The Young and the Restless (Y&R) Spoilers: Week of January 25 – Phyllis and Billy Unite With Natalie Against Victor

BY Monica DelRay on January 23, 2016 | Comments: one comment
Related : Soap Opera, Spoiler, Television, The Young and the Restless 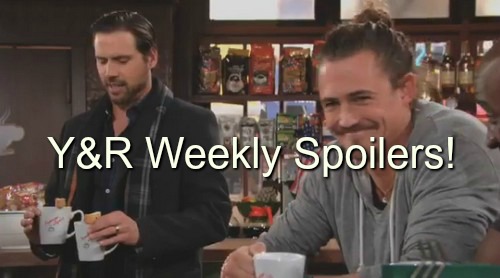 “The Young and The Restless” (Y&R) spoilers for the week of Monday January 25 through Friday January 29 reveal Adam Newman’s (Justin Hartley) safe return from his kidnapping but many lives in turmoil from the related events.

Noah Newman (Robert Adamson) knows Luca Santori (Miles Gaston Villanueva) is scheming against his grandfather Victor Newman (Eric Braeden) and wants to know what he’s up to. Is Noah thinking of turning on his granddad over the incident with Marisa Sierras (Sofia Pernas)?

Adam tries to protect Noah from Luca’s ambitions and this puts Luca on edge and results in conflict between the co-conspirators. In the wake of Adam’s release, it appears that Phyllis Newman (Gina Tognoni) is the kidnapper because of what she says to Natalie (Mara McCaffray).

Phyllis tells Natalie “You vanished on me once already…” and then offers Natalie a deal to work with her, not for her. However, Phyllis may just be taking advantage of Natalie running from Victor to scoop her up and there may yet be another party to blame for taking Adam.

Natalie, in turn, will approach Kevin Fisher (Greg Rikaart) and Mariah Copeland (Camryn Grimes) about a new deal. Phyllis tells Billy Abbott (Jason Thompson) that she’s going after Victor and Billy says he’s doing it with her – while still playing nice with Victoria Newman (Amelia Heinle) to win her back.

Jack Abbott (Peter Bergman) will take a risk and confide in Billy about something crucial. Abby Newman (Melissa Ordway) continues to have marital woes with Stitch Rayburn (Sean Carrigan) because of Max Rayburn’s (Jared Breeze) dislike of her.

Max will spend some time with Dr Simon Neville (Michael E Knight) at the Jabot Labs and the prickly doctor actually bonds with the kid. Ashley Newman (Eileen Davidson) will be around and Y&R spoilers indicate Max may take a liking to her too – which will annoy Abby.

Ashley has a serious talk with Dr Neville about her condition. She thinks it’s hopeless and his protocol isn’t working and ponders her death. But when test results show improvement, Ashley is jubilant and lays a passionate kiss on her savior – Neville is stunned but happy.

Nick Newman (Joshua Morrow) gets closer to Dr Anderson (Elizabeth Bogush) to try and figure out what she’s up to and Dr A tells Nick that Sage Newman (Kelly Sullivan) is unbalanced and should be put in Fairview for urgent treatment.

Sage rails at Nick for being a traitor to her when she sees them together – but this could be a plan between Nick and Sage to set up the doc. Dr A has Sharon Newman (Sharon Case) freaking out about Sage – Sharon now thinks that Sage is obsessed with Sully.

Dr A has Sharon on the cusp of a breakdown. Dylan McAvoy (Steve Burton) finally gets suspicious about Dr Anderson. Will he help Nick and Sage figure out who the doc is and what she’s up to? Y&R spoilers tease that Dr A’s identity will be known soon.

Don’t miss a moment of next week’s Y&R episodes and check back with CDL for day ahead “The Young and The Restless” spoilers, news and more.