The Young and the Restless (Y&R) Spoilers: Week of June 13 – Sage Back – Escape and Betrayal – Cheating and Consequences 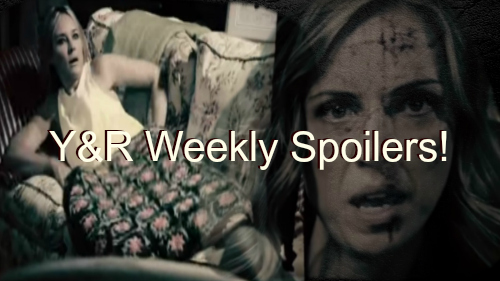 “The Young and The Restless” (Y&R) spoilers for this week’s episodes from Monday, June 13, through Friday, June 17, reveal that Sage is back from the dead, Neville’s time in Genoa City ends, Hilary’s health fails, Ian plays dirty, and Phyllis faces the music.

Young and the Restless spoilers warn us that Sharon Newman (Sharon Case) is terrified when Sage Newman (Kelly Sullivan) comes to her as a ghostly apparition and threatens her for not keeping her final wish to tell Nick Newman (Joshua Morrow) about his son.

Sharon wakes from the nightmare and Mariah Copeland (Camryn Grimes) comforts her then Dylan McAvoy (Steve Burton) walks in while they’re talking about the baby lie but Mariah covers for her mom and is torn but decides Sharon should keep lying.

Jack makes it clear to Hilary he won’t get with her. However, Hilary confesses her medical condition to Jack and says doesn’t want it getting out – she thinks people will use her weakness against her but denies seduction plans.

Hilary admits Neville’s protocol is not perfected, Jack worries about Ashley too. Jack takes off and Ashley confronts Hilary. Ashley wants Hilary out of the research project and away from Jack. There’s a twist coming that will send Neville out of their lives.

Y&R spoilers indicate the Jabot research project goes awry and we know Michael E Knight has just a few episodes left as Dr Neville so any hopes fans had for a Simon-Ashley romance will be dashed soon as he is gone, gone, gone.

Victoria is angry that he lied about his past and accuses him of rigging the Newman oil rig disaster.  Victoria is torn over trouble at work versus her feelings for Travis. Someone surprises Vic by encouraging her to give love a chance.

Phyllis Abbott (Gina Tognoni) and Billy Abbott (Jason Thompson) neither one wants to hurt Jack. Too bad they can’t keep their hands off each other. Billy demands they tell Jack but Phyllis insists she has to do it alone.

Phyllis heads to meet Jack at the GCAC. We see a scenario where she confesses all to her hubby who is enraged that she slept with his brother. But it’s not real! She was just playing the scene out in her head and sees how bad it could be.

When Jack presses Phyllis why she’s upset and why Billy is on her mind, The Young and the Restless spoilers tell us that Phyllis will admit to Jack that she can’t past the Marco Annicelli (Peter Bergman) issue. Looks like this could drag on for a while with Phyllis playing a dangerous brother game.

Billy tells Bethany Bryant (Chrishell Stause) that he loves Phyllis so if he carries on with her, it’ll be a casual thing. Bethany surprises Billy and says it’s cool, she can be with him knowing that she’s not who he loves.

Victor Newman (Eric Braeden) wants to put his family back together since he sees how broken they are. Victor hatches a new plan to get Adam Newman (Justin Hartley) back in his pocket but Adam is too close to Ian Ward (Ray Wise) now.

Paul Williams (Doug Davidson) and Christine Williams (Lauralee Bell) get some evidence they weren’t expecting, but is it about the suicided lab guy or Constance Bingham? Looks like there’s enough evidence to bring Adam to trial.

Michael Baldwin (Christian LeBlanc) advises Adam not to testify because his anger and hatred for Victor might come out and make him look unsympathetic. Adam goes back to see Ian again and they talk about his testimony.

Adam realizes the request to make his statement in court is part of a plan Ian has to escape prison. Adam decides he doesn’t care as long as Ian testifies for him before he disappears. Adam agrees to help Ian put his plan in motion.

But once Chelsea Newman (Melissa C Egan) demands that Adam come clean on what he’s planning, he fills her in on the Ian scheme. Chelsea doesn’t like it and thinks Ian is tricking him and will do something horrible then escape.

Phyllis and Nick scheme to break up Luca and Summer Newman (Hunter King) but things backfire. Luca realizes he’s fallen hard for Summer. Will Summer run off and elope with Luca so he can have his dream of being a Newman fulfilled?

This has to play out soon since Hunter King is cutting back her appearances. By the end of the week, Dylan and Nick have had enough and confront Sharon together. Also, Kevin Fisher (Greg Rikaart) helps Dylan dig into a mystery.

All this and more on the Y&R episodes the week of Monday, June 13. Check back with CDL often for day-ahead “The Young and The Restless” spoilers plus news and more.