The Young and the Restless (Y&R) Spoilers: Week of May 23 – Adam’s Arrest – Jill Back – Victor’s Divorce – Bethany’s Debut

BY Marcy Cohen on May 22, 2016 | Comments: 2 comments
Related : Soap Opera, Spoiler, Television, The Young and the Restless 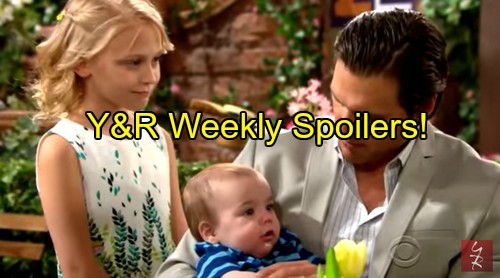 “The Young and the Restless” (Y&R) spoilers for this weeks episodes, Monday, May 23 through Friday, May 27, will have viewers of the CBS soap thrilled and shocked as May sweeps wind up. Y&R spoilers tell us that Adam is arrested for murder and a new character makes her debut. We will see Victor served with divorce papers, face family confrontations and more romance with the doc, Jill is back, and Luca’s scheming escalate.

Adam Newman (Justin Hartley) is confident that having Constance Bingham’s (Sally Kellerman) body exhumed will exonerate him, but instead it makes things worse. The Young and the Restless spoilers say it looks like the autopsy has the cops thinking there’s foul play involved in her death.

Adam and Chelsea Newman (Melissa Egan) think that Luca Santori (Miles Villanueva) might be behind the trouble. They get Luca to admit he had Adam fired from his new job but Luca plays dumb on the journal forgery. Dylan McAvoy (Steve Burton) was ready to believe that Adam was innocent.

However, Dylan then has to arrest Adam based on the journal and autopsy results. Nick Newman (Joshua Morrow) thinks that Sage Newman (Kelly Sullivan) was weighed down by the truth of Constance’s murder – but that wasn’t the case since it was the Christian paternity issue that was on her mind.

Nick isn’t sure if he thinks Adam is guilty or not and wonders if his dad might be involved. Nick is frustrated and goes to see Victor Newman (Eric Braeden) to confront him on this issue. Nick has harsh words for his dad.

Will Victor admit to tampering or is he ready to let Adam go down – is The Moustache even involved in this disaster for Adam? Michael Baldwin (Christian LeBlanc) also asks Victor if he set Adam up.

Mariah Copeland (Camryn Grimes) is outraged that Sharon Newman (Sharon Case) is still hiding the Christian truth from Nick. Mariah pushes Sharon to do the right thing but Sharon counters that she can’t hurt Dylan that way.

Nikki Newman (Melody Scott) serves Victor divorce papers in prison but Summer Newman (Hunter King) warns him so he’s prepared. Will this be the tipping point that allows Victor to move even closer to Dr Gates (Alicia Coppola).

Victoria Newman (Amelia Heinle) is annoyed that Summer and Luca are tampering with Newman Enterprises. Luca reminds Victoria that Summer is her lifeline to Victor and she should keep her close and use that leverage.

Also this week, Jill Abbott (Jess Walton) is back and makes a big fat donation to Jack Abbott (Peter Bergman) and Neil Winters’ (Kristoff St John) charitable foundation. Cane Ashby (Daniel Goddard) hangs with Jill and they spend time talking about the impact Kay Chancellor had on her life.

Jill is annoyed when Hilary Curtis (Mishael Morgan) butts into their conversation and Jill shares that she hates the way Hilary has crept into their lives like a cancer. Jack and Neil will decide to name a wing of their new facility in Kay’s honor.

Also, it looks like Jill is back for a while and may move into Billy Abbott’s (Jason Thompson) place and cramp his style. Also, will Adam have to reveal to Nick what was in the letter Sage Newman (Kelly Sullivan) left him to get him to back off this Constance murder thing?

We’re wondering if Nick will find out first that Christian is alive or that Christian is NOT his son. The web around that poor child continues to get stickier and more convoluted. Adam has to prepare a defense and it looks like his court date will approach fast as he faces murder charges.

Mid-week, Phyllis Abbott (Gina Tognoni) rejects Billy and tries to reconnect with Jack. That sends Billy out boozing where he meets new gal in town Bethany Bryant (Chrishell Stause). Turns out Bethany knew Billy from back when he owned On the Boulevard.

Bethany had a crush on him then and still does and makes it obvious to Billy that she’s into him. Billy takes naughty girl Bethany home with him and that should make Phyllis jealous. Hilary’s ambition continues to cause marriage problems and she’s got her eye on Jack.

All this and more on this week’s episodes from Monday, May 23, to Friday, May 27, on Y&R. Be sure to come back to CDL every day for day ahead “The Young and The Restless” spoilers plus news and more.