‘The Young and the Restless’ Spoilers: Will Kelly Return to Torment Jack and Phyllis, Turn Stitch’s Life Upside Down? 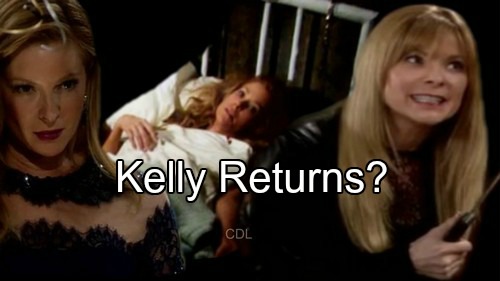 The Young and the Restless (Y&R) spoilers tease that Victor (Eric Braeden) may not be the only one Jack (Peter Bergman) and Phyllis (Gina Tognoni) have to worry about. There’s another enemy that could be lurking. Y&R viewers know that death basically means nothing on a soap. No one can ever say with certainty that a character is gone for good.

With that in mind, could Kelly (Cady McClain) make a return to the CBS soap? Phyllis is currently involved in a love triangle with Jack and Billy (Jason Thompson). Of course, Jack doesn’t know he’s competing with his own brother for his wife’s attention. We also have Jill (Jess Walton) to stir the pot, but all of this should be resolved eventually.

Once Phyllis’ affair with Billy is exposed, Jack may be willing to forgive her. Let’s say they make a true effort to rebuild their relationship. Naturally, we’d need some new drama to shake things up. It would be the perfect time to throw Kelly in the mix.

When we last saw Kelly, she was in bed next to Jack on the island where she held him captive. Jack looked at Kelly’s dead body and noticed he had blood on his hands. However, this “death” could easily be explained.

Perhaps Victor’s minion took away Kelly’s body only to discover that she had a faint pulse. She may have recovered somewhere without Victor’s knowledge. Unlike Victor, his lackeys might have been willing to show mercy. There’s always the possibility that she wasn’t even the real Kelly.

Victor found Marco (Peter Bergman) in a Peruvian prison. He looked and sounded exactly like Jack. Victor obviously knows all the good doppelganger hot spots. A fake Kelly surely wouldn’t have been difficult to find. Kelly could’ve been swapped with a phony at any point throughout Jack’s ordeal.

A lot of Y&R fans might ask why. Well…why not? It doesn’t have to make perfect sense on The Young and the Restless. They’re not afraid to go for something off the wall. Plus, it would give Jack and Phyllis another round of drama once their affair storm has passed.

Even if that was merely a Kelly lookalike on the island, it’s obviously been proven that the real one is unstable. She could come back in hopes of tempting Jack and taking down Phyllis. Kelly might plot Phyllis’ murder to get her out of the picture. That would open up plenty of storyline doors. What if Billy managed to save Phyllis? It could draw them back together.

Regardless of what Kelly might cook up, it would be interesting to see how Stitch (Sean Carrigan) would react to her sudden appearance. Who knows? Mad Max (Jared Breeze) could become Kelly’s little menacing protégé. We’re not sure we’re buying the tumor excuse. This kid might be bad news.

We can’t forget that Maureen (Meredith Baxter) killed her husband and let Stitch take the fall for it. What kind of mother lets her kid take the rap for that? It’s clear that this family is messed up. Stitch is kind of boring on his own, but having his crazy sister around would provide some lively updates to his humdrum existence.

Would you be on board with Kelly’s return to The Young and the Restless? Would you like to see Kelly torment Phyllis and Jack? How would a potential Kelly comeback affect Stitch and Max? Voice your opinion in the comments below and don’t forget to check CDL often for the latest Young and the Restless spoilers, updates and news.