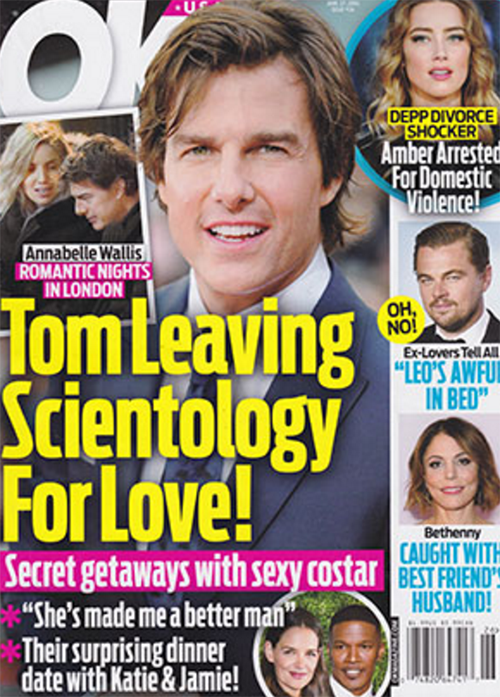 Is Tom Cruise leaving Scientology on account of his reported new girlfriend, Annabelle Wallis? Yes, we know, another headline speculating about the fading star’s movements. Allegedly, he is exiting the controversial church, and it’s all because of a woman, an actress named Annabelle Wallis.

Wallis and Tom Cruise both star in the upcoming reboot of The Mummy. He’ supposed to be very infatuated with the 31-year-old actress, and they have reportedly embarked on top secret romantic getaways together. Tom might be ready to commit and take things further, but Wallis isn’t having any of it. A source for Ok Magazine has claimed she won’t commit to him unless he leaves Scientology. As long as he continues to remain a practicing member of the church, she won’t even consider settling down with him. We say, go girl!

We’ve seen Tom’s antics and strange behavior before, so this could perhaps be another publicity stunt on his part. Remember his appearance on the Oprah Show where he jumped around and seemed a little too happy? He doesn’t mind a bit of drama every now and again.

The source also stated: “The buzz in Tom’s circle is that he’s ready to walk. Absolutely nobody saw this coming; Annabelle must have really bowled him over to get him to even think about quitting.” Right, sure. Tom Cruise leave Scientology? Highly unlikely, we think. And we doubt he can be that secretive.

If he believed any of this to be remotely true, David Miscavige would step in and end the relationship so fast, Tom wouldn’t know what hit him. Tom’s one of the celebrities who gives money to scientology – and in incredible sums. What would they do without his financial contributions? He’s been the largest proponent of the religious practice for decades.

We have witnessed other celebrities, namely Leah Remini, exit the church. While it’s not impossible for other people to do, Scientology would not let go of Tom Cruise easily. It’s just not going to happen. If Cruise left Scientology, it would be one of the biggest celeb news stories of the year (or of the past decade). Guess we’ll just have to wait and see what happens in the near future.

Tell us what you think about the prospect of Tom Cruise leaving Scientology in the comments section below.