‘Top Chef’ spoilers include news that season 14 will be Rookies vs. Veterans. Bravo has released a first look preview and a full list of names of the newbies and the returning chefs. As previously announced, ‘Top Chef’ Season 14 was filmed in Charleston, South Carolina. Rookies vs. Veterans will premiere Thursday, December 1 at 10 p.m. on Bravo.

Fans of the Emmy Award winning cooking competition have been waiting for the list of names of the rookie chefs and the veteran chefs chosen for ‘Top Chef’ season 14. The full list is finally available, as well as a sneak peek at what to expect.

The rookie chefs include Annie Petty, executive chef and owner of Deca in Louisville, Kentucky. Another executive chef and owner, BJ Smith of Smokehouse 21 in Portland, Oregon, will compete against the veterans. From Charleston, South Carolina comes Emily Hahn, chef at Warehouse Bar + Kitchen. Gerald Sombright the chef de cuisine from Ario in Marco Island, Florida brings 15 years of experience to the ‘Top Chef’ kitchen.

New York native Jamie Lynch, executive chef and partner of 5Church Group in Charlotte, North Carolina, has a degree in culinary arts from the New England Culinary Institute. Jim Smith, executive chef of the State of Alabama and the Chairman of the Alabama Marketing Commission will compete for the honor of being called ‘Top Chef.’ Silvia Barban, chef and owner of Aita Restaurant and LaRina Pastifico e Vino, began her culinary career under the watchful eye of the Maestro of Italian cuisine, Gualtiero Marchesi. Rounding out the 8 newbies is Sylva Senat whose restaurant Maison208 will be opening sometime in the winter of 2016/2017.

‘Top Chef’ spoilers for season 14 give fans the names of the chefs returning to the competition. Their reputations precede them, but we’ll remind you in which season the participated. Sam Talbot placed third in Season 2: Los Angeles.’ Casey Thompson was one of the cheftestants chosen to compete in Season 3: Miami and also Season 8: All-Stars and will be back again. Brooke Williamson from Season 10: Seattle will be back to compete in the ‘TC’ kitchen. 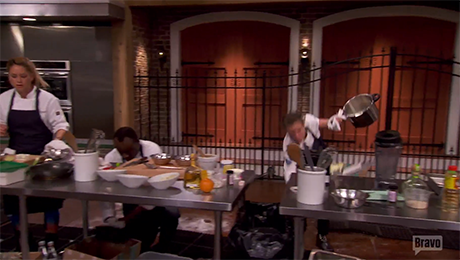 Also from Season 10: Seattle, Sheldon Simeon will go up against an experienced group of rookies. Another Season 10: Seattle contestant, John Tesar, from Dallas, Texas will be back to compete for the ‘Top Chef’ title. Shirley Chung, Season 11: New Orleans and Kalsuji Tanabe, Season 12: Boston, have also been chosen to compete in ‘Top Chef’ Season 14: Charleston.

There you have it ‘Top Chef’ fans, the complete list of Season 14: Charleston cheftestants. Tom Colicchio, Padma Lakshmi and Gail Simmons will be joined at the judges table by ‘Top Chef: Masters’ alum Graham Elliot.