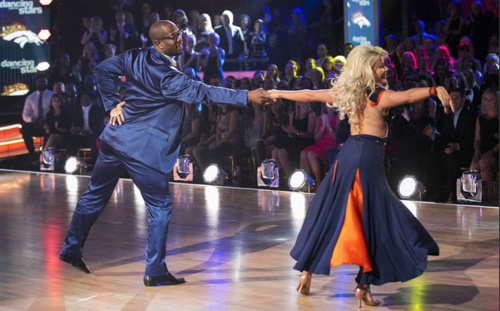 Tonight on ABC the 12 celebrities returned to the “Dancing With The Stars” Ballroom for “Latin Night.”  Von Miller & his professional dancer Witney Carson Hit the dance floor and danced a Cha Cha to “Ain’t Too Cool” by LunchMoney Lewis.  Did you watch tonight’s episode? If you missed it we have a full and detailed recap, right here for you. Did you miss any of tonight’s performance videos? If you did we have them all, right here for you!

The dancers will open the show with an exciting number to the song “Shake That,” by Samantha Jade featuring Pitbull, and then each celebrity will go on to perform a captivating and alluring Latin dance.  At the end of evening, one couple will be eliminated from the ballroom competition.

Judges comments on Von’s DWTS Week 2 Cha Cha:  Carrie Ann: “You look at ease but in general I thought you were dancing a little too small. You are a big man, I want you to own the floor, I felt like you only took 30% tonight.” Len: “It was tasty in places but there were some funny bits here and there. Overall, well done. “ Bruno: “The Cha Cha was lost in translation, it was drowned with his personality. But, good performance.”

Watch the video below and let us know what you think, do you agree with the judges comments? Do you think Von did enough to avoid elimination tomorrow? Sound out in the comments and let us know your thoughts?