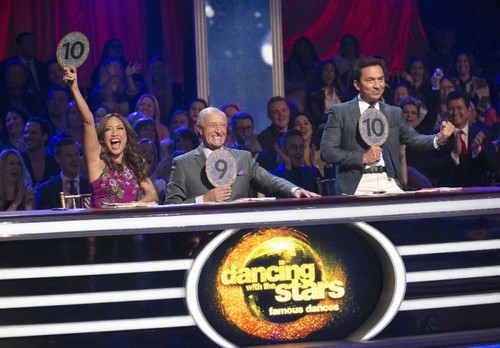 Who will be voted off Dancing With The Stars Season 22 Week 8? DWTS 2016 spoilers tease that another celeb and their pro partner will be eliminated on Monday, May 9. The competition is really heating up on the ABC dance competition, and only six teams remain in the competition.

Dancing With The Stars Week 8 will be the ‘Judges Team Up Challenge.’ Each judge will be paired with two teams – they will pick their dances, their songs, and creative aspects of the performance. We combined last week’s scores with our own speculation, and put together our list of Week 8 predictions. Let you know who you think will be eliminated in our DWTS poll!

We’re getting down to the nitty gritty on Season 22 of Dancing With The Stars, and competition is FIERCE. But, Ginger Zee and Val Chmerkosvkiy scored one of the first perfect scores of Season 22 last week – which pretty much guarantees their safety. Of course, Ginger and Val’s solid fanbase definitely help seal the deal. DWTS spoilers tease that for Week 8 Ginger Zee and Val Chmerkovskiy will be dancing the Argentine Tango to “Telephone” by Lady Gaga featuring Beyoncé.

Paige VanZant and Mark Ballas are the other team that scored a perfect score last week. Not only is Paige easily one of the most skilled dancers in Season 22, but her UFC roots seem to have gotten her a pretty solid fanbase and a ton of votes from viewers at home. It would be truly shocking if Paige and Mark were eliminated next week. According to spoilers for Week 8 of Dancing With The Stars, Paige VanZant and Mark Ballas will be dancing the Viennese Waltz to “Stone Cold” by Demi Lovato.

Nyle DiMarco and Pate Murgatroyd are still delivering solid scores week by week. Although, Nyle seems to have lost some of the buzz that he had at the beginning of the season – pletly of people are still clearly voting for him. No one would be surprised if the ‘America’s Next Top Model’ winner and Peta went to the finals. DWTS Week 8 spoilers tease that for ‘Judges Team Up Challenge,’ Nyle DiMarco and Peta Murgatroyd will be dancing the Paso Doble to “Victorious” by Panic! At The Disco.

Wanya Morris is an amazing dancer and the Boyz II Men singer and his pro partner Lindsay Arnold have been getting amazing scores and feedback from the judges. However, Wanya Morris just doesn’t seem to be clicking with the fans at home. Despite being at the top of the leaderboard last week – he was still in danger of being eliminated. Sadly, it could really go either way in Week 8. DWTS spoilers tease that for ‘Judges Team Up Challenge,’ Wanya Morris and Lindsay Arnold will be dancing the Jive to ”Can You Do This” by Aloe Blacc.

Full House star Jodie Sweetin and Keo Motsepe were predicted to be a huge force to be reckoned with in Season 22 of DWTS. But, they seem to be struggling week by week. Although Jodie and Keo scored a 26 last week, general consensus on social media was that the judges were a little too generous with the couple. The weeks are winding down and someone has to go home – it wouldn’t come as a surprise if those someones were Jodie Sweetin and Keo Motsepe. For Week 8 Jodie and Keo will be dancing the Jive to “Something’s Got a Hold on Me” by Christina Aguilera.

There must be a lot of NFL fans at home voting for Antonio Brown, because his dancing skills alone have definitely not got him this far. Now that Von Miller is gone, there really is nothing standing between Antonio Brown and elimination. Every DWTS fan will be surprised if Antonio and Sharna survive another week. Dancing With The Stars spoilers tease that Antonio Brown and Sharna Burgess will be dancing the Viennese Waltz – “Love on the Brain” by Rihanna.

So DWTS fans, who do you think will be voted off Week 8? Will it be Antonio Brown, Jodie Sweetin, or another unexpected elimination? Vote in our poll below and let us know, and don’t forget to check CDL for all of your Dancing With The Stars 2016 spoilers and news.