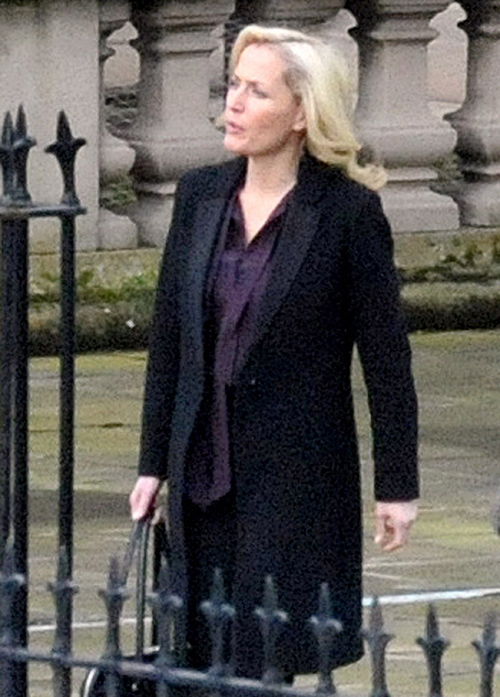 Well, this isn’t going to exactly help quiet those Gillian Anderson and David Duchovny dating rumors. As you all know, Anderson played David Duchovny’s on-screen love interest during the wildly popular ‘X-Files’ and then again during the recent reboot.

Diehard fans of Gillian Anderson and David Duchovny are certain that the couple is (and has been for a long time) dating in real life – however, neither star would ever confirm it. A popular internet theory is that Anderson might even be the real reason behind David’s divorce from ‘Madam Secretary’ star Tea Leoni.

Gillian Anderson recently appeared on an episode of Andy Cohen’s ‘Watch What Happens Live.’ The talk show host put Gillian on the spot during a game of ‘Plead The Fifth’ and told her to rate Duchovny and Jon Stewart’s kissing skills. Gillian also played a love interest for Stewart in a 1998 movie, ‘Playing By Heart.’

Once Gillian got done laughing hysterically at Andy’s question, she revealed that she doesn’t even remember kissing Jon Stewart – so he couldn’t have been that good of a kisser. But, she gave her ‘X-Files’ co-star David Duchovny a solid 8, on a scale of 1-10.

This is one of Gillian’s more candid interviews. Sadly, she didn’t discuss her off-screen relationship with Duchovny, we’re pretty sure her “people” informed Andy Cohen that if he brought up the dating rumors, she wouldn’t do the appearance, which is not unusual in Hollywood.

In 2015, David Duchovny tried to shut down rumors that he and Gillian Anderson were an item. But, she followed up with a bizarre statement in an interview with The Edit earlier this year. In regards to her and David’s relationship, Gillian dished, “People know we are good friends now and that we’ve found our way into an adult friendship,” Gillian Anderson tells The Edit. “But there is something that will always remain between us, a kinetic energy that is tangible when you see us in a room together.”

Whether or not Gillian and David do any kissing off-screen, we now know for sure that Anderson definitely enjoyed kissing him on-screen. Do you believe the rumors that Gillian and David are dating? Share your thoughts in the comments below!