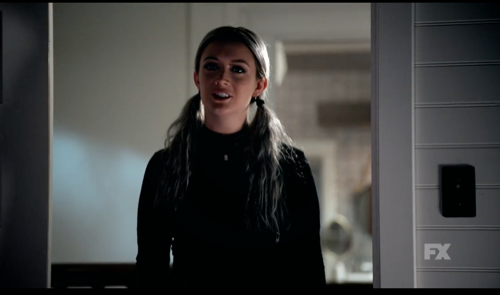 American Horror Story: Cult (AHS: Cult) begins tonight with Ally Mayfair-Richards (Sarah Paulson) running and screaming from her bedroom, down the stairs to her wife, Ivy (Alison Pill) saying there is a clown in bed with her. Ivy grabs a knife when Ally reminds her their son, Oz (Cooper Dodson) is upstairs in his bed.

Ally apologizes and swears this can’t be her imagination as Ivy admits she doesn’t know how much more of this she can take. Ally says she doesn’t know what is real any more; Ivy says they are real and what they have is real. Meanwhile, Ozzy wakes up when someone shuts off his nightlight; he crawls out of bed, puts on his glasses, turns it back on and finds Twisty the Clown (John Carroll Lynch) standing over him. He runs into the bathroom and hides inside the bath tub; the 2 clowns break into the bathtub and as his moms are kissing in the bedroom, he screams. They think he had a night terror and Ivy comforts him.

On the news, they are reporting the video of Kai Anderson (Evan Peters) being badly beaten by immigrant workers; the video was made by Meadow (Leslie Grossman) and Harrison Wilton (Billy Eichner) and they hope the video will help them convict them quickly and deport them. Kai has a press conference where he announces he is running for city council, for the seat left empty by Councilman Chang who was murdered. He says for everyone to vote for the man who can take their fear away.

Outside, Ally watches Meadow across the street with a rental truck. When the truck leaves, Ally walks up the steps and peeks through the windows, until she is caught by the man in the white contamination suit.

Ally arrives at work, finding the Mexican staff being berated by one of their staff; she goes off to find Ivy as Winter Anderson (Billie Lourd) brings Oz home from school; she calls his name and when he doesn’t respond she follows him up to his bedroom. He insists he has homework, and she has a gift for him. She says she told his moms that he imagined what happened across the street because people are going to believe what they want to believe, but the trick is learning to give it to them.

Oz is scared the clowns will come back for him but she says no one knows he is a witness. She tells him to give her his pinkie; pinkie to pinkie they are connected, flesh to flesh and if he lies, she will know. She talks about what he saw, he says he is nervous about people moving in the house; she cuts him off saying its fear and he needs to give her his fear and it will make them both stronger.

Harrison and Meadow introduce themselves, saying the get a kick out of how kids love the bee colony. Ivy introduces herself and Ally, Meadow says its great for the value of the home to have lesbian neighbors. Ally apologizes for snooping earlier, Harrison and Meadow make fun of the murder/suicide that happened and felt the owners would be motivated to sell. Ivy is impressed with their honesty. Harrison gets back to explaining about the hive, as every single member of the hive is completely dedicated to their task, there is no fighting, no complaints nor arguments. He says they admire them and meadow asks if they would like some lemonade as she needs to get out of the sun.

Meadow offers them a drink and says she can’t drink the stuff without thinking of Beyonce now. Meadow talks about having skin cancer and cannot be out in the sun for more than 10 minutes but says they will all get cancer due to global warming. She quit her job, saying she works from home now. Meadow reveals that Harrison is gay, and they are only married because they made a pact in high school if they were still single at 35, they would marry each other.

Meadow says they have blabbered on but when she asks them about their lives, Ally grabs Ivy and says they need to go home to give Ozzy a bath. Ally asks if it upsets them to be living in the house so soon after it happened; they say they don’t scare easily. Ally looks at the blood stain on the floor and the clown face on the door and leave.

At home, Ally is curious about the barrels as Ivy says they are just eccentric and isn’t suspicious about them at all. Ozzy interrupts them, saying he doesn’t want to sleep in his bedroom. Ivy calls him into their bed but is called out to work as the alarm system has gone off. Ally suggests she can go instead and promises to be maybe an hour.

Ally arrives at the restaurant, it doesn’t look like anyone broke in so she goes inside. She disarms the alarm, but a noise distracts her and she walks into the freezer; the lights aren’t working. She sees a massive puddle of blood, and turns around screaming as she sees one of their staff hanging on a meat hook.

Ally and Ivy have bars installed around their doors and windows; Ivy comes inside with Dr. Rudy Vincent (Cheyenne Jackson) who just happens to be in the neighborhood. Ivy goes to pick some herbs for the restaurant but encourages Ally to talk to her psychiatrist. He admits he is the one who reached out when she missed here appointments. He brings up the murder in the restaurant the previous week.

Ally reveals that Roger was still alive when she found him but when she tried to save his life, he fell completely on the meat hook and killed him. She says the police Detective Samuels (Colton Haynes) wanted to pin it on the usual suspects. He wants to know what Mr. Morales immigration status is, and Ally insists he is American.

Ally recalls seeing the gun collection of Meadow and Harrison. He offers her a gun saying its the only thing that will make her feel safe again. Ally places the gun on the counter in front of Dr. Vincent, who says this is something she definitely needs to talk to her wife about and she says no, holding him to the patient/confidentiality clause. Outside, he tells Ivy that she is showing signs of early agoraphobia, and she needs to keep an eye on her; she suggests the nanny can help with that. When he says there is nothing else to worry about she isn’t reassured by his words.

There is a knock at the door, Ally pulls out a knife and its Kai; she says she recognizes him as the guy on television and also the asshole who threw his latte on her and Ivy. She is sure it wasn’t an accident, he says he is running for city council and wants to be remembered as a man who made a real difference. He asks if he can come in to tell her some of his ideas and she refuses.

He asks when was the last time she felt safe and not running around scared all the time. She tells him she is more interested in building bridges, not walls with people after he talks about the criminal activities of immigrants. He questions her why the strong bars and knife behind her back if she was safe; asking if she will melt all that metal down to build a bridge. He taunts her and when she tells him she is going to call the police; he reminds her that is so easy until its her they are coming for. She slams the door in his face.

Ivy and Pedro talk in the meat locker, where he admits its scary to be brown these days. Ozzy asks if his moms will be back to tuck him in and Winter asks if he wants her to do it; he says no. She tells him good night but as she leaves, he asks her if they can do the pinkie thing again as he is worried they will come back to him in his dreams as sometimes he doesn’t know if he is awake or asleep; she tells him if he isn’t sure to just ask.

Ally sits and stares at her bottle of pills; Winter startles her saying she seems more uptight than usual. She doesn’t want to take the pills, Ivy wants her to take because they make her groggy. Winter suggests some red wine and some bath salts to unwind; she prepares the bath and when Ally says she doesn’t need to do that; Winter takes her shirt off. Ally says she can take it from there and Winter leaves to check on Oz.

Ally is relaxing in the bathtub when Winter returns and shocks her. She tells her to lean forward, Oz is sound asleep and she begins to wash her with a sponge on the back, encouraging Ally to release all the tension and let it all go. Wally is shocked at where Winter is touching her, she tells her to don’t stress as she won’t tell her wife about not taking the meds. Suddenly the house alarm goes off and the lights go out.

Ozzy sees a clown and asks if he is awake or is this real; the clown says he is asleep and leaves his room as he turns over again to sleep. Ally searches the house for candles, tells Winter to light as many as she can after she learns Oz is still sleeping. Harrison arrives at the window saying 8 states just went dark at the same time and the news is claiming it is terrorism. He gives her some candles made from his beeswax and says this should ride out until then and tells them to stay inside.

Winter gets her coat on and Ally pleads with her to stay; but she leaves anyways to make sure her own stuff is secure. Ally calls Ivy freaking out, she says she is feeling paralyzed and needs her but Ivy says she needs to get the backup generator going or they will lose everything in cold storage; the phone dies. Ivy asks Pedro if she was mean and he says that he talks to his wife like that. She gathers the candles and charger for Ally and asks Pedro to bring it to her.

Ally is freaked out, double checking all the bars on the windows. Outside she sees the ice cream truck that Oz saw before. She places chairs in front of all the doors and screams that the security system isn’t working. She notices all the wires are cut in the electrical box and when she closes it, there is a clown in front of her. She screams but when she opens her eyes he is gone.

She runs up the stairs and shoves another clown over the bannister; she finds her gun and rushes to Ozzy’s room, waking him up and telling him to come with her. She tells Ozzy when she opens the door, he needs to run like the wind to the neighbors and to not let go of her hand. She opens the door and fires her gun, shooting Pedro, who drops to the ground.