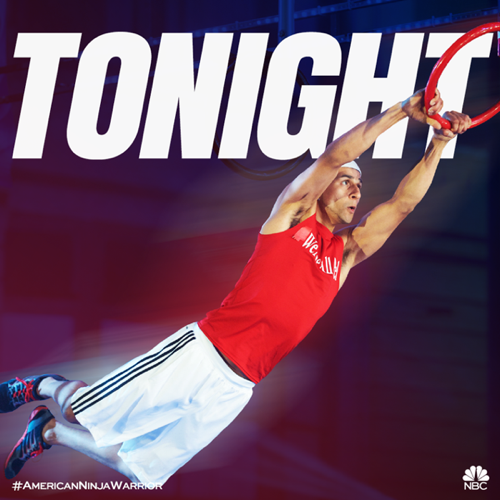 Tonight on NBC their obstacle course competition American Ninja Warrior returns with an all-new Monday, July 31, 2017, episode and we have your American Ninja Warrior recap below!  On tonight’s “Cleveland Qualifiers,” season 9 episode 8 as per the NBC synopsis, “The Top 30 competitors from the San Antonio Qualifier tackle the City Finals course, which includes the Salmon Ladder, Hourglass Drop, Elevator Climb and Spinball Wizard.”

It is the San Antonio city finals tonight and Matt and Akbar welcome an enthusiastic crowd. Contestants will compete for a chance to move on to the finals in Las Vegas. Kristine introduces the ten obstacles tonight and they are: the Floating Steps, Tic Toc, the Spinning Bridge, the Sky Hooks, the Pipefitter, the Warped Wall, the Salmon Ladder, the Hourglass Drop, the Spin Ball Wizard and finally the Elevator Climb. If a contestant can finish all ten obstacles they will be guaranteed a spot in Las Vegas.Nate Burkhalter is the first to attempt the course. Nate is a

Nate Burkhalter is the first to attempt the course. Nate is a 31-year-old engineer from Stavanger, Norway. Nate starts enthusiastically but can’t make it passed the Hourglass Drop and falls into the water. His fans are devastated at his failure. During the commercial break Victor Juarez and Brittany Hanks both attempted the course but were unsuccessfully. Sam Ballard is up next. He is a 32-year-old Warehouse Manager from Bartlesville, OK. He doesn’t consider himself an athlete but he has a spark for life and watches the show every week with his father. He father was recently diagnosed with leukemia and Sam wants to complete the course to honor his father. Unfortunately, the Pipefitter proves to be too much for Sam and he falls into the water. His father is proud of Sam for trying.

Abel Gonzalez is a 33-year-old gym owner from Edinburg, TX and started the course while the show as at a commercial. He easily completes the first seven obstacles but the Hourglass Drop was more than he bargained for and Abel falls into the water. The next athlete to attempt the course is 36 year old, personal trainer, Karsten Williams who is from McKinney, TX. He is a familiar name to American Ninja Warrior as he has made it to the national finals in the last three seasons of the show. He gets the furthest then any other contestant but the Spin Ball Wizard is too much for Karsten. He may make it to the finals if the other contestants also are unable to complete the course.

Sherrie Laureano, Cass Clawson, Jared Bandy and Kevin Klein all quickly fail the course and will not move on to the finals in Las Vegas. While we were at the commercial three more athletes attempted the course and failed. They are Jonathan Parr, Blake Devine and Kaiti Haymaker. Hometown hero, 23 year old gym owner, Thomas Stillings is next to attempt the course. He is from San Antonio, TX and has a large cheering crowd egging him on. Thomas is recently engaged and wants to win for his fiancé. Thomas makes it further than any other contestant but just can’t finish the last obstacle. While he is disappointed it is highly likely he will make it to Las Vegas.

Next up is Jonathan Horton who is a 31-year-old former Olympic gymnast from Cypress, TX. Injuries forced him out of the last Olympics. Jonathan’s entire family is on site to wish him good luck and cheer him on to victory they hope. Jonathan can’t make it passed the Hourglass Drop and his time is slow enough that he might not make it to the finals in Las Vegas (only time will tell based on the other athlete’s performances). Kacy Cananzaro is a 27-year-old, gym owner from San Antonio, TX. She is the first woman to make it up the Warped Wall and the only woman to finish a finals course. Kacy is the first woman of the night to make it passed the Sky Hooks. Kacy is now guaranteed a spot in the finals in Las Vegas but how far will she go. The Warped Wall is just too much for Kacy and after three attempts she just can’t get to the top of the wall.

Two more contestants were knocked out during the commercial break. Both Tremayne Dortch and Brian Burkhardt could not make it passed the Hourglass Drop. So far half the contestants have been done in by this obstacle. Kenny Niemitalo, a 30-year-old construction worker from Trinity, NC is the next athlete to attempt the course. His one-year-old daughter needed a kidney donor and during the last year’s America Ninja Warrior telecast a viewer saw his story and donated a kidney to his daughter. Both his daughter and the donor are here tonight cheering Kenny on. Unfortunately, the Hourglass Drop knocks Kenny out of the race.

Will Smithee, Brandon Pannell, and Jody Avila all failed during the commercial break. Nicholas Coolridge is a 28-year-old acrobat from Venice, CA and his making the course look easy. He gets up the Warped Wall in his first attempt. He makes it half way up the last obstacle but runs out of steam and just can’t complete the Elevator Climb. It is possible no one will successfully complete the course tonight. While we were at a commercial three more athletes attempted the course. Tanr Ross, Damir Okanovic and Grant Clinton all cannot finish the course but Damir’s time is good enough to earn him a spot in the Las Vegas competition.

Barclay Stockett, a 22 year old gymnastics coach from Dayton, TX is the next woman to attempt the course. Barclay makes it up the Warped Wall on her first attempt and moves on to the Salmon Ladder. This is the furthest a female athlete has made it on this course tonight. Unfortunately, she doesn’t complete the Salmon Ladder but she will move on to the Las Vegas competition. While we were at commercial two more Ninja’s tried to make it to the national finals in Las Vegas. Both Josh Salinas and Andrew Lowe were done in by the Hourglass Drop.

Thirty-six year old, gym owner, Brett Steffensen is an 8 time American Ninja Warrior competitor. He is from Antonio, TX and trains military personnel using Ninja like obstacles. Brett easily finishes the first 9 obstacles and may be the first to finish the course if he can get passed the Elevator Climb. He just can’t do it and loses his grip before he can reach the buzzer at the top of the climb. Daniel Gil is the final runner of the night. So far no one has finished the course. Daniel is a 23 year old Worship leader from Houston, TX. Daniel recently got married and his new wife is on site to cheer him on. Daniel makes it look easy and knocks Nate Burkhalter out of the top 15. Daniel is guaranteed a spot in Las Vegas and Nate will not move on. Daniel finishes the course in 5:50.65. He is the only athlete to finish the course and is thrilled to move on Las Vegas as the one to beat.THE END