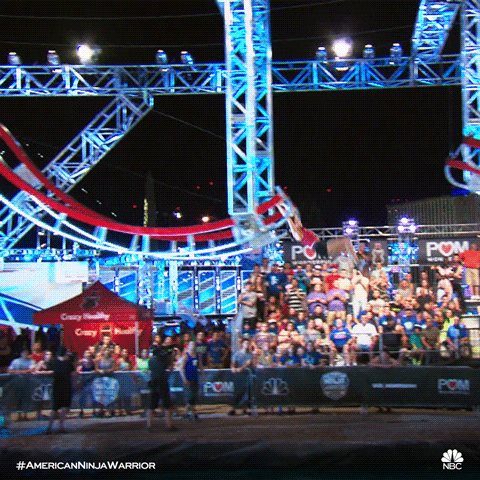 Tonight on NBC their obstacle course competition American Ninja Warrior returns with an all-new Monday, September 11, 2017, episode and we have your American Ninja Warrior recap below!  On tonight’s “Las Vegas – Finals Night 2,” season 9 episode 13 as per the NBC synopsis, “The National Finals continue in Las Vegas, where the season’s top competitors tackle a four-stage course.”

‘American Ninja Warrior’ opened with a brief message for Kacy Cantazero. Kacy led the way for most women on the show and she proved that women could clearly keep up with their male competitors however Kacy has gained some competition lately and so many were wondering if Kacy would shine tonight. But before the show could once again show Kacy at her best, the others competing tonight had to earn their spot in the finals.

The show has added a few new courses that some of their former contestants weren’t used to. However, tonight Rigel Henry with all of his supposed Hollywood looks had somehow managed to fail on a familiar course. Rigel slipped on the Jumping Spider after he failed to get one foot up on time and so he crashed out on an obstacle that had taken out lesser men before him yet luckily didn’t mess with all of his golden hair. So the contestants this year were a bit different because they had a certain flare to them.

Yet, in the beginning, they were many that struggled with simply completing the course. Benjamin for example had come to the show to honor his younger brother Miles who had been recently diagnosed with autism and Miles had been in the audience cheering for him. So it had come as a disappointment to many when Ben crashed out early as well, but he was merely one of the first that failed to complete the course. There had been others during the commercial break that didn’t stand out because they crashed or fell as well. And so hope was eventually put on Robin.

Robin was a young man that had wanted to prove/ show off to his father and he had also showed early promise what with racing through most of the obstacles with apparent ease. But unfortunately, Robin was no match for the Flying Squirrel. He too lost control and landed in the water before he could make it to the end. So he never got to show off to his dad that came all the way from the Czech Republic though there was always next year for him if he wanted to take the chance.

Tyler Yamauchi had crashed on one of the obstacles last year and had come back this year to prove himself. So Tyler turned his own story around and had had the audience cheering for him when he eventually became the first person to finish Stage 1 course. Therefore, it was possible to do it and that had spurred on the next crop of hopefuls. Meagan Martine had come back this year as well and she had failed several times previously, however, since her last defeat, she’s been training and she had desperately wanted to finish the course this year.

So Meagan showed what she’s been doing since last year and all the work she put in her training. However, her timing on the course could have been better. She got caught up on several courses that cut away at her time and so she had won a personal victory by conquering the Warped Wall, but she failed to finish the course in time and had suffered another defeat. Which is sad because she truly had put everything she had into this course and had come so close. There were several others that had gotten defeated by the time rather than the courses and it just seemed unfair.

The time was constantly running on every contestant and so they were fighting several things at once. They were running through courses and trying to get a time that would put them on top during the next Stage. But there were a few that did manage to finish the courses with a reasonable amount of time. Like Sean Bryan! Sean was a gymnast and has kept up his training all year long. So it wasn’t that surprising that he completed the course and many had hoped he wouldn’t be then last because there was once again several slip ups during the commercial break.

During the break, several contestants were wiped out on the Jumping Spider and Domino Pipes. So the “Godfather” making a reappearance was a great crowd booster. The “Godfather” whose real name was David Campbell has been on the show for every season of American Ninja Warrior and, sadly, he had never moved pass Stage 1. Yet, this year, David said was going to be different. He’s been working out on his own practice course at home and had even mentioned that he learned a lot from his past failures.

David said that everything he had gone through had only made him stronger and he went on to prove that by speeding through the obstacles like they were nothing until he eventually got to press the buzzer for the first time during his career. So, hell, persistence can win the day and many others tried to follow David’s example. The few contestants that have been on the show before and had given everything they had to the course this year was something to see. They were of course those that failed to complete the course, but David wasn’t the only one to create his own backyard course.

Tyler who happened to be a much younger contestant has dreamed of competing in American Ninja Warrior since he was fourteen and so he created a backyard course seven years ago that helped him hone his skills. But Tyler mentioned a recent storm that had destroyed his former course and so he lately he’s been training without it however, despite his misfortune, Tyler went on to become quite impressive. He raced through the courses and didn’t seem to slow down for anything. So Tyler completing Stage 1 had more or less been a childhood dream come true for him.

He had been training for the show for years now and being a super fan turned out to be quite helpful. Tyler joined over thirty others going to Stage 2 and his story wasn’t the only one to stand out. Adam after all had a young friend named Cole who happened to be autistic. So Adam let Cole join in on his training sessions once he saw how Cole opened up in the gym. Therefore, Adam dedicated his next run to Cole who had come out to Vegas to support him and he had later made the little boy as he once again won the course. And afterwards there was a bit of a winning streak.

Many that had come out had gone on to slip and surprisingly pull themselves up at the last minute. So there was a winning streak that made many dreams come true yet what had the audience on their feet at the end of the day was Jessie Graff. Jessie was a young woman that had always dream of joining the circus and shockingly she finally got her chance to do just that after winning American Ninja Warrior. The show had changed Jessie’s life and according to her family it had given her a confidence boost that allowed her to follow other dreams as well.

But Jessie had surprised everyone. She had been doing well on the obstacles and it had looked like she would finish the course this year until she had run into the very last roadblock. The rope wall could be difficult if someone didn’t get a tight enough grip and so it ended up ruining Jessie’s chances at becoming one of the few that managed to win the course more than once because her hand simply slipped. She had jumped and she had landed on the rope except then she had lost control and had dropped before anyone could blink.

So Jessie’s fall was disappointing because the audience had expected something more from her however Jessie hadn’t let the mistake get her down. She was all smiles again during her interview afterwards and she was willing to acknowledge where she went wrong. Meaning she knows what to do to get better for next time. Though the person that followed her was able to lift a few spirits. Najee was nicknamed “the Phoenix” and he knew how to fly through the course. He had stumbled a little here and there only he ultimately used the Flying Squirrel to give himself a high jumping off point. And that’s what helped him get to the buzzer and finish Stage 1 in time.

Then there was also Daniel. Daniel had managed to race through the course as well and had later completed the course with the fastest time so far. So the two men had gotten the audience excited again and had turned the whole course into some kind of joyous affair, but nothing grabbed everyone’s attention like Kacy! Kacy has been an inspiration to women everywhere and she’s what got more women to try out for American Ninja Warrior. So it was more than a little upsetting wen Kacy’s final run on the show ended in tragedy.

Kacy was retiring this year and she had wanted to make her last run count. But at the last minute, she lost her grip and ended her career with a defeat. So Kacy could have broken down during her interview yet she refused to do that. She told everyone how proud she was to have gotten that far and how she hoped many other women would go far in the competition. And, therefore, Kacy chose to end things with dignity and grace.

Kacy, though, was followed by Drew Drechsel and the fan favorite went on to prove how he became such a star by racing through the courses once again.

Drew may have been the last contestant to run Stage 1, but he finished the fastest time yet and had surpassed Daniel to get to the top. So now he just has to work against the forty other contestants that went into Stage 2 and hopefully he’ll make an excellent showing next week!