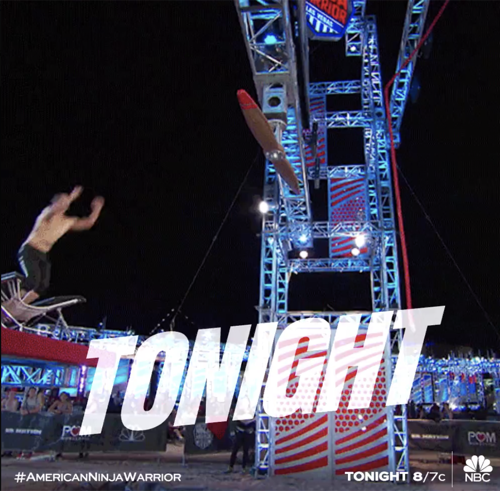 Tonight on NBC their obstacle course competition American Ninja Warrior returns with an all-new Monday, September 18, 2017, episode and we have your American Ninja Warrior recap below! On tonight’s “Las Vegas Season Finale,” season 9 episode 15 as per the NBC synopsis, “In the Season 9 finale, the season’s best Ninjas tackle the last stages of “Mount Midoriyama.””

A record of forty-one contestants got through Stage 1. However tonight was the incredibly difficult Stage 2. Stage 2 had six obstacles that the contestants needed to survive and, unfortunately, there was also a time crunch. The contestants had to finish Stage 2 within four minutes or they’d find themselves disqualified. So it’s safe to say that not many have survived Stage 2. There was just so many things up against the contestants that it was almost a miracle when or if they finished. And so Stage 1 was training wheels though Stage as it turns out was when those training wheels came off.

Though tonight top contenders, for surviving, have had the best of advantages. Some of them have already gone up against these obstacles before and were familiar with the fact that all of it was designed to throw them into the water. The obstacles – the Giant Ring Swing, the Criss Cross Salmon Ladder, the Wave Rider, the Swing Surfer, the Wingnut Alley, and Wall Flip – left little space for anyone to stand or maneuver yet the key to survival is momentum. The first guy that was up found himself in the water because he had lost some of that said momentum on the Swing Surfer.

The Swing Surfer had a ledge of about 1 foot and therefore the contestants had to quickly get on as well as quickly get off before thy landed in the water. Yet, Ian dropped, then Lance was forced to swim, and ultimately everyone found themselves before they could even get to the endurance test called the Wall Flip. The Wall Flip was the final obstacle and in the first thirty minutes of tonight’s episode there had been no one to make it that far. So what exactly were these obstacles doing to some of the strongest contenders – they were knocking them in the face and simply tripping them up.

There was a rookie who was the youngest contender in the competition and he had fallen on the Giant Ring Swing. That thing swung back and forth as the contenders were trying their best to move forward. So depending on the angle they try to get off – they more often than not landed in the water. Take Jamie Rahn for instance. He had been different. He had a condition that meant he shouldn’t have been so good at American Ninja Warrior except he had been the first to make it to the last part of the Wingnut Runner and everyone had thought he would also be the first to make that dismount at end. And so when he fell, it was just heartbreaking!

The green haired young man had made it the farthest however he had tried to jump off the obstacle while he was at a low ebb when he should have done it when he was up high. But during the commercial break, some others had gotten to the Wingnut as well and they too had fallen before they could complete the obstacle. So, coming back, all hopes were turned on the “Papal Ninja”. Sean Bryan literally had a bunch of brothers/monks cheering him and there must have been a prayer said in his name. And so god and his earthly representatives were there for Sean.

Sean was called the “Papal Ninja” for a reason because tonight he pulled off a modern miracle by getting to be the first person to complete Stage 2! By then, the crowd had doubted anyone would make it that far. So they and the commentators went wild when Sean finally pulled off what no one else could, but the pressure was on the next group to do just as good. There had been the tallest contestants and there had been fan favorite Adam Rayl. And they simply could not do the Wingnut themselves and had wiped out before long.

So hopes were high again when it was the Flying Phoenix’s turn. Najee Richardson was a gymnast who thoroughly trained all year round and has proven that he could fly higher than anyone else. However, Najee actually did better than expected. He flew through the Salmon Ladder and had treated the Wall Flip as if nothing it was nothing when it did in fact more than three hundred pounds all together. And so it wasn’t surprising when Najee won though he finished with the fastest time possible and had left everyone amazed in his wake.

Then after Najee, there had been one of the few men that managed to pass Stage 2 last year. Daniel Gil had eased his way through Stage 1 and was familiar with some of the obstacle courses. Though Daniel sadly fell during the Wingnuts which was the obstacle most couldn’t complete. So while Daniel’s fall had been a shock, it was at least understandable. The Wingnuts had knocked out so many that it took some time before anyone could complete again. The next man that did was Joe Moravsky.

Joe had said during his interview that he thought it was going to be harder than it was because of how many people had fallen on it. Yet, Joe was glad to have been proven wrong and he became the third man to finish the course. So with all the men getting there, there had also been a woman would complete Stage 2. Alyssa Beird was a fierce competitor and all eyes had been on her as the only woman, but the kind teacher that had the audience on their feet had also fallen on the Salmon Ladder. And so that had been disappointing.

Barely anyone was moving on to Stage 3 and fan agouties were getting knocked out of the game faster than anyone else. But Drew Drechsel had somehow gotten his fellow competitors to root for him and so everyone thought he would be the next to win. Not only was he fit yet he also slew through the first obstacles and was experiencing the best time out of everyone when he came to the Wingnut. Drew had threw himself so hard onto those things that he had seemingly banged his head more than once until he ultimately fell before he could reach the Wall Flip.

Drew later said that he had injured himself on the Wingnut and had hurt his arm which was what many in the audience thought had happen. So Drew was upset. He was smiling because he knew he would come back next year except he was also upset about throwing himself so hard that he risked himself. And therefore he has to get checked out afterwards to see if everything is alright, but he missed his chance at getting to Stage 3. Stage 3 came up before anyone could realize it and the first person up had been the Papal Ninja.

Though after Najee, there was Joe. Joe didn’t seem to have a problem with Stage 2 and therefore hopes were high that he wouldn’t find a problem on Stage 3. So the only thing that was against him was his record. Joe has wiped out on Stage 3 a few times in the past and so that could have psychology damaged his changes yet he surprised everyone when he was able to move pass the Ultimate Cliffhanger. Joe is one of the few that ever made it passed that and the surprises didn’t end there.

Joe the Weatherman had kept on moving and had almost gotten to the end when the Time Bomb took him out. So while that wraps up a dramatic final night, Joe did at least make it farther than he did last time and hopefully he’ll come back next year ready for whatever the obstacles throw at him!