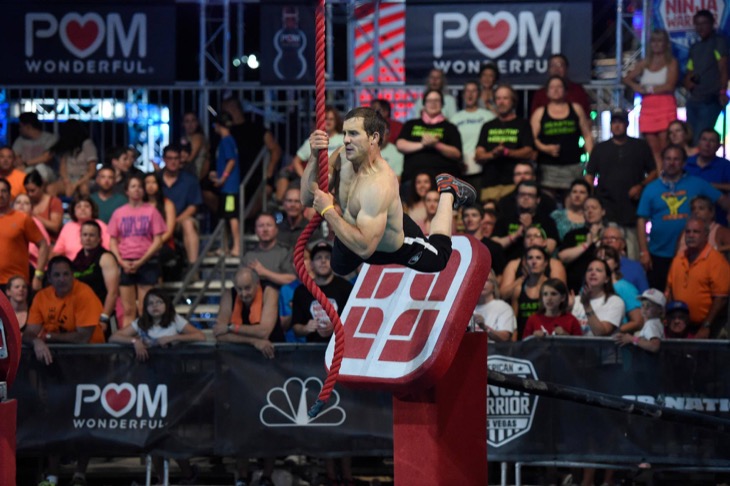 Tonight on NBC their obstacle course competition American Ninja Warrior returns with an all-new Monday, September 4, 2017, episode and we have your American Ninja Warrior recap below!  On tonight’s “Las Vegas Finals – Night,” season 9 episode 13 as per the NBC synopsis, “In Las Vegas, the season’s top competitors tackle a four-stage course modeled after the Mount Midoriyama course in Japan.”

Over the last twelve weeks, 100’s of athletic have pushed themselves to compete for $1,000,000 in the national finals. This is night one of the National finals and the show opens on the strip in Las Vegas, NV. Matt and Akbar welcome the fans and note that there are only 100 athletes left in the completion. Kristine introduces the eight obstacles that will be used tonight. In order to stay in the completion, they all must be completed within 2 minutes and 30 seconds. The obstacles are: Snake Run, the Propeller Bar, the Double Dipper, the Jumping Spider, the Parkour Run, the Warped Wall, the Domino Pipes, and the Flying Squirrel

Gabe Hurtado is a 32-year-old show salesman from Fresno, CA. Gabe is known for his trademark bandana and hopes to do better than his run at the finals last year. Unfortunately, Gabe can’t make it passed the second obstacle and is out of the race. Another familiar face to ANW is Karsten Williams. He is a 36-year-old personal trainer for McKinney, TX. This is his fourth appearance in the finals. Karsten makes it all the way to the Domino Pipes but then losing his footing and falls into the water.

Up next is Maggie Thorne. She is a 35-year-old mother of four and a Marketing Consultant from Lincoln, NE. She has had a tough year after going through a divorce but she feels stronger than ever. Maggi has a great start but she can’t make it over the double dipper and falls into the water. She is sad she won’t be moving on but has loved the experience. Chris DiGangi is the next competitor to take the stage. He is a 27-year-old Software Designer from Naperville, IL. He made it to the National Finals once before, three years ago. Chris attributes his success to his new girlfriend, Ninja Warrior Jesse LaBreck. Chris falls on the final obstacle. He just couldn’t get passed the Flying Squirrel but did make it further than any of the other competitors tonight.

While we were away two more athletes tried to conquer the course. Both Jesse Lucero and Matt Holt were unable to complete the course. Mechanical Engineer, Brian Wilczewski is the next on the stage. He is a 25-year-old from Hermosa Beach, CA. He has a rough start and is out on the first obstacle. Nick Hanson is a 29-year-old Coach from Unalakleet, AK. This is his second year in a row in Las Vegas. His family also traveled all the way from Alaska to cheer Nick on. Nick finishes the course with just 5 seconds left. He is the first to finish the course of the night.

Judas Licciardello is the next athlete to attempt the course. He is a 26-year-old auctioneer from Swedesboro, NJ. Judas made an amazing dismount from the Double Dipper but then can’t get his footing set on the Jumping Spider and lands in the water. Barclay Stockett is the second female of the night to attempt the course. She is 22-year-old gymnastics coach from Dayton, TX. She has an amazing showing but runs out of time with just one obstacle left to complete.

Earlier tonight Anthony DeFranco, Yancey Quezada, and Kapu Gaison all saw their dreams fade as they were unable to complete the course. While we were at commercial break three more athletics tried to tackle the course but failed. Lucas Gomes, Lindsay Eskildsen, and Michael Torres all could not finish the course. Forty-two-year-old Travis Rosen is a stock trader from Franklin, TN and one of the oldest competitors on the show. With 28 seconds to spar Travis finishes the course, only the second person of the night to do it. Three more rookies attempted the course and failed while we were at commercial. They are Jelani Allen, Luke Chambers, and Michael Johnson.

The next Ninja to take the stage is Josh Levin. He is a 23-year-old Rock Climber from Sunnyvale, CA who hopes to compete in the summer Olympics. Josh has an incredible showing and finishes the course with 16 seconds left on the clock. The crowd goes will at his finish. We return to night one of the finals and Kevin Carbone is the up next. He is a 22-year-old tennis instructor from Alpharetta, GA. Competing on the show tonight is a dream come true for Kevin but he can’t make it passed the Jumping Spider.

One of the strongest competitors of the night, it is Jesse Labbreck. She is a 27-year-old Ninja Coach from Naperville, IL. She has been a role model from several other female Ninja’s and really wants to finish the course tonight. Jesse makes it all the way to the cargo net but can’t get a grip and falls into the water. During the last commercial break three more athletes attempted the course. Spencer Johnson could not finish in time but both Ian Dory and Thomas Stillings finished and will be moving on.

JJ Woods is a 30-year-old stuntman from Miami, FL. After missing out in the finals last year he is even more determined to finish tonight. His dream comes true and he finishes the course with 16 seconds left on the clock. So far only six male athletes have completed the course.

During the last break, Sean Darling-Hammond finished with 6 seconds to spar. Drew Knapp also finished with just seconds to spar. Six-time ANW finalist Mike Bernardo had one of the strongest finishes of the night with over 20 seconds remaining on the clock when he hit the final buzzer. Kevin Bull almost feel into the water twice but was able to hit the final buzzer in time. All will move on in the competition.

Dan Yager is a 34-year-old salon owner from Fort Collins, CO. He has had an amazing year and while he was adopted he found his birth family after his first appearance on the show. The Double Dipper is too much for Dan and he falls into the water and is out of the competition. Fifth-grade teacher Allyzza Beird is 26 years old and from Marlborough, MA. She is determined to be the first female to complete the course tonight. She hits the buzzer with 8 seconds left on the clock and becomes the first woman of the night to complete the course. During the final break of the

During the final break of the night Ben Baker could not finish the competition Ben Baker but both Flip Rodriguez and Bret Steffensen finished with the best times of the night One of the all-time greats, Joe Maravsky is a 28-year-old meteorologist from Monroe, CT. He has the best showing of the night with over 40 seconds left on the clock when he hits the buzzer. His record might not last long as one of the fastest Ninja’s of the show is up next. Lorin Ball is a 30-year-old gym owner from Denver, CO. Fortunately for Joe, Lorin can’t get passed the Double Dipper and he is out of the race.

Lance Pekus is the final competitor of the night. Lance is a 30-year-old Rancher from Salmon, ID. He and his wife have had a very difficult year. She was diagnosed with MS many years ago with minimal symptoms until a year ago. Now she has to use a walker to get around. Lance wants to hit the final buzzer for her. The crowd starts to go wild as they realize how fast Lance is completing the course. He finishes with 45 seconds left on the clock. Lance has the best time of the night.