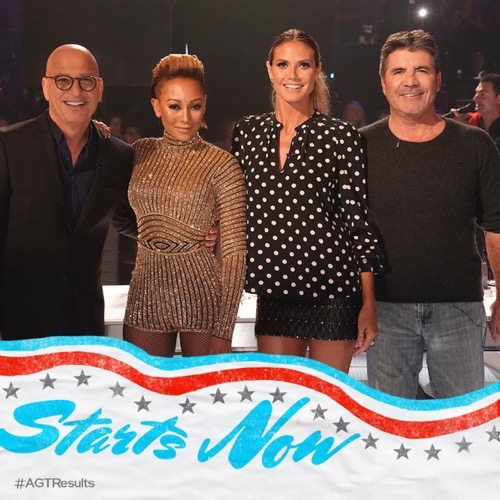 Tonight on NBC America’s Got Talent begins its new season with an all-new Tuesday, August 16, 2017, episode and we have your America’s Got Talent recap below!  On tonight’s AGT season 12 episode 11 as per the NBC synopsis, “Winning acts advance in a results installment. Scheduled: a surprise guest performance.”

America’s Got Talent results show starts with Tyra introducing the show and then clips from last night’s performances are shown. Twelve acts performed last night but tonight the competition will be over for five of them. At this point in the show the judges don’t even know the results. Heidi thinks it is so hard to pick the top acts. It was the best live show they have ever had. She also thinks Tyra did an amazing job last night.

Tyra announces that the following acts came in 6th, 7th, and 8th place and are in danger of going home. They are: Christian Guardian, Just Jerk and Yoli Mayor. One of these acts can be saved using the Dunkin Save. Viewers have the next 30 minutes to call in to save one of these acts right now. They can use the phone or mobile app right now. Howie is in shock that these three acts are being voted on right now and that only one can be saved. He thinks all three deserve to continue in the competition.

Tyra has all three acts back stage with her and was amazed at their live performances last night. She shows several clips of them having fun back stage last night. Nine acts remain on stage and Tyra announces that either Artyon & Paige or “In the Stairwell” will move on to the live semi-finals. She then says “In the Stairwell” will continue and Artyon & Paige are sent home.

Tyra calls The Singing Trump, Puddles the Clown and Preacher Lawson up to the front of the stage and announces that Preacher Lawson will be moving on to the live semi-finals. Both The Singing Trump and Puddles the Clown are sent home. Grace VanderWaal returns to the show to talk about what the last year has been like for her since winning last season’s show. She then sings. Grace will be going on tour and viewers are encouraged to attend.

A clip is shown of Howie dressed up like a woman checking contestants in to the competition. He plays several tricks on the contestants. Tyra is jealous of how good Howie looked as a woman. Darci Lynn and Angelica Hale are both called to the front of the stage. Tyra announces that America has voted them both on to the semi-finals. Angelica cries happy tears and Darci is thrilled. There two acts left and only one spot open. It is now between Bello Knock and Emily & Billy England. America has voted to keep Billy & Emily England and send Bello Knock home.

The winner of this year’s show will win one million dollars and a show in Las Vegas. The Dunkin Save vote is now closed and the act that has been saved is Christian Guardian. He thanks everyone for their support. The judges are now asked who they will pick. They have the power to save one more act. Will it be Just Jerk or Yoli Mayor. Heidi picks Yoli. Mel votes for Just Jerk. Simon thinks both acts have such potential but he picks Yoli. Howie can’t stand the pressure but decides to vote for Just Jerk. There is a tie. Tyra says she must now see who got the most votes from America. It was Yoli. She will be moving on to the next round of the show. The acts moving on to the live semi-finals are: Preacher Lawson, “In the Stairwell”, Darci Lynn, Angelica Hale, Emily & Billy England, Christian Guardian and Yoli Mayer.