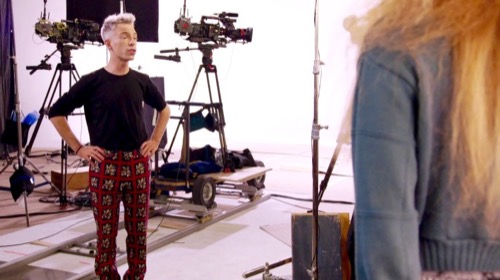 Tonight on VH1 America’s Next Top Model (ANTM) airs with an all-new time.  ANTM airs with an all new Monday, February 22, 2017, cycle 23 episode 12 called, “And Action!” and we have your weekly American’s Next Top Model recap below.  On tonight’s ANTM episode as per the VH1 synopsis, “Drew ups the intensity of the photoshoots. The final five are challenged to shoot a beauty video unleashing their inner crazy.”

America’s Next Top Model begins with the models coming home from panel. Cody says her sister got eliminated but that just shows she has been modeling a lot longer. Tatiana says Cody is more herself now that her sister is gone.

CoryAnne gets a letter from her dad, with photos of them when she was younger. She reveals that it took a long time but her mom was a supermodel and kind of got lost in it, only seeing her once a year or every other year; she recently cleaned up her act and actually lives with CoryAnne now. She says her mom is definitely an inspiration to her.

A RitAlert comes in and the message is, “A top model needs to be more than just a pretty face, you need to play the part. Good luck!”

The following morning the models are taken to Queens Theatre, where they meet Rita Ora who says today they will be focusing on a part of their career she is very excited about: ACTING! She tells them even if they don’t want to follow acting as part of their career, this is important for them to get in touch with their emotions.

Rita introduces legendary acting coach Susan Batson, who has worked with Nicole Kidman, Kerry Washington and Naomi Campbell, to name a few. Susan says the acting they are going to do is about a memory of a personal big loss. Rita is giving them a scene to act out with Adrienne C. Moore from Orange is the New Black; they have 30-minutes to memorize their lines.

Tatiana gave up her feelings to make sure she knew her lines. She knows she bombed it and Rita says it was bad. India overacted the scene and Rita wasn’t too impressed. Cody can’t even cry, saying she is the one holding herself back.

Courtney came on stage full and she performed amazing. Rita says that was an incredible example of someone bringing their real life into the scene. They all agree they really felt it. CoryAnne was able to get deep and pull out the truth. The winner of the challenge is Courtney, her third win in a row; she is offered a consultation with Susan Batson about acting jobs.

On the ride back, Courtney taunts the girls about winning 3 times in a row. Everyone but India says she just wants people to hate her. India can’t understand why the girls have to be so cruel to Courtney when she did such an amazing job.

The next day, as India is complaining about always doing the dishes, they receive another RitAlert. She says, “It’s been said that beauty is in the eye of the beholder. Show me your crazy!”

The final five are beginning to really focus on winning; Cody alienates herself from the rest of the models, ready to win.

They arrive and are greeted by Drew Elliott, who said yesterday they did emoting with words, through acting and today they are going to do it without words, since modeling is like silent acting.

Today, they are going to shoot a short beauty video where they need to let their inner crazy run wild. Their task is to go from top model to model gone mad; shot by 3 cameras and only one take to do it in. He sends them off to hair and make up.

Courtney is up first, Drew says she looks beautiful. He says she is doing a great job Cody is not listening to Drew at all, saying she destroyed the video; but its a very interesting look at the end.

India is up, she feels confident but overwhelmed. She is doing a good job until her wig gets stuck in her hair and the makeup didn’t smear properly; she is scared about being in the bottom at this point of the competition.

Tatiana is up, Drew tells her to go big or go home. He says its easier to bring someone down rather than bringing them up. She can’t act and doesn’t know how to do any better. She tried her hardest but admits it wasn’t her best.

CoryAnne literally rubbed her makeup all over her teeth, and Drew admits her piece became horror movie but not fashion horror. Drew says she turned a bit Stephen King’s Carrie on him.

Before panel, some of the models are emotional from the shoot and scenes; admitting they are nervous for panel. India feels weird and is worried about herself heading home.

At panel are judges Ashley Graham, Law Roach, Drew Elliott and host Rita Ora. India is first up. Rita loves that she is a comedienne. Ashley tells her she is doing exactly what a model needs to do. Drew says they are only getting 70% of her, they need more.

Cody steps up and before they review her piece, Law Roach says her outfit is driving him nuts, from her head to her waist she is super model and from her waist to her feet she is supermarket. He tells her that her show choices since the beginning of the season have been awful and he has been holding it in, but couldn’t help it tonight. He’d rather see her walk up barefoot like Naomi. He says all the judges were thinking it.

None of them were impressed because she put her eye makeup all over her face; Ashley is shocked she did it after Drew told them all not to do that. Ashley says her final product is the only thing that saved the piece. Law says at this point she shouldn’t be making mistakes like that and she needed to listen!

Courtney is told by Law that she overacted in it, her final image made her look too old. He says this is the first week, he isn’t happy with her work. Drew said he loved that she went to the wild side instead of the crazy side. Rita loves that she can adapt into other characters.

CoryAnne is up and Drew says he is not a fan of this piece; saying he had to constantly tell her this was still a beauty video. He watched as she took it to a place it shouldn’t have been; he wanted it to be gorgeous and this is the first time he can say he didn’t think she was beautiful.

Law Roach loved the photo saying the final image made her look very European hooker; Gorgeous. Ashley feels she has the advantage because of her mother and how she was raised but something is still missing. She shares her emotional journey with her mother; Rita gets up and holds her saying this story is crazy, and she this story is going to make or break her; everyone has a story and this is hers.

Tatiana is up last, Law says he liked the acting and the poses but he didn’t find her pretty. He says at panel she always kills it, but he is starting to question if she has the face that will sell anything. Ashley agrees and says she doesn’t understand editorial yet; she doesn’t want to see her get kicked out of the competition because she can’t do the weird editorial stuff.

Tatiana says that she didn’t like the makeup and sad that; Drew shuts her down saying she never told him anything, but this show isn’t about what is right for Tatiana. This competition is to give them incredible lessons from legends in the industry to make them top models because right now she is not.

The judges deliberate and tonight they will be down to the final 4. Rita tells them from here on out, they are expected to put their best face forward. The winner for best video of the week is India. Courtney and CoryAnne are both safe.

Cody, winning best photo last week, you raised the bar for yourself. What the judges need to see from you is consistency. You should be taking in everything we say, but your ups and downs tell us you might be lost. ~ Rita Ora

Tatiana, for weeks we sang your praises, convinced you were the model to beat, but when pushed beyond your comfort zone, you seem to fall apart. A boss always delivers. ~ Rita Ora

Tatiana makes it another week and another chance of being America’s Next Top Model. Cody and Rita hug and Rita tells her she is the one who has transformed the most. Cody removes her shoes and hands them to Law Roach telling him to do whatever he wants with them. She feels coming this far in the competition is a huge feat and she is very proud, feeling she gave her all. END