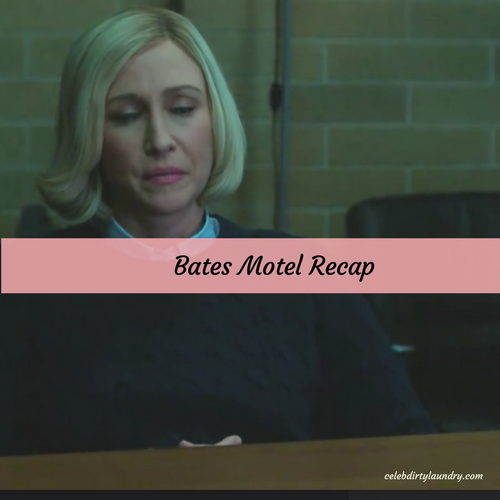 Bates Motel airs tonight on A&E with an all new Monday, April 17, season 5 episode 9 called “Visiting Hours” and we have your weekly Bates Motel recap below. On tonight’s season, 5 episode 9 as per the A&E synopsis, “Norman’s (Freddie Highmore) legal problems worsen; Emma tends to family business as Dylan gets caught between his past and his future; and Romero enacts his plan for revenge.”

Unfortunately, Norman’s other personality decided to take over while they were in jail. The otherside had said that they needed to protect Norman however the things that “mother” did were all coming out. Norman’s brother Dylan had found out Emma’s mother had been found on the land and there had been no doubt in his mind that his brother did it. But telling Emma had been the hard part. He had wanted her around her because he needed someone to hold him during everything and she wasn’t sure she could do that. Emma couldn’t be there for him knowing that her mother was dead and that Norman was much worse off than anyone realized.

So the only one that didn’t think Norman was a murderer was Norman. His otherside had somehow convinced him that they had to everything that they did and so Norman had tried to bluff his way through his first appointment with his lawyer. However, Julia later told him that the only way they could get him off the charges were to plead to insanity. She said that he had a history of multiple personalities and that there were records to back it up seeing as he spent time in a mental institution yet “mother” had been very clear when she said that Norman wasn’t crazy and that he had all been locked up because his stepfather had manipulated his mother.

Yet, Julia didn’t believe Norman should fight against the charges seeing as there was ample evidence against him and the sheriff department were continuing to find more. So she tried to get Norman to see reason and, when he refused to, she went to Dylan. Dylan was the only one that count testify about his brother and how Norman wasn’t usually a danger to himself or anyone if he received proper treatment though Dylan wasn’t sure that he should. He had been going over everything with Emma and he had seen the way his wife had looked at him when he agreed to talk to Julia. And so Dylan was on the fence about his brother until Julia told him the cold truth.

Julia said that Norman was being tried for a capital crime and that he could be executed if he was found guilty. So Julia told Dylan that whether he liked it or not he was still Norman’s big brother and he couldn’t let the courts kill Norman when they both know that Norman needs treatment, but it was far Dylan to choose between Norman and Emma. Emma had just been in pain since learning the truth. She had had to plan her mother’s cremation and what to do with the ashes. And therefore she didn’t care about what would happen to Norman because she believed he brought everything onto himself.

Except Dylan knew that wasn’t the truth. He knew that his brother needed help and he’s now that for a while now. So sitting in on the hearing had been tough for Dylan. He had forced himself to listen to all the details about what Norman did and had ultimately ran out of there because it had been too much on him. But later he had been confronted by one of the victims of what Norman did and she had said that Norman was able to fool for her for a few weeks before she realized that something was off about him so she didn’t believe that Norman could have fooled his own brother for most of their lives. And in a way she had been right.

Norman hadn’t fooled Dylan and so Dylan had known that Norman was sick before he left him alone with just their mother to look after him. However, Dylan was so busy wallowing in his own guilt that he didn’t realize Emma was escaping from the problem. She had handled her mother’s last resting place and she had even gone to see Norma’s grave. So Emma felt that she didn’t need to stick around and she was going to go back home to her daughter yet before she left she had paid Norman a visit. She had wanted to speak to him and had found herself speaking to the other personality. And so Emma had asked “mother” to tell Norman that she misses him.

Yet, elsewhere, Romero had found out about Norman’s arrest through the newspaper and so he decided to finally get his revenge though Romero believed that killing Norman was the only one that he could get justice for Norma. So Romero later went against everything he once stood for. He had pulled a gun on Regina and had used her as a hostage to overtake the sheriff’s department. And then he had demanded to be shown to Norman’s cell so he had the deputies help him force Norman out into the open and he could have killed Norman right there and then. Only something stopped him and he chose instead to take Norman hostage as well.

So Romero forced Norman and Regina into the car and he told Norman that he was going to take him to her body!