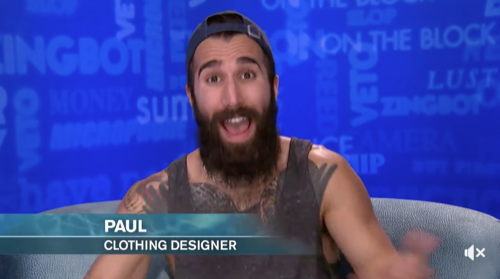 Tonight on CBS Big Brother 19 returns with an all-new Sunday, July 27, 2017, episode and we have your Big Brother 19 recap below! On tonight’s Big Brother season 19 episode 15 “Another houseguest is evicted from the compound. The remaining players compete to become the next Head of Household.”

Big Brother Season 19 (BB19) continues tonight right after Jessica adjourned the Week 4 Power of Veto ceremony with her deciding to keep her original nominations of Josh and Ramses on the block. Jessica has had the most successful weeks on BB19, first she was tempted by America for the Halting Hex, then Cody won his way back into the house after winning the Battle Back competition, then she won Head of Household (HoH) and last night, she went on to win the golden Power of Veto (PoV).

Paul is confident that Josh will be safe and Ramses will go home; Josh feels Jessica made a rookie mistake by not using the power of veto to save Ramses and thoroughly looks forward to her being blindsided for listening to Cody instead of her gut. In the room, Josh hugs Paul, who tells him not to get too happy and Josh decides it time for him to keep putting on his act and walk around the house all mopey.

He cries in the kitchen and Elena comforts him. Josh admits he is either going to go completely crazy or win an Emmy for this performance; its important for him to do so, because everyone is fairly certain Mark and Elena aligned themselves with Cody and Jess again. Kevin talks to Jason and decides he isn’t going to rock the boat and will stick to the plan for now. He likes Ramses and says he will see him for Thanksgiving.

In a private room, Josh is doing the “meatball” dance, he suddenly hears people outside and quickly lays down and acts very sad. Mark assures Jessica that they are completely locked in and he feels no one would want to keep Josh in the house’ Paul doesn’t like that Mark and Elena are so chummy with Jess and Cody and that is why he didn’t tell them about the plan and hopes they are as blindsided as their pals on eviction night.

Mark tells Cody they need to read the group and see who they can work with and who they can’t. He says he hasn’t spoken to anyone since Cody returned and after evictions this week, lines will definitely be drawn within the house. Cody is pretending to work with Mark but doesn’t trust him as he had no problem backstabbing him before.

Outside as Mark and Paul play pool, he admits to Paul that he likes Cody and is glad they have a clean slate; Paul is simply absorbing the information. Mark says he doesn’t like the way a couple people are playing the game, implying its Matt and Raven. Paul thanks him for the grocery list of red flags and will play pool with him any time. Paul immediately reveals to Matt and Raven what Mark said to him about a pair who are staying neutral and that its pissing him off. Raven says it just sealed the deal and she doesn’t trust him at all.

Cody talks to Ramses who says he talked to everyone and although some people are sketchy and feels some want to keep Josh just to mess with Cody and Jessica. Cody says if that happens, he won’t be able to trust anybody. He dreams of seeing Josh leaving the house and hearing all the boos. He doesn’t care about the money, that is all he wants.

Kevin talks to Jessica outside, asking how she is doing. She admits she won the temptation too and it is better than what Paul won and Cody and her can’t go anywhere for the next 4 weeks; he says he won’t say anything. Kevin feels him and Jessica have a decent relationship and once they are back in the house, Kevin feels Jessica shouldn’t be blind sided; he goes into the toilet with her and tells her they house is planning to flip on her and Ramses is going home.

Jessica is frustrated that she didn’t trust her gut and tells Cody what Kevin said to her. She is furious and assumes its Paul who is rallying all the others in the house and there is a very good chance Ramses is going home. She only trusts Cody’s and Elena’s votes and not even sure of Mark. She needs to lock in the numbers in the vote and says her and Cody really need to campaign the house right now.

Julie announces its now time for the live eviction as it is up in the air about who will be going home tonight. Ramses says his time there has been super fun and really doesn’t want it to end, he honestly feels this position sucks and doesn’t feel he deserves to be there; he hopes they vote to keep him because he thinks he can truly help a lot of the people here. There is a jury coming and they have to think about who they can live with and who is going to help them especially when they are in the position he is in.

Josh stands and sends all the glory to God for this blessing. He loves his family and all of this is for them, his house mates are a majority of these guys besides the two meatballs he couldn’t care less about. He tells the rest they are part of his familia and he would go to bat for them. He tells Julie it’s been real and sits back down. Everyone but the two nominees are not allowed to vote and Jessica can only vote on the event of a tie.

The votes are in and with a vote of 7-3, Ramses is given a chance to say goodbye, gather his things and leave the Big Brother house. Josh takes a few deep breaths at the chair while everyone else gives Ramses hugs and wishes him well. The house guests watch as Ramses’ picture goes back.

Outside Ramses talks to Julie, he knew he was the pawn but he knew he was going home. He gives props to Paul, but knew it was him who rallied the house to evict Ramses. Ramses admits he tried to campaign for himself but felt people already had good links in the game and wouldn’t change their mind. He was friends with everyone in the house but had no alliance, so his plan didn’t really work once Jillian was evicted. He says although he is a Big Brother super fan, it was much harder being in the actual game.

Jessica apologizes him in a video message and Josh says he chose to be with the meatballs and that cost him his game. He thinks he is a great kid and hopes they can be friends outside the BB19 house. Paul says he was a super funny kid and he enjoyed his company but strategically he was better than Josh and had to go sooner than later. Kevin apologizes and tells him not to take it personally just like he taught him that he has to play the game. He says he will see him at the end and knows he is coming for Thanksgiving; he misses him and tells him to say hi to all his friends – Ramses cries from Kevin’s words.

Elena walks by and the pictures of all the house guests changes into “Inked and Evicted”; everyone is called out and see the evictees in different pictures with several tattoos. Josh knows this is a competition that they need to know the ink on their body.

In the backyard, things are getting started. Jessica is not eligible to compete, the name of the game is “Inked and Evicted”; last night they all studied pictures of Cameron, Jillian and Dominique; Julie will now ask them a series of true or false questions based on those photos, if they get it right, they stay in the game; if they get it wrong they are eliminated. The last house guest standing will be the new Head of Household (HoH).

Elena is out in the first round. Mark, Alex, Cody, Kevin, Josh are out in round 2. Everyone got round 3 and 4 right. Christmas and Jason are out in round 5 and we are down to Matt, Paul and Raven. Round 6, Paul becomes head of household beating out Raven and Matt, making him the Head of Household (HoH) of Week 5.

Julie doesn’t tell the houseguests that the consequence Jessica placed on the house by accepting the temptation is called the Temptation Competition and for the next 3 weeks, before nominations the houseguests will be tempted to participate in this challenge and for the first time in Big Brother history the house guest will get to choose whether they want to compete or not. The winner of this competition will be safe for the rest of the week, but like all temptations, participating comes with a consequence and the house guest who finishes last will automatically go on the block as a third nominee.

Tune in Sunday, July 30, when the Temptation Competition will be revealed to the house guests and watch it all play out, plus who will HoH Paul nominate for eviction?