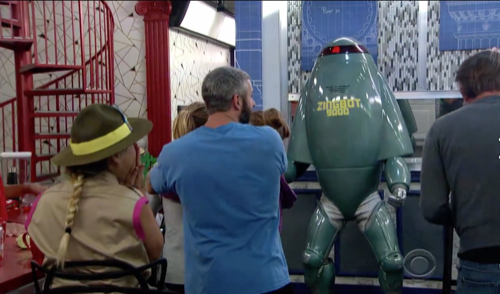 Tonight’s episode opens up with the Houseguests just ending the nomination ceremony.  Christmas is happy with her nominations.  She figures that if Mark wins the PoV then she can break up a power couple.

Paul is not impressed that Mark used his “save a friend” on him.  Mark is still his target this week.

Kevin takes Jason around and tells him that he has nothing to worry about Mark is the target.  Jason is pretty confident.

Paul goes to Christmas’ HoH room and tells her the main goal is to get Mark out.  Josh asks Paul what he is thinking for the top 5.  Paul asks Josh if they want a pair or Kevin.  Josh wants Kevin to stay.

Kevin talks in the Diary Room that he has made side deals with several people.  Paul thinks if he can go the finally with Josh, Christmas, Raven & Kevin he has a good chance of winning competitions.

Mark goes to the Diary Room he is upset he understands it is a game.  He wants to win the PoV and stay off the block he is feeling very lonely.

Jason is really nervous.  He cannot figure out why Christmas picked Raven instead of Alex. Christmas says she had a brain fart.

Mark goes to see Paul and tells him he feels emotionally drained.  He knows this is what Big Brother is about back against the wall.  Mark really wants to win PoV he realizes he wins or he goes home.

Zingbot Comes To The House

Zingbot heads into the house screaming I’m back!  What’s up loser Zingbot is here….  Everyone starts to bow to Zingbot and Kevin cannot figure it out he is not going to bow he bows to NO robot!

Paul is also confused why everyone is so excited because they are about to get zinged.  Josh is enjoying it more than anyone.  Zingbot calls out to Alex and says, “I see you like to carry around a ton of dead weight or how I like to call it Jason.” Zing Zing

Zingbot looks at Raven and says, “Poor Raven you got the clownatard.  This is the worst punishment ever.” Everyone looks confused because Raven is in her regular clothes. Then Zingbot says, “Oh wait that is just your face.” Zing

Hey Josh, “You shed so many tears this season too bad you can’t shed any weight.”

It is time for the Veto Competition.  The backyard is decorated in planets and stars.  The Houseguests have to help Zingbot.  Christmas will not be able to compete because the Doctors have not cleared her.

Zingbot ran away with the President Election.  Zingbot needs to get home to defend himself because they are saying he fixed the election.

Each Houseguest will on go use a funnel to get some oil then head down their lane (which is super slippery) to fill their tank.  The first player to fill the tank wins PoV.

Paul & Matt are in the lead.  All the players keep slipping and falling.  Mark realizes this is not his competition.  It is a 3-way race between Paul, Matt & Jason.

Jason is tired of wearing the helmut on his head.  He says he is 38 and balding and he does not want it anymore.  A voice sounds out that says, “Good job Jason, your punishment is over.”

The voice then says, “Alex you have been a great camp guide.  Your punishment is over.”  Alex is thrilled.

Mark tries to convince Christmas that he needs her in the game.  Christmas tells him there are changes each day so you never know.  Mark tells Josh and Chrismas they could make big moves.  Mark explain to them that Alex and Jason are winning, everyone loves them.  Mark suggests they should send Alex home.  Mark thanks them for hearing him out.  Alex understands what Mark said. Christmas tells Josh that getting Alex sent home sooner was a good idea.

Jason decides to take himself off the block.  Christmas has to nominate a new person and she chooses Mark.

Come back to Celeb Dirty Laundry tomorrow and see who gets evicted from the Big Brother House Matt or Mark!