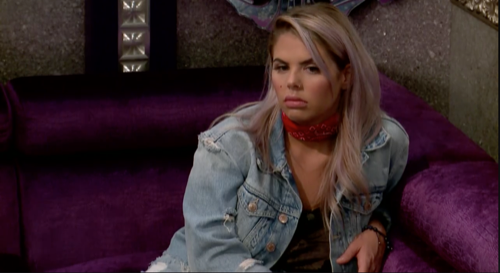 Big Brother Season 19 (BB19) continues on Day 45, when Josh adjourns the nomination ceremony. Everyone in the house thinks he is targeting Jess, but no one knows he is gunning for Elena. He feels she is too shady and disloyal to keep in the house. Cody hugs Elena, who doesn’t feel safe at all because if Jess wins the Power of Veto (PoV) then either her or Mark are going home. Mark is a bit worried and hopes he wins the PoV to completely ensure his safety.

Josh is about to talk to Raven, Matt and Paul when Elena interrupts them. He begins to talk about Cody and making sure he doesn’t get into his face but as soon as Elena walks out, he tells them he wants her gone, but all three say not before Jessica. Josh goes to the bathroom to hint to Jess that she isn’t his target this week but Cody starts with him. Jess tells him to stay consistent and pick a mood.

He tells them they are playing a game, she tells him to spit it out; she is very disrespectful. He says that Cody is ruining her game and Cody says he doesn’t want to hear his opinion and feels Jess shouldn’t have to take him bashing her boyfriend. Kevin comes into the bathroom as Josh tells her this isn’t personal and tells Jess she still can save herself with Veto.

Cody says he doesn’t want to hear that him and Jess are two different people. Jessica says she is okay with the game and they can keep throwing speeches at her. Josh tells her when she calms down she can come talk to him. She feels Josh is an idiot and she’d rather shave her head that continue talking to Josh; Kevin leaves with Josh.

Paul talks to Christmas about her temptation, where she can switch out with anyone other than the nominees and HoH in a PoV competition; Paul says its the perfect time to use it as he doesn’t want her to hold onto it and down the line she uses it when its not to his benefit, she says she will think about it.

Christmas reveals to Josh what her temptation was, in hopes that it would be a trusted move and help them collaborate on what to do next. She tells him that Paul is the only other one who knows and explains what Paul wants her to do but she says she will support Josh in whatever he wants to do.

Meanwhile, Jessica says she has a bad feeling about the PoV competition but Cody says she will knock it out of the park. She’s praying that Cody’s name is one of the two that will be picked for the competition as he is the only one she trusts.

Josh tells Christmas he doesn’t want the temptation used; she agrees that it makes sense to use it later. He reminds her that Elena is his target, he wants her out more than Jess and Christmas uses her temptation doesn’t seem logical at this point. They both return to the HoH room and tell Paul they don’t want to use it. Paul, again, says that Jess is the priority.

Paul is upset because if the house guests remember, when Jess was a lone she was lost and when Cody was alone he couldn’t do anything but as a power couple they steam roll everyone. He tries to convince them that Jessica is a more powerful player and bigger threat, and he doesn’t want them both in the jury; Christmas and Josh secretly disagree.

Josh, Jessica, Elena and Mark stand together as Josh picks the two remaining players for the Veto competition. Josh pulls Mark’s name first and he chooses Alex and the second name is Cody, the cue was for Josh to blink if he wanted Christmas to use her temptation and he blinks. Paul smiles as Christmas stands up and the Den of Temptation appears on the TV. Christmas reveals the Ring of Replacement and that she can replace anyone form the random draw; she chooses to replace Cody. Josh says BB will inform them when the competition is ready.

Cody and Jessica retreat to a private room where they hold each other and cry. Jessica says its not over and he tells her she has to win. He covers his face with his hat, he says it breaks his heart that he can’t be there for her and its crushing him how this is playing out. She reminds him its them against the house.

Christmas tries to talk to Jessica, she tells her it isn’t personal but Jessica says its very personal that Christmas would use her “gift” to get her out of the game. Privately Christmas says its a tad personal because Cody put her on the block at the beginning and now she is taking his power away so he can’t save Jessica. Jess says Christmas is stabbing her in the back and can go to hell and Christmas rides away on her scooter when Jess says she doesn’t have relationships with people who are two-faced.

Jessica tells Cody what happened and feels that Christmas probably can’t compete so its her against Elena, Alex, Mark, and Josh. She says if she wins Veto, the house is going to have a huge problem on its hands as she is a very sore winner.

The houseguests (HG) enter the backyard where Kevin is the host; its the OTEV game and he announces that Christmas has not been medically cleared to compete and must sit out. The pig asks the players if they can come join him so he can find his family.

When they kneel above him he says he isn’t feeling well and turns into an evil monster. He begins to spew green slime on all of them. OTEV explains they are his servants, he needs souls and they will harvest them for him or be banished to veto hell. Each round he will give them a command, the answer will always be a number, they need to search for the correct number of souls and bring them to him. He warns that in each round he will be taking a soul from one of them, if everyone brings the correct number then he will take the soul from the last to return; this will continue until one servant remains and will be crowned as his eternal servant and win the golden power of veto.

In the final round, Mark runs back to the stock pile he made earlier but Alex beats him to the top but dropped her soul fighting Mark to get to the top. She finds it at the bottom in the pond and worries her chance to win went with it. Mark gets it right and after Alex is eliminated, Mark wins the power of Veto. Josh is frustrated that he has to come up with another nominee and Mark is worried about Elena being on the block; Jessica feels her game is over.

Jessica cries as Cody holds her, he tells her to not give up. She doesn’t want Cody to be sad nor upset and she looks forward to their time together outside of the house. He tells her he is going to be angry and rip through the BB house. He says everything between him and Jess isn’t just a game to him and promises to try to get rid of Paul; she says she believes in him.

Josh talks to Matt and Raven, and Matt is willing to go up as a pawn since this is probably the safest week to do it; Raven feels the same way and tells Josh it doesn’t matter which one he chooses as there will be no repercussions for doing it. The Veto meeting is called.

Mark says he has the power to veto one of the nominees. He jokes that Josh put him up as a meatball but he is more of s dessert guy and calls himself a “cannoli” and is using the power of veto on himself. He tells Josh he needs to name a replacement nominee. Josh says his replacement has agreed and knows the plan and places Raven up on the block next to Elena and Jessica. Mark adjourns the Veto meeting.