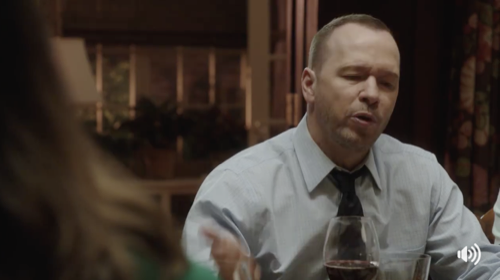 Tonight on CBS their hit drama starring Tom Selleck Blue Bloods airs with an all-new Friday, October 13, 2017, episode and we have your Blue Bloods recap below. On tonight’s Blue Blood Season 8 episode 3, as per the CBS synopsis, “Erin’s trial against a notorious human trafficker is jeopardized when the presiding judge is mysteriously found dead. Danny and Baez are put on the case to investigate foul play. Meanwhile, Mayor Dutton opposes Frank’s public safety initiative, but City Council Speaker Regina Thomas devises a plan to help Frank bypass the mayor’s veto.”

Erin’s latest case had become dangerous before she knew it on tonight’s episode of “Blue Bloods” and the only person she could turn to was her brother, Danny.

Erin had been working on a case against Chao Lin. Chao Lin was a female mob boss that has killed, maimed, and trafficked individuals for years however she made one mistake. She had recorded a moment when she ordered a man to lose his hand for not respecting her and so that had given Erin everything she needed to put Chao Lin away. But the woman wasn’t going down without a fight. She had her lawyer do everything he could to stop that video from airing in court and she had even threatened Erin.

However, Erin wouldn’t back down and neither did the judge. The judge on the case had thought the video was admissible and told Erin she could use during the trial. So that same judge was later found dead after someone through him off a rooftop. Erin, though, knew it was Chao and had asked her brother to investigate the judge’s murder. Danny was the only one Erin trusted enough to find a link between the judge’s murder and Chao. Chao shouldn’t be allowed to get away with murdering a sitting judge.

So Danny said he would work the case. He just didn’t want to work the case with Anthony. Anthony drove Danny crazy and so he just wanted to work his case with his partner. Baez knew how he worked and how to handle him, but the duo hadn’t been able to get rid of Anthony and so they had been stuck with him as well as his questions. Anthony had wanted to find a connection between the judge’s death and Chao while Danny and Baez had merely wanted answers. They had gone back to the building and had come up with another theory that didn’t involve Chao.

The judge had apparently been fighting with his wife for a long time and they screamed so loud at each other that it turned out to be the only thing his neighbors remembered about him. But Anthony didn’t want to see other possible leads like the judge being depressed and having a wife that seemingly hated him. So Anthony and Danny had eventually been forced to separate before they got into a fight. Baez hadn’t wanted to discount what Danny found and she had asked Anthony to be aware of everything Danny has been going through since Linda.

Danny hasn’t been the same since he lost his wife and so Baez has been stepping around some of his feelings. Yet, Anthony said that Danny had always been an ass. So Anthony didn’t go with Danny and Baez when they went to question Chao. Chao had been her usual smug self however the detectives didn’t know if she was hopeful about a new judge or if she had killed the last one. And they still didn’t know the answer to that after talking to her. Chao denied any part in what happened to the judge and had said the judge killed himself because was depressed and everyone knew it.

Her lawyer had also used that in the new judge’s chambers because he believed they should move on from the investigation into the death. He said that judge was depressed and had used the fact that the victim had been on antidepressants to say the judge must have killed himself. But he was wrong when he pulled that particular card. The new judge was also on antidepressants and she refused to allow anyone much less Chao’s lawyer to disparage her late friend. So the detectives still had time to investigate though they found something to disprove Erin’s theory.

Erin thought Chao paid someone to kill the judge. Though Danny and Baez found out the superintendent in the building had lied to them. He said that he had been in the basement on the night the judge died and it turns out a witness had seen him on the roof with the judge. So the detectives brought in Wheeler and they pushed him until he admitted he killed the judge. The judge had lent him some money and Wheeler had needed more time to pay it back because there had been a couple emergencies. And according to Wheeler, one thing led to another.

Wheeler said he hadn’t meant to kill anyone and that he guessed he pushed the judge off the roof. However, there was something strange about the night Wheeler confessed. Someone had followed Erin and had left behind a calling card so that she knew it was Chao threatening her. So Erin hid that from everyone and it wasn’t until she was apologizing to Danny for pushing him that she revealed what happened. She told her brother that Chao had threatened her and that she didn’t tell her office because she didn’t want to be removed from the case. And he had asked when she was threatened?

Danny thought it was odd that Chao would threaten Erin on the same night Wheeler confessed to the judge’s murder because Chao would have known that Wheeler had been brought in. But both Danny and Erin thought she would make that threat if she didn’t know what Wheeler was telling the cops. So Danny brought Wheeler in talk and he made Wheeler reveal that if he said anything against anyone that his family would be in danger. And so Danny found out that Chao had been behind it all.
Danny knew he wouldn’t been able to put Chao away guaranteeing he could protect Wheeler’s family and so he worked with Anthony. Anthony and Wheeler went to make a deal with Chao’s people and somehow they had gotten Wheeler everything he needed to talk. Yet, Erin was removed from the case. The incident with her and Chao’s people had gotten reported to her boss and so there was going to be a new ADA as well as judge on Chao’s case. So Erin had thought her brother told on her when it had actually been Anthony.

Anthony gotten her removed for her own good and Danny agreed with him. Though they did arrest Chao’s second-in-command for the threatening Erin because he was stupidly seen on security footage. So that entire organization was chipping away and, despite not getting a first row seat, Erin knew that Chao wouldn’t get away with murder.

But while Frank didn’t discuss his problems at the dinner table, he managed to stay true to himself without stepping on the mayor or anyone else. So he quietly handled a political problem without it becoming some huge thing with either the press or his family. And now no one needs to ever know!