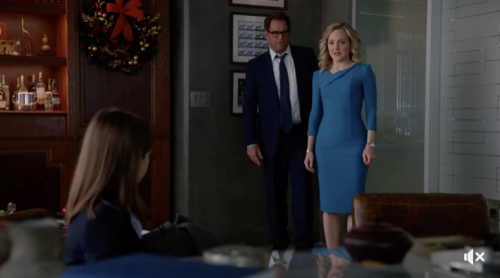 Tonight on CBS their  drama Bull inspired by Dr. Phil McGraw airs with an all-new December 12, 2017, episode and we have your Bull recap below.  On tonight’s Bull season 2 episode 10 as per the CBS synopsis, “As Christmas approaches, Bull is amused when he meets a 9-year-old girl who wants to hire him to help her divorce her parents, but he’s shocked when a judge appoints him her temporary guardian. Also, Marissa discovers disturbing information about her boyfriend, Kyle.”

A little girl attempts to board a plane by herself. When she is asked where her parents are she tells them they are on the plane. Security stops her and pulls her into a waiting room. Her nanny arrives. She is upset that the little girl took off by herself.

Bull introduces their latest case, defending a cell phone company. It needs to be wrapped up by Christmas in 5 days. He wants the entire jury pool vetted by the end of the day. He goes to his office and finds a little girl in there. He is shaken. She is there to get a divorce from her parents. He corrects her. She wants to be emancipated. He tells her she needs to be 16. She lies and says she is. She goes by the name of Charlie. Bull tells her to come back when she is of age.

Later that night, Bull is reading files in his office. He comes out to find Marissa still there waiting for the little girl’s parents to come and get her. It is almost 9 pm. Bull tells Marissa to go home and he will take her home.

Bull arrives at the girl’s very large house. No-one is there. She asks him to stay until her father comes home. He feels bad so he does. Bull falls asleep on the couch. He is awakened by the girl’s father at 2:30 in the morning. He calls the police. Bull introduces himself. Bull is angry that the father would leave his daughter alone at night for so long.

Bull arrives at court the next morning looking like an unmade bed, according to Benny. They discuss the cell phone case they are on. Benny thinks they have it in a bag and can wrap things up early by 4 days. Bull sees a child court sign. He takes a walk over there to get some advice. A judge tells Bull he needs to report this and Bull is just the man the little girl needs to be a third party. Bull is hesitant but is forced to change his mind. He agrees to be the third party.

Back at the office, Bull gets a call from Family Court. He heads to his car and asks Marissa to call him in a bit. He is going to have a lot questions that he needs answers for. In the car, Bull learns that Charlie’s mom died 3 years ago.

Bull enters the court and comes face to face with Charlie’s father. He is devastated.

Marissa is on the phone trying to buy more time to pay her mother’s rent. They give her 72 hours. Benny barges in. Marissa starts crying. He asks her if she is okay. She tells him she needs to be alone. Benny offers her any help, money, anything. She confesses that her ex-boyfriend took all her money and took off to China. She feels like an idiot.

At court, Bull asks for a sidebar. He tells the judge he may have overreacted. The judge tells him to take a seat. They need to go through with the trial. The father takes the stand and talks about his late wife.

He is questioned about his daughter’s favorite book, and who her best friend is, as well as what she wants to be when she grows up. He cannot answer any of the questions. The judge ruled that Charlie will stay with her nanny. They will meet in 2 days time.

Outside of court, Charlie is thrilled. She thinks they got off to a great start. Her father runs after her. She doesn’t want to talk. Bull reminds her she can talk to him and it is almost Christmas.

Back at the office, Marissa finally breaks down and talks to Cable and Danny. Bull calls for them. He needs them to work on the cell phone case, getting the signatures of 3 CEOs by the end of the day.

Bull leaves for court. On his way out, Bull sees Charlie’s nanny. She cannot take it. She has a thesis due. She isn’t cut out for this. Bull tells her not to worry. They will contact the court. The nanny tells Bull Charlie needs to be picked up by 3:15 and it’s on him. He heads to the court, getting stuck in the cab in traffic only to have to turn around and head to Charlie’s school. Benny and Chunk are freaking out. They need him at the court.

On the courthouse steps, Bull runs into the cell phone clients. The man is angry. He wants Bull in the courtroom now. Bull tells him that he has a previous engagement. He looks to Charlie and Rex. Bull gives up the case. He tells the team to take off and enjoy Christmas.

Marissa gets word from Danny and Cable that the guy who conned her as a family in New York. Marissa surmises that he will be coming home for the holidays. She has a plan.

At the airport, Marissa waits for him with the FBI. Meanwhile, Bull plays Santa, paying Rex and Charlie a visit.