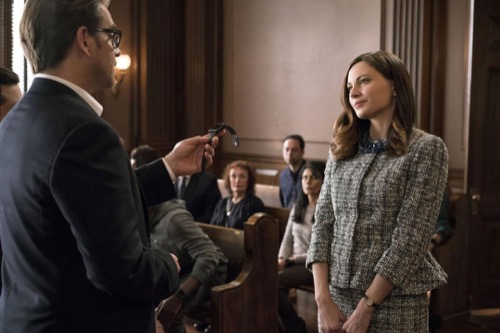 Tonight on CBS their  drama Bull inspired by Dr. Phil McGraw airs with an all-new September 26, 2017, episode and we have your Bull recap below.  On tonight’s Bull season 2 episode 1 as per the CBS synopsis, “Season 2 begins with Bull (Michael Weatherly) squaring off with his on-again, off-again romantic interest when he joins the district attorney’s case against a woman who claims she killed her billionaire husband in self-defense. Meanwhile, Chuck makes a decision about his future.”

The show opens with Kara and her husband arguing about their prenup. He refuses to renegotiate the agreement and then insults her. She stabs herself several times with a knife and when he grabs the knife from her hand she shoots him. Kara then calls 911 and reports that her husband tried to kill her. Bull joins the CEO of Clayton Communications and his board of directors. They offer him a job. Bull accepts and brings a check for ¼ of a million dollars to Marissa. She is unsure of his decision to work for the Clayton family to try to get a conviction of Kara for murder. She is surprised that Bull can be bought but he says for that much money he is willing to do almost anything.

Bull also tells Marissa that Diana is in town and wants to see him. The next scene is of Bull and Diana in bed. She asks him for a favor. She will be representing Kara and needs his help. She wants him on her team. Bull tells her he has already signed on to work with the other side. She is not happy and tells him she will see him in court. Bull and Marissa talk about getting ready for the Clayton family meeting as Christopher shows Bull his LSAT test scores. His scores are very good and he will be moving to Nashville to go to law school.

Bull asks Chris if he would be willing to stay and go to law school at night if he gives him a raise. Marissa tells him they just can’t afford it. Bull outlines his strategy to the clients. They interrupt him to say they would rather not go to trial and would be willing to push for the murder charges to be dropped if Kara would be will to take 500 million dollars to give any right she might have toward the Clayton family business. They offer Bull another 350 thousand if he can make the deal. Bull says he will get right on the negotiations.

Bull gets Diana on the phone but she keeps hanging up on him before he can make the offer. He finds her at her hotel but she continues to avoid him. He finally jumps into her limo and she is excited to hear the offer. They head to the hospital to tell Kara what the Clayton family is willing to offer. She tells Bull the company is work 6 billion and it will all be hers. There is no way she will take less. Bull and Diana leave and he tells Diana that Kara is lying about what really happened.
Bull meets with the Clayton family counsel and convince them to push the DA to press charges against Kara. He is sure she is lying and he knows he can prove it in court. If he wins they will pay him what they promised and offer a law school scholarship to the person of his choosing. They agree. Bull and his team start researching the backgrounds of the entire list of jurors. Under Bull’s guidance they question and pick the jury.

The trial starts with a great deal of press coverage. Kara is in wheeled into the courtroom with oxygen. The first witness describes the details of the prenuptial agreement and says that is Kara meet certain weekly, monthly and yearly sexually goals she would get more money for each year they remained married. The jury seems shocked and disgusted by this information. The jury is told if the couple had divorced today Kara would have received 16 million dollars.
The jury is then told that at Mr. Clayton’s death Kara would receive 6.65 billion. Marissa studies the jury and tells Bull they have 5 of the 12 juries on their side at the moment. The trial breaks for the night and Bull hears one of the jurors talking on the phone. He realizes she is from the same town as Diana and he thinks she is a plant. He knows he will now have to step up his game. He and Amy work through the night preparing to question Kara when she takes the stand. They realize that there were no finger prints on the gun that was used to kill Mr. Clayton.

Kara takes the stand and tells the jury that her husband was paranoid and was convinced she was having an affair. He called her into his study the night he died and wanted sex. She refused and he got very angry. He again accused her of cheating and reminded her of what the renup required her to do. He then got up from his desk and stabbed her. Bull’s attorney then asks Kara what he major was in college. She reports she was an anatomy major. He then asks her why her finger prints weren’t on the gun. He also tells her detectives found the remnants of gloves in her husband’s shredder in the office. The jury finds Kara guilty. Christopher receives a scholarship to law school. All of Bull’s employees get a raise.