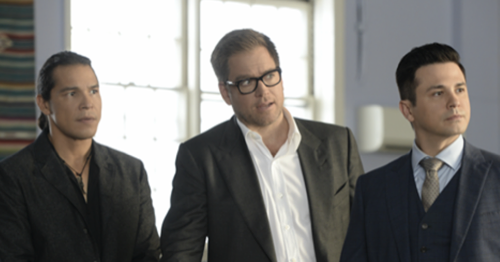 Tonight on CBS their  drama Bull inspired by Dr. Phil McGraw airs with an all-new October 31, 2017, episode and we have your Bull recap below.  On tonight’s Bull season 2 episode 6 as per the CBS synopsis, “Bull travels to a small town on a personal mission to help his high school sweetheart sue a local factory that she believes is making residents ill by contaminating the water.”

Bull meets with a young 24-year old attorney in his office. He doesn’t know why he is there or who he is. Marissa offers to explain who he is. His name is Zach and he has a case that Bull will be interested in. Bull wants him to get to the point and quick. Zach has a toxic case that involves his sick mom and 5 other people. He tells Bull his mom’s name is Allison Campbell. Bull smiles.  Ally was Bull’s first girlfriend. He took her to the prom.

The team meets with Zach. The case involves a Danville furniture company named Warwick whose toxic spray is making people sick. Bull leaves with Zach to head to Danville. Bull wants to review the settlement with Zach and Ally. He wants to avoid a trial if possible. If they have to go to court it will be Zach’s 1st trial. Bull is nervous.

Bull comes into the house to see a smiling Ally. They hug and talk. She has kidney cancer. She feels great for a couple of hours but then the simple things make her exhausted.  Bull wants to help. She needs him to talk to the others, convince them to accept an offer before they all go bankrupt. She loses her house next week.

Bull meets with all of them. The room is full of chaos. They are all angry. He tells them the truth. All they can get now is money – not the time or a way to get rid of their cancer. Ally’s nose starts dripping blood. She stands for a tissue. She is weak. Bull lifts her up like a bride and brings her to her room. Bull has changed his mind. He wants to go to court and make Warwick pay for what they did to her. She is up for it. She offers him a room in her house. Bull and Zach make plans.

Bull Skype’s with the team. He heads down to the kitchen when he smells something good. Ally cooked breakfast. He sits to eat. Ally wants to ask him to do something with her. It has been a long time. They sing and dance to You Down Wit OPP!

Bull and Zach meet with Warwick’s attorneys. Bull wants to know if they want to increase their settlement offer or are they ready to go to court. When they don’t back down, Bull goes at them. He lives and breathes court. He wants 10 times what they are offering and he also will demand they fix their pipes so others don’t get sick. He gets up and leaves.

Bull and Zach talk strategy. They need to find the outliers of the community, people who feel like they have been cheated.

On to court – the team cheers Zach on remotely as they begin jury selection. They find their group and court ends. Bull is stumped – why was the defense equally as happy with the jury selection. Bull feels like they don’t know their strategy like they thought.

The next morning, Bull cooks breakfast. He confesses to Ally that he wanted to come to her house decades ago when they were young. He wanted to sweep her off her feet and get married, have babies.

He tells her he got a call from his team. The other side thinks she is the cheater because she didn’t reveal in her medical history that her great-grandfather died of cancer.

Because she didn’t reveal a cancer history in her family they all think she is a liar.

They head into court. Zach starts cross-examination on one of their clients. The team tells Bull to call for a recess. Something is wrong and they need to talk to him. The judge denies it. Warwick’s lawyer takes the floor and begins questioning Bull’s client. He points out all he has learned – that Bull’s client is friends with his doctor who took the case after a civil suit was filed.

Bull leaves the courtroom. He is nerve-wracked. He tells Zack they need to let the man go. He is going to ruin their case.

Ally takes the stand. Zach says hi to his mom. He asks her why she moved to Danville and a little about herself and his dad who died in a blizzard working for Warwick. She explains that things happen and she isn’t mad, but sad that Warwick denied any wrongdoing. That is what hurt the most.

Bull gets a text during recess. It’s Warwick’s attorney. He wants to settle after Ally took the stand. Bull wants him to pay off her house too. He agrees. Bull and Ally celebrate in her room while listening to their favorite song!