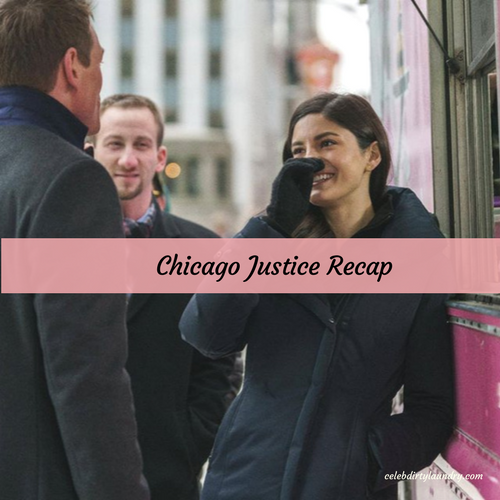 Tonight on NBC their new drama Chicago Justice airs with an all new Wednesday, April 16, 2017, episode and we have your Chicago Justice recap below.  On tonight’s Chicago Justice season 1 episode 9 as per the NBC synopsis, “A college coed is killed in an escape room, and a notorious classmate is suspected of the murder. Also, the Second Amendment is put to the test during a trial.”

The team arrives on the scene of a murdered female college student named Kennedy. She was killed in an escape room game. The team starts interviewing students that attended prison break themed party.  They suspect Abigail, another student who served time but was acquitted for the murder of her boyfriend in Spain.

The prosecutors talk. Is it too early to go after Abigail? They agree that they can take her in. They pay a visit to her mother, who doesn’t know where she is. They take a look at her room. She has been sleeping in the cellar. Her mother tells them that she has had trouble acclimating since getting out of prison. They find a piece of artwork under her bed from Todd, who appears to be an admirer.

They track him down. He says he hasn’t seen Abigail. They follow him to his house. A man follows behind Todd. They sneak in with guns raised. The man is a bounty hunter from Spain. They take Abigail in for questioning. Nagel tries to talk to her. She is angry and violent, attacking Dawson. They restrain her.

Spain wants Abigail back for a retrial. Peter goes to court to stop her extradition. The judge gives Peter 48 hours to officially file charges or they hand her over to Spain. A celebrity site published a pic of Abigail in the escape room. Dawson and Nagel track down the guy who took the photo as they create a timeline. It looks like Abigail couldn’t have killed Kennedy. They head to the hospital to talk to her. She tells them more about her friends, who are now the suspects.

Nagel and Dawson visit the crime scene. They find a gun, making Abigail a material witness in the murder case. They dust the gun and find 2 sets of fingerprints, one of them is Kennedy’s. She is the owner of the gun.

Kennedy’s father admits that he bought her the gun. He was worried for her safety. She didn’t have any enemies but she did have a run in with a political group at her college. They head to the college to talk to the Madison Club. They find out that Kennedy had a problem with the English teacher, who constantly spouted off his left-wing views. The teacher knew Kennedy was going to file a complaint after seeing something on her phone in class. He confiscated it.

Nagel and Dawson pay the teacher a visit. They question him about his confrontation with her in the student union. They leave after he makes a comment about Kennedy having a gun in the escape room, something that was public knowledge. They double back and question more students. They discover that Bethany, a student who was there, is the second set of finger prints. They head to trial.

The defense tries to paint a picture of self-defense. Kennedy’s father takes the stand. He explains that his wife was raped and killed in their home when Kennedy was young. He bought her a gun so that she could protect herself.

Peter cross exams Kennedy’s English teacher. Bethany smiles at him as he berates those who own guns. Bethany takes the stand. She had never seen Kennedy before. She admits that there was a struggle, that Kennedy had a gun. She shot her because she thought Kennedy was going to shoot her. She apologizes to the jury.

The prosecution has dinner with Nagel and Dawson. They find out that Bethany did know Kennedy. Abigail told them so. She takes the stand. She proves that Bethany is lying. The defense attacks her for her past troubles in Spain and her current extradition issues. She cries on the stand.

The prosecution goes through interviews and realize the professor and Bethany have the same exact quote about shooting up an NRA office. Bethany used it in a story she wrote for class. The next day, Peter questions Bethany about her relationship with the professor. Bethany breaks on the stand. Kennedy’s threats towards the professor was a threat to Bethany, who viewed the professor like a father figure. She shot Kennedy to stop her from ruining her life. Bethany is convicted and sentenced.