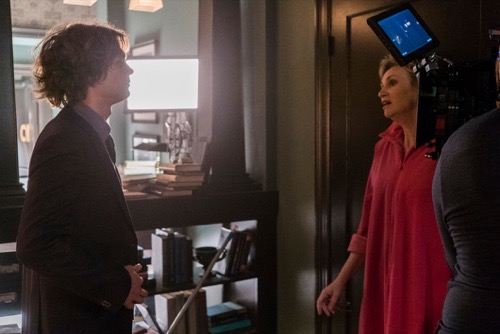 Tonight on CBS their hit drama Criminal Minds returns with an all-new Wednesday, February 1, 2017, episode called “Surface Tension,” and we have your weekly Criminal Minds recap below. On tonight’s Criminal Minds episode season 12 episode 11 as per the CBS synopsis, “The BAU investigate when a bizarre hieroglyph is found under a deceased homeless man’s armpit and it turns out to be the same one from previous casualties a few years ago. Meanwhile, Reid (Matthew Gray Gubler) decides to take his mother out of a clinical study early to bring her home with him.”

Reid was back. He had left to go take care of his mother and he was supposed to have everything handle by now however Reid had sort of forgotten to tell his friends that his mother had moved in with him. Reid had apparently thought that his mother would do better outside of the home and so he had brought her back to his place in order for her to be around something familiar. But the caretaker he had hired to look after her while he was gone had only been able to handle so much. So Reid’s first day back on the job was interrupted by an emergency call from home.

The caretaker had unfortunately quit after Reid’s mother attempted to kill her. Diana Reid had thought the other woman was a spy and so she had flooded the apartment as a way to get rid of her. However, that created a problem for Reid. Reid had had a job to do and most of his team was heading to Tampa, Florida because of two overdoes cases seemingly have a connection. So Reid was forced to make his excuses to his team because of his mother. He had needed to stay home to take care of her without a caregiver and so he had tried to stay connected with conference calls.

Reid had used that form of communication to talk to his team and tell them what he thought about the case though there were still a few things that were preoccupying his mind. Like his mother who was sadly and slowly forgetting some her memories with Reid. Yet, when he wasn’t watching to make sure his mother took her normal medication, Reid did have a few observations to bring to the table. Reid and the guys were looking into Helen Bollinger’s and George Findley’s deaths. The two victims had nothing common and surprisingly they had both been found overdosed.

A typical look at the victims would make anyone believe that they had killed themselves, but that wouldn’t explain the odd tattoo. The tattoo was an ink pen drawing and Reid thought it might possibly have a connection with the ancient pagan symbol for earth. Though that didn’t really help the team because it hadn’t’ explained why those two people had to die or why the Unsub had marked them. So the profilers decided to investigate the victims. They had spoken with Helen’s husband and had found out that she had the sleeping cabinets that killed her in her cabinet.

But her husband assured them that his wife would never have killed herself. He said that she had been just fine the last time he saw her and that nothing had been wrong. So it turns out that the husband had had questions surrounding his wife’s death. He had thought the police had rushed to judgment and that the symbol under her arm should have been properly investigated. He said that the symbol hadn’t been there when he last saw his wife and that it was odd that it was suddenly show up just as she allegedly killed herself.

So the husband had been asked if his home had been broken into and he told them that he hadn’t thought so. However, a break-in would explain how the Unsub got his hands on his pills and Prentiss thought that the Unsub might have also gotten something else. Prentiss thought that maybe the Unsub had taken something that he had used to force the victims into killing themselves. Helen had been the charity queen of the year and even George had served his country overseas as a veteran yet, regardless of whatever bad times they went through, both parties were of strong character.

They had each tried to help people in need and were considered to have high morals. Yet, is says more about the Unsub that he chose to target these people and a third victim helped put a few things together. The third victim was Owen Simms and again he was someone of high morals. He ran a donation soup drive and personally delivered the items to the homeless shelters. So Garcia was able to connect the victims by more than just their behavior because they had all been involved with the homeless community.

George had become homeless seeing as he wasn’t able to find a job following his return home, Helen on the other hand had volunteered at sour kitchens, and unfortunately Owen had frequent those same soup kitchens as he made deliveries for the soup drive. Though the only one that didn’t have a connection was Owen’s wife Beth. Beth had had some problems in the past and she wasn’t actually involved with her husband’s charitable work. So when the Unsub was forced to kill her because she had interrupted him, he had left her at the house.

The Unsub had moved everyone else’s body however he hadn’t moved Beth. So that led everyone to question why the intended victims had been staged at certain sights. Like landfills and other unusual points of terrain. But the guys eventually figured out that the Unsub had killed and stage his victims as part of a ritual. He had chosen people that were considered to be good because he had wanted to sacrifice the purist minds and spirits to his case. And the guys thought his cause was that the hand that defiled the earth had turned on itself.

However, Reid had managed to forget his problems and the fact that his mother had turned violent towards to him because he knew how to help his team. Reid had figured out that the symbol that the Unsub was drawing on his victims was the star constellation that usually meant hell. So Reid believed that Unsub had wanted to take people he knew would go to heaven and literally drop in hell. Which is why he had left their bodies by sink holes that thought were a proper gateway and so the guys were later able to incorporate that into their methods.

They had known that the Unsub was spiritual and had suspected that the recent victims weren’t his first. So Garcia worked some of her magic and figured out their Unsub was Bryce Jarvis. Bryce’s parents ran a discount spiritual center though they were in fact frauds that sold potions to keep the devil away and had reportedly sexually abused their son. Yet, Bryce hadn’t been able to hold down a job so he had still lived with his parents when they were finally arrested and that had led to a breakdown. And after the breakdown, Bryce went on to rape and murder six young women.

So once Reid knew about the constellation and had helped them choose the next sight where Bryce would appear – the BAU were finally able to take him down before he could hurt anyone else. But Reid had known afterwards that he couldn’t take care of his mother by himself because there were a few times where she didn’t even remember him.