Days of Our Lives Spoilers: 4 Major DOOL Bombshells – 2017 Goes Out with a Bang 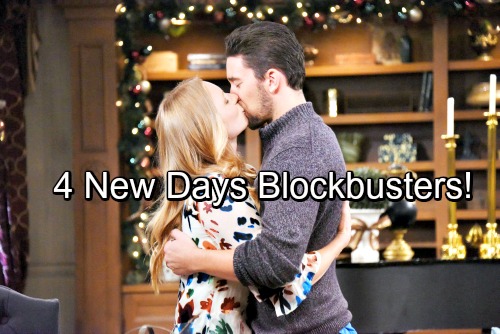 Days of Our Lives (DOOL) spoilers tease that some stunning moments are coming up. As the year comes to a close, the NBC soap will deliver some serious shockers. Here are four major DOOL bombshells you’ll want to tune in for.

This first one’s shocking because of the timing. On December 28, Days of Our Lives spoilers say Shawn (Brandon Beemer) and Belle (Martha Madison) will head home. Earlier reports suggested that they would be in town for the New Year’s Eve bash, but it seems they’re leaving a bit early. What a shame!

Many of Belle and Shawn’s scenes were cut during this stint, so let’s hope their next return comes with more substance. Days fans don’t get to see “Shelle” very often and we want to make the most of each comeback. CDL will keep you posted if any news surfaces about future stops in Salem.

Chad (Billy Flynn) and Abigail (Marci Miller) will be in charge of New Year’s Eve party planning this year. Since Chad will be busy with DiMera drama as well, Abigail will pick up the slack. She’ll make an intriguing discovery as she prepares for the guests.

Days spoilers say Abigail will mull over a discrepancy before the bash heats up. This could be a hint about some madness that’s set to happen later. It’s clear that this party will give Salem something to talk about!

New Year’s Eve always comes with kisses at midnight, so expect several characters to pair off. However, the partners they find may leave you taken aback. Days of Our Lives spoilers state that some unexpected pairings are going to shake things up and bring some sizzle.

A couple of mysterious characters will crash the New Year’s Eve celebration. At least they’ll be mysterious to the people of Salem! It looks like they’ll be in disguise, but we can pass along their identities. Vivian Alamain (Louise Sorel) and a new hunk named Stefan (Tyler Christopher) will be the uninvited guests. Days of Our Lives spoilers say they’ll cause quite a stir when they strut in.

DOOL has some fun stuff in store. We’ll give you updates as other details emerge. Stick with the NBC soap and don’t forget to check CDL often for the latest Days of Our Lives spoilers, updates and news.