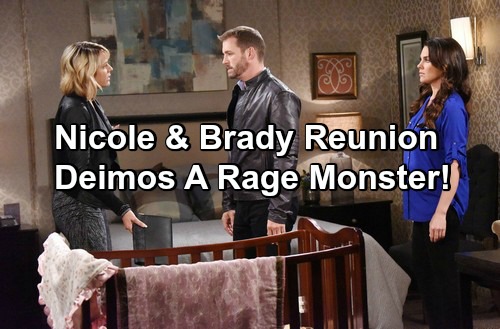 Days of Our Lives (DOOL) spoilers tease that Deimos (Vincent Irizarry) will grow concerned about Brady’s (Eric Martsolf) connection with Nicole (Arianne Zucker). He just spotted them sharing a hug that was a bit more than friendly. Nevertheless, Deimos will try to shake it off for now. He’s got bigger issues on his mind.

The stress is really mounting for Deimos. Between the technology war and the custody battle, things are definitely heating up in Salem. Days of Our Lives spoilers say Deimos will plan on taking down all of his enemies. He’ll also make a few moves in hopes of giving Nicole the upper hand in the fight for Holly.

As Deimos spirals out of control, Nicole will worry that she’s underestimated his ruthlessness. Nicole thought she could somewhat tame his wild streak. Deimos seems to think Nicole accepts him as is, but he may find out that’s not true. Nicole can only take so much of Deimos and the violent trail he leaves behind.

Meanwhile, Brady will focus on helping Nicole get through the crisis after crisis. He doesn’t want her to do anything crazy and blow her chances of winning custody. Days spoilers say Brady will support Nicole in any way he can.

When Chloe plays dirty, Brady will warn Nicole that there could be a problem. However, he’ll stand by his promise that Nicole will eventually be with Holly. Brady will insist that Nicole has to be patient. He’ll want her to keep thinking about the lifetime of memories she’ll make with her daughter.

Nicole will be discouraged, but Brady’s determination will give her strength. Days of Our Lives spoilers say Deimos will spot another warm moment between them. He may end up confronting Brady at some point. Brady will assure Deimos that he’s just friends with Nicole, but that may not be the case for much longer.

These DOOL exes were already close, but Daniel’s (Shawn Christian) death brought them even closer. Brady lost his best pal and Nicole lost the man she calls the love of her life. Now that Daniel’s heart beats within Brady, a “Bricole” reunion appears to be brewing.

If that happens, you can bet that Deimos will retaliate. Once Eric (Greg Vaughan) returns to Salem, he could even get involved in a triangle with Brady and Nicole. There are some nice possibilities ahead. We’ll give you updates as other Days news comes in. Stay tuned to DOOL and don’t forget to check CDL often for the latest Days of Our Lives spoilers, updates and news.