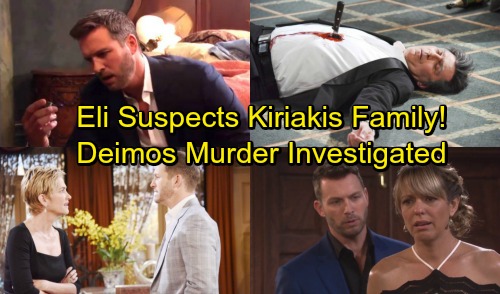 Days of Our Lives (DOOL) spoilers tease that Eli (Lamon Archey) will ponder the developments in Deimos’ (Vincent Irizarry) murder case. The whole thing had died down, but Brady’s (Eric Martsolf) stupid move led to more questions. Eli will feel like there are secrets within the Kiriakis household. He’ll definitely be determined to get to the bottom of all this.

DOOL fans can expect some tense moments for Brady. He’ll face quite a predicament in the coming weeks. Brady’s plan to frame Eve (Kassie DePaiva) backfired spectacularly. Now the Salem P.D. knows Brady or Victor (John Aniston) must’ve been in possession of the amulet. Naturally, that bumps them up on the murder suspect list.

Brady is pretty ruthless, but he let Nicole (Arianne Zucker) leave town for a reason. He knows Holly deserves to be with her mom. Of course, Brady couldn’t sell Nicole out now anyway. How’s it going to look if Brady accuses Eve and then says it was his ex? He’ll seem like a liar who’s scrambling to cover his own tracks.

Days of Our Lives spoilers state that Brady will just have to handle this. He made a mess with the setup, so it’s his responsibility. Victor will fume over the drama, but he’ll hope the Keystone cops are too dumb to solve anything. That’s one thing they’ve got working in their favor.

Once Eli starts sniffing around again, what will Brady do? He might try to divert suspicion somehow, but he’ll really be in over his head. Days spoilers suggest that Eve will sit back and gloat. She’ll undoubtedly enjoy watching Brady suffer through this investigation.

However, Brady and Eve might be able to work out a deal at some point. Could they reach a mutually beneficial agreement and put this Days feud to rest? Eve and Brady have been sparring lately, but there’s a thin line between love and hate. This would be a great way to start inching them toward a romance.

In the meantime, Brady will hope Eli doesn’t dig too deep! We’ll give you updates as other Days of Our Lives news comes in. Stick with DOOL and don’t forget to check CDL often for the latest Days of Our Lives spoilers, updates and news.