Days of Our Lives Spoilers: Brady Suspects Nicole and Eric Cheating – Catches Nicole In A Lie 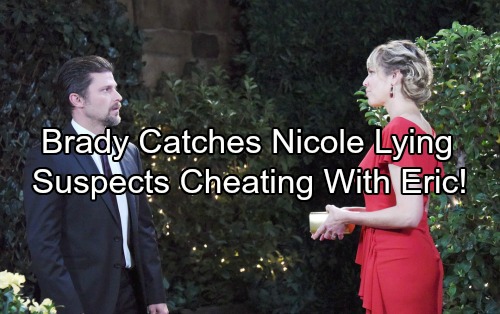 Days of Our Lives (DOOL) spoilers tease that Brady (Eric Martsolf) will become suspicious when he catches Nicole (Arianne Zucker) in a lie. It looks like Eric (Greg Vaughan) will let something slip about the night of the party. Nicole will try to cover her blunder, but Brady will still wonder what went down.

Of course, Eric and Nicole aren’t entirely sure of that either. Halo 2.0 led them down an interesting path, but everything’s a little fuzzy. Days of Our Lives spoilers say Nicole will eventually recall more about the time she spent with Eric. She may remember some details involving Deimos (Vincent Irizarry) as well.

DOOL fans can’t forget that there’s a murder investigation going on. Deimos met a grim fate at the Martin house. No one can really account for their whereabouts thanks to the drug in their systems. They’re just trying to make sense of the hazy flashbacks and keep themselves out of jail.

Days of Our Lives spoilers say Eric will also deal with a memory or two. He had feelings for Nicole before all this went down, but they’re about to rev up. The recollection of their close moments will only make Eric’s desires grow stronger. He’ll make a move this week that warms Nicole’s heart, but their connection will remain complicated. 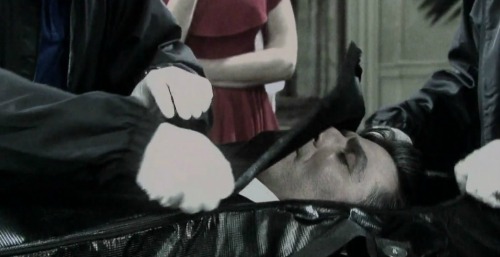 Later, Nicole will have another flashback that leaves her on edge. She may worry that Eric killed Deimos when he disappeared from the room briefly. Nicole might even think she did the deed herself. However, it’s doubtful Days would make either one of them the murderer.

Eric already went to prison for accidentally killing Daniel (Shawn Christian). Nicole has committed enough crimes lately, too. She’ll be getting Holly back down the road, so that pretty much counts her out. Days of Our Lives has most likely chosen a different culprit for this murder mystery, but which unlucky Salemite is responsible? This storyline still has some surprises in store.

As for Eric and Nicole, their bond will start to strengthen. In fact, Days of Our Lives spoilers hint that Brady will battle jealousy soon. When he walks in on Eric and Nicole’s deep conversation, Brady will suspect that their relationship is changing.

Is Nicole falling for Eric again? Will Brady find himself stuck in a love triangle? We’ll give you updates as other news comes in. Stay tuned to DOOL and don’t forget to check CDL often for the latest Days of Our Lives spoilers, updates and news.