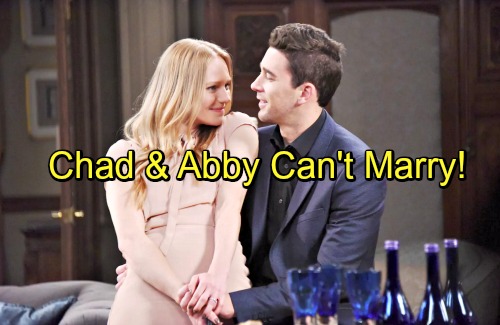 On September 22, Abigail and Chad will realize their nuptials are in jeopardy. Thanks to Abby’s fake marriage to Dario (Jordi Vilasuso), she’ll run into some legal troubles. Abigail may start to panic, but Chad won’t give up on tying the knot. He’s determined to make Abby his bride again and he won’t let Dario’s immigration issues stand in their way.

Next week, Days spoilers say Chad and Abigail will head off on a desperate mission. They’ll hope to track Dario down and secure his help in sorting all this out. Abigail nearly died because of Dario, so he obviously owes her. She won’t be afraid to beg if she has to. 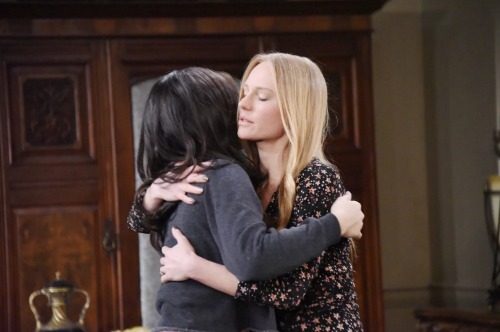 DOOL buzz has been hinting at a late September return for Dario. These Days of Our Lives spoilers seem to line up with that. Since Dario truly cared about Abigail, he’ll probably be willing to pitch in. Justin (Wally Kurth) will do whatever he can to fix this as well. It’ll be a real team effort as Chad and Abby’s wedding rapidly approaches.

By September 27, Abigail will get a lucky break. Days of Our Lives spoilers state that Justin will have some great news to pass along. Abigail’s legal woes will be cleared up just in time for her beautiful ceremony. She’ll be relieved when she discovers she can make Chad her husband as planned.

Later, Days spoilers say Chad, Abby, Paul and Sonny will all take their places at the church. This is going to be an event to remember, but not for the reasons they think. When a patient escapes from Bayview, he’ll spark total chaos for the wedding party as well as their loved ones.

It sounds like Ben (Robert Scott Wilson) will make a break for it and ultimately crash the double wedding. Some major Will (Chandler Massey) revelations will come out of all this. We’ll give you updates as other DOOL details emerge. Stay tuned to the NBC soap and don’t forget to check CDL often for the latest Days of Our Lives spoilers, updates and news.