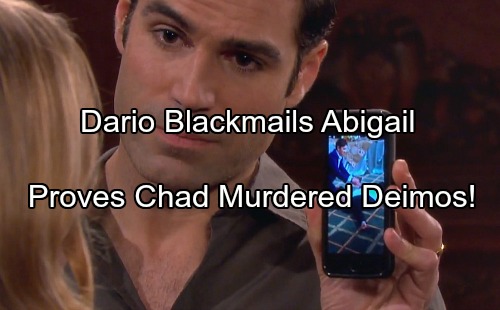 Days of Our Lives (DOOL) spoilers updates for the week of July 17 – July 21 tease that the jig is up for Dario (Jordi Vilasuso). He thinks he’s so smooth, but he’s definitely underestimating his new wife. Abigail (Marci Miller) has already pulled off some crafty moves. The bug she planted led to a shocking discovery.

Now that Abigail is aware of the counterfeit cash, she’s ready to expose Dario’s dirty dealings. Before she can do that, she needs some real proof. Abigail, Andre (Thaao Penghlis) and Theo (Kyler Pettis) will work together to make it happen. They’ll hope they can outsmart the sneaky Hernandez. 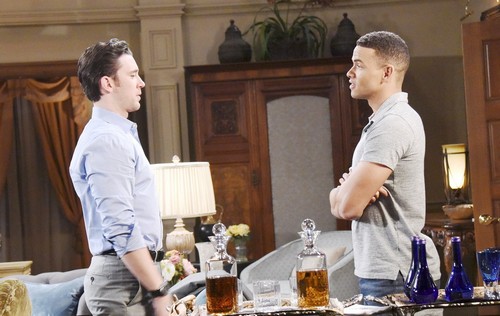 DOOL spoilers say Theo will nearly get caught hacking Dario’s laptop, but he’ll manage to avoid disaster. He’ll pass along updates and Abigail will have the evidence she needs. Dario is involved in a money laundering scheme and it will soon come back to bite him.

Once Chad (Billy Flynn) hears the news from Theo, he’ll reach out to his ex. Days of Our Lives spoilers state that Chad’s protective side will take over. He’ll be willing to handle this for Abigail, but she’ll choose to deal with it alone.

Abby foolishly trusted Dario and now she’s married to a crook. She got herself into this mess and she wants to get herself out. Days spoilers reveal that Abigail will stun Dario by announcing that she knows about the counterfeit money. Dario will quickly whip out his cell phone so he can drop a bomb of his own.

Days of Our Lives spoilers say Abigail will freak when Dario shows her a startling picture. She’ll see Chad standing over Deimos’ (Vincent Irizarry) dead body. Dario will contend that Abigail is going to keep her mouth shut or else he’ll give this to the cops. He’ll suggest that it proves Chad is the killer. 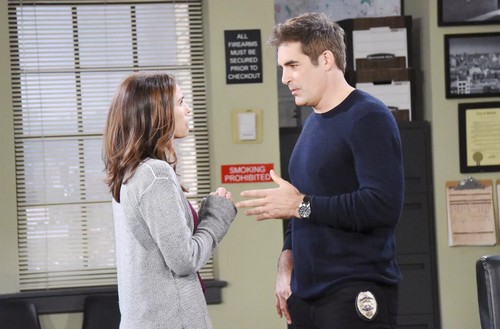 Abby won’t want to send the love of her life and father of her child to prison. However, she can’t control what the police already know. Days spoilers indicate that Hope (Kristian Alfonso) and Rafe (Galen Gering) will secure their own proof against Dario. They’ll eventually arrive to make an arrest.

Dario will continue to blackmail Abigail the following week, so maybe this case isn’t airtight. As for Chad, it’s doubtful that he actually murdered Deimos. Standing over the stabbed corpse doesn’t prove he plunged the knife.

The same is true for Sonny (Freddie Smith). This murder mystery will really heat up down the road. We’ll keep you posted as other details emerge. Stay tuned to DOOL and don’t forget to check CDL often for the latest Days of Our Lives spoilers, updates and news.