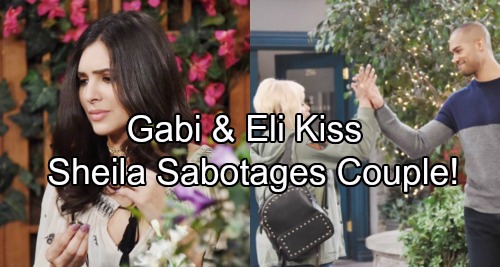 Days of Our Lives (DOOL) spoilers tease that Gabi (Camila Banus) will battle heartbreak over Chad (Billy Flynn) and Abigail’s (Marci Miller) wedding. The ceremony will be disrupted by Ben’s (Robert Scott Wilson) unexpected arrival, but they won’t let that stop them. Abigail and Chad will manage to tie the knot after the drama winds down.

Fortunately, Eli (Lamon Archey) will be there for Gabi during this crisis. He’ll continue to show that he’s patient and kind. Eli understands that love is complicated and you can’t just cut your feelings off. He’s giving Gabi a chance to heal and move on with her life.

Of course, Eli still intends to make progress if possible. Things will actually move along quicker than he planned. Days of Our Lives spoilers reveal that Gabi and Eli will lock lips next week. Despite lingering feelings for Chad, Gabi will think something feels right with Eli. She’ll sense that there’s a real spark between them.

However, a new threat has emerged and it could lead to chaos. Days fans know that Sheila (Tionne “T-Boz” Watkins) and Eli go way back. Eli was visibly upset by his encounter with this familiar face. She suggested that she served her time and eventually brought up Eli’s FBI job.

It sounds like maybe Eli was working undercover to bring down Sheila and her criminal friends. Perhaps Eli even began a romance with Sheila to keep up the ruse. Regardless, it’s clear that Sheila holds a grudge. There has to be a reason DOOL provided this shocking connection.

Bonnie (Judi Evans) is busy trying to blackmail Victor (John Aniston) and make Maggie (Suzanne Rogers) suffer. While Sheila waits on her money, she’s going to need something to do. Will Sheila decide to sabotage Eli and Gabi’s romance? She might as well get revenge during her Days stint.

Eli will need to stay on guard as long as Sheila’s around. She’s obviously not afraid to get her hands dirty. Sheila could be headed down a very destructive path. She may land behind bars again if she’s not careful!

What does the future hold for Eli now that Sheila’s lurking? Will he pay the price for hurting her in the past? We’ll give you updates as other Days of Our Lives news comes in. Stick with DOOL and don’t forget to check CDL often for the latest Days of Our Lives spoilers, updates and news.