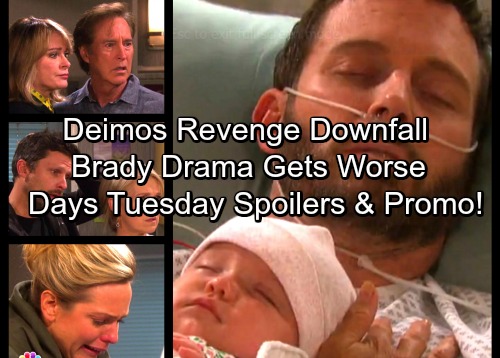 Days of Our Lives (DOOL) spoilers for Tuesday, May 30, tease that Chloe (Nadia Bjorlin) will stop by to see Brady (Eric Martsolf) at the hospital. He’s in bad shape, but she’ll want to show her support. Unfortunately, John (Drake Hogestyn) won’t appreciate this visitor. When he spots Chloe by Brady’s bedside, he’ll immediately fly into a rage.

Chloe will be taken aback by John’s anger. She’ll insist that she cares about Brady and wanted to check on him. Days spoilers say John will blame Chloe for Brady’s predicament. Since Chloe was determined to keep custody of Holly, Nicole (Arianne Zucker) resorted to kidnapping. Brady couldn’t let Nicole hide out alone, so he helped her flee to Canada. 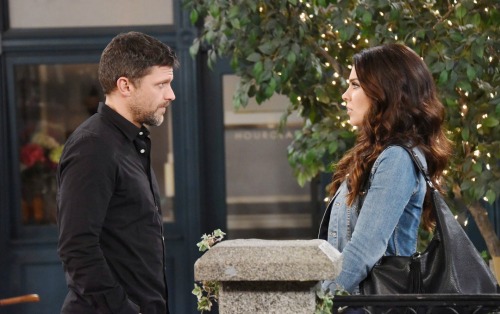 That led to Deimos’ (Vincent Irizarry) scheme and Xander’s (Paul Telfer) arrival. In other words, Chloe set off a chain reaction that put Brady’s life on the line. DOOL spoilers state that Chloe will defend her choices. She’ll suggest that Deimos’ recent actions prove she was right to keep Holly. Chloe has always claimed she was doing this for the baby’s protection.

Days of Our Lives spoilers reveal that their confrontation will get fierce. Marlena (Deidre Hall) will eventually hear the commotion. She’ll urge them to break it up and pay attention to Brady. They fear these could be his final moments, so they don’t need to waste them fighting nearby.

Meanwhile, Nicole and Eric (Greg Vaughan) will show up in Salem. They’ll try to remain inconspicuous with some disguises. Sadly, they won’t be able to avoid detection for long. Later this week, both Eric and Nicole will be taken into police custody. 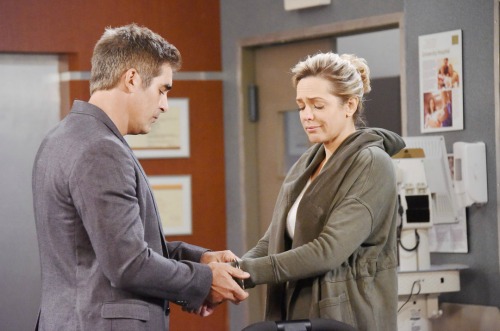 Elsewhere, Deimos will get some startling updates from Justin (Wally Kurth). He’ll find out that Victor (John Aniston) and the rest of the board members are standing against him. Deimos is being knocked off his throne at Titan Industries. He won’t have access to Titan’s financial resources anymore either.

Days spoilers say Deimos will also be ordered to vacate the mansion. He’ll be furious when his power is suddenly gone. Deimos will decide he needs to work on a revenge plot. However, it seems Deimos may truly go too far this time. His quest for vengeance will be his downfall.

Days of Our Lives fans won’t want to miss all the excitement. We’ll keep you posted as other news comes in. Stay tuned to DOOL and don’t forget to check CDL often for the latest Days of Our Lives spoilers, updates and news.