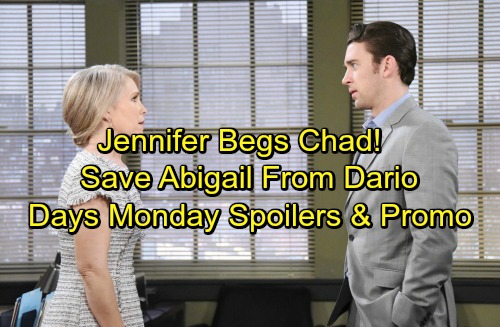 Days of Our Lives (DOOL) spoilers for Monday, July 3, tease that Dario (Jordi Vilasuso) will have something important to discuss with Abigail (Marci Miller). He’s tried to be patient with his fiancée, but he’s beginning to wonder if this wedding is really going to happen. Abby didn’t feel right about marrying another man before she even told Chad (Billy Flynn) she was engaged.

DOOL fans know that Abby also rejected the idea of a quickie divorce, but things moved along pretty fast anyway. Chad and Abigail were anxious to cut ties after their fight at the DiMera mansion. Of course, neither one of them truly wants to be apart. Deep down, Abigail and Chad realize they only belong in each other’s arms. 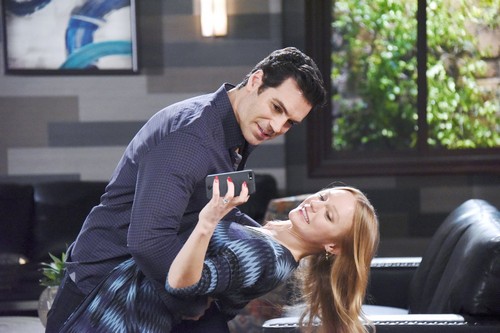 Nevertheless, Dario doesn’t care about being Abigail’s second choice. That’s certainly not a deal-breaker for the smitten Hernandez. Dario believes he can win Abigail over eventually, but he wants to start right now. Days spoilers say Dario will insist that they should get married as soon as possible.

Abigail will ultimately decide that she might as well move on. She doesn’t think Chad wants to be with her anymore and she promised to do Dario this favor. Days of Our Lives spoilers state that Abigail and Dario will make arrangements for a last-minute wedding on Tuesday. 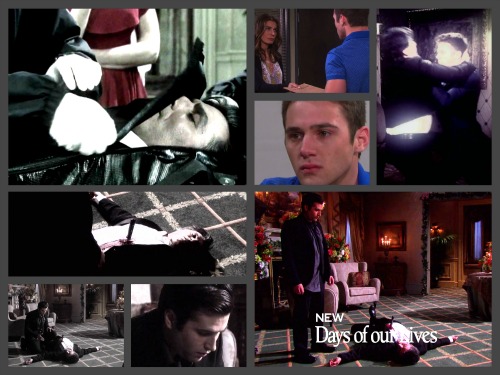 Jennifer (Melissa Reeves) will be horrified when she learns Abigail is getting married immediately. She thought she’d have more time to talk her daughter out of it. Since Jennifer couldn’t get through to Abby, she’ll ask Chad to if he’s willing to try.

Jennifer has had her fair share of issues with Chad, but she knows he’s the only one who can make Abigail happy. Days spoilers reveal that Chad will avoid getting involved. He probably won’t want to anger Abigail by butting in. Chad will also hope he can show Gabi (Camila Banus) that he’s accepted his ex’s impending marriage and is letting go. 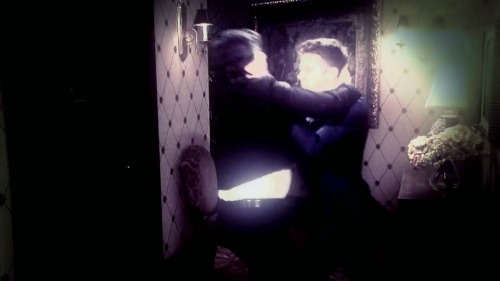 Naturally, big changes are coming up down the road. Meanwhile, JJ (Casey Moss) will be charged with Deimos’ (Vincent Irizarry) murder. He recalls attacking Deimos, but he can’t remember actually stabbing him with that knife. There’s a good chance it’s because JJ is innocent, but he’ll have to suffer until the next suspect emerges.

Days of Our Lives viewers won’t want to miss the twists and turns ahead. We’ll give you updates as other news comes in. Stay tuned to DOOL and don’t forget to check CDL often for the latest Days of Our Lives spoilers, updates and news.