Days of Our Lives Spoilers: Next 2 Weeks – Nicole’s Love For Eric Blooms After Discovery – Chad’s In Hot Water 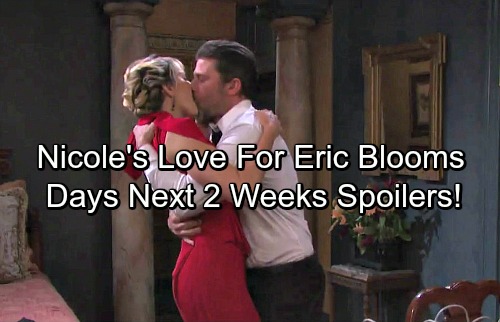 Days of Our Lives (DOOL) spoilers for the next two weeks, July 17 through July 28, tease that the drama will heat up in Salem. The week of July 17-21 will deliver some shocking moments on the NBC soap. For starters, the murder investigation will bring a few surprises. Once Xander’s (Paul Telfer) fingerprints turn up on the evidence, the Salem PD will send a team to interrogate him in Greece.

It’s doubtful that Xander is the true killer, but he’ll certainly enjoy all the attention. Days spoilers say Xander will try to see what he can gain out of all this. It’s worth mentioning that Ron Carlivati’s material will begin airing this week. As DOOL’s head writer, Carlivati intends on taking some of the current stories in new directions. 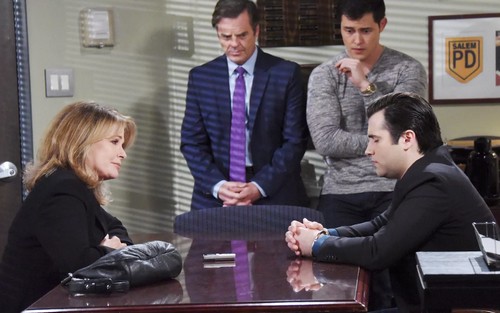 Paul (Christopher Sean) will worry as Sonny (Freddie Smith) remains behind bars. He’ll recruit John (Drake Hogestyn) for their own investigation. It looks like some crucial clues will surface pretty soon. Elsewhere, Dario (Jordi Vilasuso) and Abigail’s (Marci Miller) marriage will explode. Secrets will cause big problems for their little sham.

Other Days spoilers state that Steve (Stephen Nichols) will get a lead on who might be framing Kayla (Mary Beth Evans). Unfortunately, Steve will miss the mark on this one. He’ll initially suspect it’s a nurse instead of his scheming son. Tripp (Lucas Adams) will try to keep his horrible actions under wraps, but he could start to crack under the pressure.

Elsewhere, Adrienne (Judi Evans) and Jennifer (Melissa Reeves) will work together on a plan to save The Spectator. Anjelica (Morgan Fairchild) is a force to be reckoned with, but Adrienne will refuse to let her enemy win. Jennifer will do her best to pitch in on their last-ditch defense strategy.

The week of July 24-28 will give us some serious tension on Days of Our Lives. It seems jealousy will continue to be a huge issue for Brady (Eric Martsolf). DOOL spoilers reveal that Jennifer will call Brady out on his harsh behavior.

Of course, Brady might really have a reason to be envious. When Nicole (Arianne Zucker) finds out a secret about Eric (Greg Vaughan), they’ll grow even closer and their love will bloom. There’s a good chance she’ll discover Eric’s heartfelt letters. Across town, Abigail will deal with a blackmail plot. Dario will make sure Abby knows that he’s running the show.

Chad (Billy Flynn) will also end up in hot water thanks to something in his past. Some great stuff is coming up over the next couple weeks. We’ll give you updates as other Days of Our Lives news emerges. Stay tuned to DOOL and don’t forget to check CDL often for the latest Days of Our Lives spoilers, updates and news.