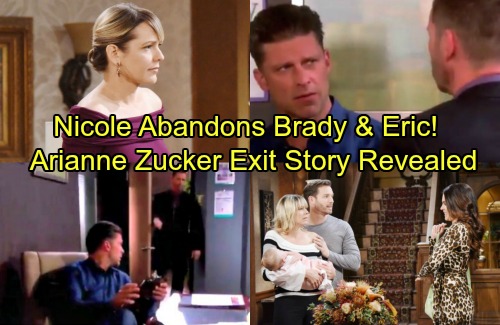 Days of Our Lives (DOOL) spoilers for fall 2017 tease that Nicole Walker (Arianne Zucker) will have to make a choice. Torn between Eric Brady (Greg Vaughan) and Brady Black (Eric Martsolf,) she can’t have them both.

Nicole finally has everything she ever wanted. A man who loves her and a child of her own. She even found purpose working at the Horton Center. However, she wasn’t counting on her old feelings for Eric coming back. But that is exactly what happened. Brady’s worst fears have come true.

Days of Our Lives spoilers confirm Arianne Zucker will appear for the last time in late November. A leaked set photo shows Nicole with a baby carriage. It appears that she is getting ready to leave town with baby Holly. However, Brady and Eric were not seen in the picture.

There are those who want “Ericole” to rekindle their romance. Others like “Bricole” together. However, if Nicole chooses one, the other will end up with a broken heart. Plus, both Greg Vaughan and Eric Martsolf seem to be staying on the soap opera.

That indicates that the two brothers will remain in Salem. However, Nicole will probably be leaving town alone. It is an ending that makes sense when you think about it. Eric and Brady are family and shouldn’t be battling over a woman. Nicole will probably realize this, not wanting to cause further problems.

When talking to Abe Carver (James Reynolds,) he offered Nicole some wise advice. He felt that Nicole was with Brady not out of love, but because of gratitude. He certainly has done a lot for Nicole and Holly.

As for Eric, it probably wasn’t the best idea to work so closely with a former flame. However, are Eric and Nicole really meant to be together? Or is the attraction due to forbidden love? Perhaps it is just something familiar.

Days of Our Lives spoilers tease that Eric will decide to leave Salem. Marlena Evans (Deidre Hall) will search for her son. Once she locates him, Marlena will talk to Eric about his feelings for Nicole. However, she won’t let him stay out of town long. She will try to coax him back to Salem.

When he returns, Nicole will have to confront her feelings and make a decision. Unfortunately, it seems that everyone involved will end up heartbroken and alone. Keep watching the NBC soap and check back often with CDL for the latest Days of Our Lives spoilers, updates and news.