Days of Our Lives Spoilers: Stefan Wants DiMera Enterprises and Abigail – Chad Teams Up With Abby to Stop Slick Brother 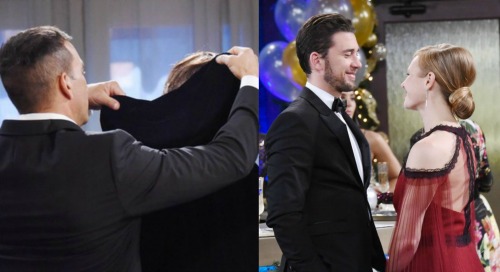 Days of Our Lives (DOOL) spoilers tease that Stefan O. DiMera (Tyler Christopher) will cause big trouble in Salem. He’ll show up with Vivian (Louise Sorel) and after introductions are made, Stefan will get down to business. Vivian will have some intriguing plans and she’ll hope Stefan can help her pull them off.

Of course, Stefan will have a few goals of his own in mind. For starters, he’ll make it clear that he’d like to be with Abigail (Marci Miller). She’ll catch Stefan’s eye right away, but she won’t fall for his charm anytime soon. However, Abby might be able to use Stefan’s interest to her advantage.

Before we get to that, let’s talk about what else Stefan may have up his sleeve. As Stefano’s (Joseph Mascolo) son, he’ll undoubtedly be looking for a piece of the DiMera pie. Since Stefano is supposedly still alive and out there somewhere, Stefan might produce an altered will or some other surprising document. He may intend to pursue control of DiMera Enterprises at a board meeting.

Days of Our Lives spoilers state that Chad (Billy Flynn) won’t go for that idea. He’ll believe Stefan is the sabotage culprit, so that will obviously lead to concerns about his agenda. Chad will be determined to protect the family legacy for Thomas’ sake. He won’t want Stefan tarnishing the DiMera name again and putting the company on a dark, destructive path.

DOOL fans can expect Abigail to fully support her husband. She’ll assure Chad that she’s willing to do whatever he needs. That’s where Stefan’s crush might come in handy. Perhaps Abigail can throw herself at Stefan as part of a secret plot. Days of Our Lives spoilers say Chad and Abby will come up with a strategy to stop Stefan, so the seduction angle might be their best option.

Unfortunately, their scheme may hit some snags. Days spoilers indicate that Stefan will be one slick character! Chad will soon realize that he’s dealing with a true DiMera, which means Stefan won’t be easily manipulated. Like it or not, Stefan will insert himself in all the corporate drama over the next couple months.

Days spoilers say Stefan’s going to cause plenty of problems after his long-awaited debut. We’ll give you updates as other DOOL news comes in. Stick with the NBC soap and don’t forget to check CDL often for the latest Days of Our Lives spoilers, updates and news.