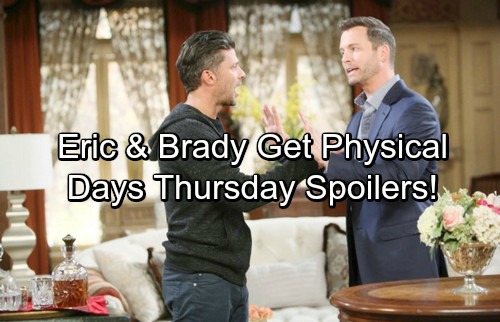 Days of Our Lives (DOOL) spoilers for Thursday, October 26, tease that Eric (Greg Vaughan) will show up to see Brady (Eric Martsolf) at the mansion. He’ll get right down to business by asking why Nicole (Arianne Zucker) left Salem. Eric will insist that he knows something must’ve happened. He’ll demand to know what Brady said to make Nicole leave.

Brady will insult Nicole and get in Eric’s face about what he forced him to lose. Eric will choose to punch that pretty face in Thursday’s DOOL episode! He’ll finally unleash all that rage and pain he’s been dealing with. Chloe (Nadia Bjorlin), on the other hand, will find a way to support Brady. She’ll feel like he could use a friend right now, so she’ll be there for him in his time of need. 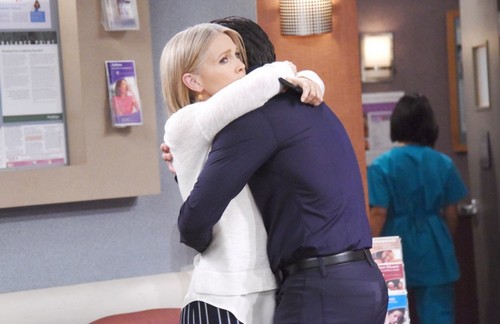 Other Days of Our Lives spoilers say Kate (Lauren Koslow) will clash with Jennifer (Melissa Reeves). They might disagree about Lucas (Bryan Dattilo) or perhaps a news story Jen’s working on. Whatever the case, Kate will probably shoo Jennifer along soon. She’ll have much bigger problems to tackle, so Jennifer will need to get lost.

Days spoilers state that Chad (Billy Flynn) and Kate will make a shocking discovery. They’ll realize DiMera Enterprises is under attack. Someone is sabotaging the company, but it won’t be easy to figure out who’s behind this massive threat. All Kate will know is that she needs to take care of it ASAP.

Elsewhere, Hope (Kristian Alfonso) will get into an argument with Rafe (Galen Gering). He’s always got something to say about how she does her job! Days of Our Lives spoilers reveal that Rafe won’t approve of a recent decision. It looks like he’ll have an issue with Hope throwing Sami (Alison Sweeney) behind bars. 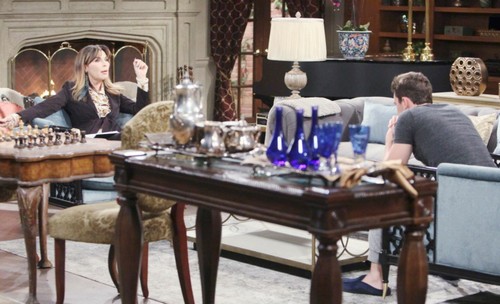 Rafe might have a decent point here. JJ (Casey Moss) put a gun to Ben’s (Robert Scott Wilson) head and was only suspended for a couple days. Hope should also cut Sami some slack for threatening Dr. Rolf (William Utay). She’s just a grieving mother who’s desperate for answers.

Sami’s situation will be resolved sooner or later, so let’s focus on the hunt for Will (Chandler Massey). Days spoilers say Hope will find another piece of the puzzle on Thursday. After a little more digging, Dr. Rolf’s money trail will likely lead to Memphis.

It sounds like some fun scenes are coming up. We’ll give you updates as other DOOL details emerge. Stay tuned to the NBC soap and don’t forget to check CDL often for the latest Days of Our Lives spoilers, updates and news.