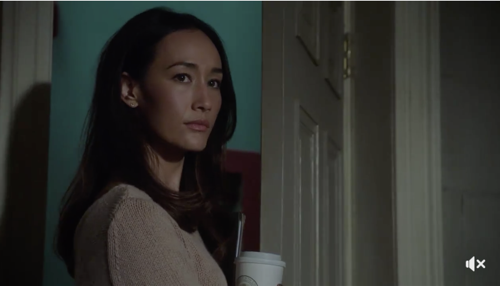 Tonight on ABC their new conspiracy thriller Designated Survivor airs with an all-new Wednesday, December 13, 2017, episode and we have your Designated Survivor recap below. On tonight’s Designated Survivor season 2 episode 10 called “Line of Fire,” as per the ABC synopsis, “It’s Christmas Day and President Kirkman is alerted to a group of religious extremists who refuse to evacuate when a forest fire threatens to engulf their cabin. Deploying Emily and Aaron to help diffuse the situation, Kirkman must act quickly to save multiple lives at stake. Meanwhile, the First Lady finally gives her testimony to the FBI director, while what happens next changes the lives of the Kirkman family forever. The Season 2 midseason finale.”

Hannah searches through Damien’s things while he is asleep. She grabs a flash drive and copies it quickly as he calls for her. She makes it just in time. He brings her back to bed.

The president and the team go over what to do with a national park forest fire that has been burning for more than 20 days. Seth suggests letting the fire burn itself out. It’s nature. They cannot control that. Leo thinks this is a bad idea because some people in the public see the president as a god. Things get worse when a small church in the area refuse to leave. They lock themselves in a small house after being warned that they must leave.

The president sends Aaron to the scene. The churchgoers refuse to leave unless one of their parishioners is released with her daughter from the hospital. The hospital is making a little girl go through a surgery that is against their religion. They aren’t moving until she is free.

Emily pays a visit to the mother, Carrie, at the hospital. She tells Emily about Grace. She needs open heart surgery, but Carrie is against that.

Emily returns to the tell the president. Kendra thinks their best bet is to challenge their competence legally. The president wants to talk to the leader.

Hannah heads to the office and learns that the call to tip off the banker did come from Damien’s phone. His phone was also cloned. Could he have done that himself to throw them off his trail?

The president video chats with the leader of the church. He isn’t budging. And since he doesn’t fit the legal definition of crazy there isn’t much they can do.

Aaron is given a video of Damien and news that there isn’t a British organization that can claim him as one of their employees.

Kendra meets with the prosecution to strike a deal on Alex’s mother’s case. He has a counteroffer. Kendra brings it to Alex and the president. Alex can plea no contest. The president thinks this makes her look guilty. Alex wants to accept the plea.

Aaron and Hannah meet about Damien. He shows Hannah the video, placing Damien at the scene of the arson. He was there 2 hours earlier and cut the fence. Aaron knows they are together. He tells her she is off the case. She is compromised. She tells Aaron she has a score to settle. He allows it but she will call the shots.

Seth has to dodge questions from the press about the fires. They think he is pandering to religion. Seth assures them he is not.

Hannah meets with Damien for lunch. She gives him an expensive watch. He wants them to go away to Hawaii. He asks her if she has time for a quick afternoon devotion. She turns him down.

The president speaks with Carrie, the mother of the baby. It looks as though she is going to go through with the surgery for her daughter willingly if they use synthetic blood.

Hannah heads back to the office. She tracks Damien down by the watch she just gave him. She asks him to meet up. She is free now. He tells her cannot. He is at the embassy.

The president tells Alex that she needs to make a decision. He knows it will be the right one.

Hannah follows Damien and takes pictures of him meeting a man in the park. Meanwhile, Emily stays with Carrie during the surgery. There are complications. The baby needs hemoglobin. Emily talks Carrie into giving her blood. Carrie agrees to do it.

Alex arrives at court. She is bombarded by the press with questions. Alex asks for the proceedings to be unsealed. She wants to be transparent to the public.

Emily sits with Carrie who cannot stop thinking about a scripture about daughters and salvation. The doctor calls for them. The baby is going to make it through. Emily calls the president to give his word.

The president calls the leader who agrees to get his people out of harm’s way of the fire. Meanwhile, Alex adds her own comments to the court records, detailing the cost of $16 million dollars for the investigation the prosecutor opened against her. He becomes so rattled he demands his typists stop recording what Alex is saying.

Aaron meets with Hannah. He thinks he has a lead on Damien. He could be MI6 and has turned.

Hannah meets Damien in the middle of a bridge. She pulls a gun on him. He reaches into his pocket. She fires. He goes over and into the water. She heads over to look down. He is underwater.

The president goes to the hospital to meet baby Grace. Alex calls and gets his voicemail. She beat the investigation!

Hannah is at a bar drinking. Down the river, Damien pops up. He is injured but alive. He was wearing a vest.

Alex is smiling as she looks at her phone in the back of the car. A truck runs red lights and hits the vehicle she is in. The secret service all get out of their vehicles and scramble to her.

The president checks his voicemail and drops the phone to the floor in shock. He drips to his kneed and screams in pain.