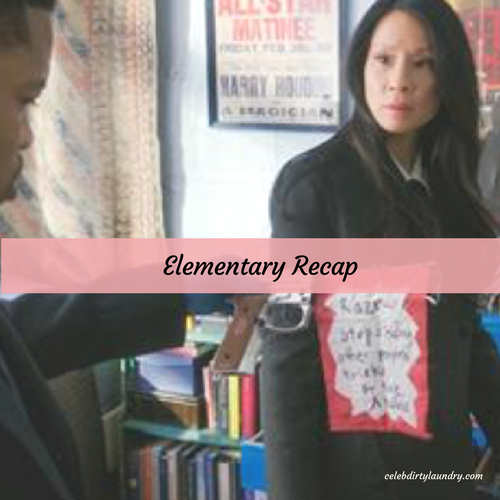 Tonight the CBS series Elementary airs with an all new Sunday, April 16, 2017, season 5 episode 19 and we have your Elementary recap below. On tonight’s episode called, “High Heat” as per the TV Guide synopsis, “A magician is killed while performing a classic stunt, triggering an investigation by Holmes (Jonny Lee Miller) and Watson. (Lucy Liu)”

Internal Affairs is at the station investigating Marcus because a man complained that he pulled a gun on him the night before while he was off duty. Watson walks in on a woman holding a gun on Sherlock. She pulls the trigger and Sherlock shows Watson that he has the bullet in his mouth. She is angry at him for scaring her but Sherlock was researching the death of a magician, Claude who died while performing that trick.

Watson, Marcus and Sherlock search the magician’s house and find a threatening note from another magician named Anibus. Watson researches the man who has made the complaint against Marcus. His story is very convincing. Anibus is another magician who dated Claude. While she was angry at Claude she would never hurt him. She does say he liked to gamble and was known to cheat. Maybe he double crossed the wrong person?

Sherlock finds the shop where Claude was gambling illegally. The owner admits he and Claude were working together and Claude was cheating a man named Keating. Keating owed Claude a great deal of money. Watson reviewed the man’s statement against Marcus and she thinks he has been coached. She thinks Chantelle’s ex has something to do with it. Keating says Claude wanted information about Turnleaf books. He wanted him to make copies of all of their ledgers from 1963.

Keating made the copies which filled several boxes and gave them to Claude. The team realizes that the boxes weren’t in Claude’s house. They think he was murdered because of what was in the ledgers and that the murderer took them before they killed Claude. Sherlock realizes that Turnleaf books was the publisher of the bible of magic tricks. Quinn Malcolm is a well know magician who is obsessed with finding out who wrote the book.

Quinn gives Sherlock a hard drive. Marcus finds Chantelle’s ex and asks if he is the one behind the complaint but he denies it. Sherlock uses the information on the hard drive to interview several people but doesn’t find anything helpful.

Sherlock decides he will try to figure out who wrote the magic bible. With the help of Watson they realize that the author of the book also illustrated the book. Based on their research they realize that the killer isn’t trying to figure out who wrote the book. He or she is trying to keep it a secret. Sherlock, Watson and Marcus interview Clifton who owns the company that now publishes the book. The book makes a significant amount of money for the company. The team thinks someone at the company killed Claude to keep the author’s name a secret. Clifton says they are completely wrong. The company knows who wrote the book and has been paying his estate for years. The author was his grandfather.

The team turns to a different motive. Claude bought a book about Nazi Germany on an online auction and the man who lost the auction was very anger. He is interviewed but denies any involvement. Marcus tells Chantelle that he is sure Roy is setting him up but he can’t prove it.

Sherlock studies the Nazi book and realizes that the author of the magic bible also illustrated the Nazi book. Clifton killed Claude because he was about to tell the world that his grandfather was a Nazi. He is arrested. Watson finally finds evidence that the man who made a complaint against Marcus was a neighbor of Roy’s several years ago. When he is interviewed he admits everything and Roy is arrested. He is released pending trial. Marcus goes to Chantelle’s apartment to tell her the good news and she is on the floor in a pool of blood.