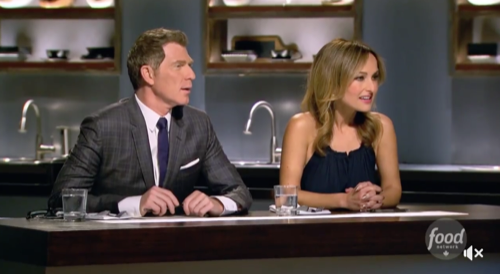 Tonight on the Food Network their elite food competition show Food Network Star airs with an all new Sunday, August 6, 2017, episode and we have your Food Network Star recap below.  On tonight’s Food Network Star season 13 episode 10 as per the Food Network synopsis, “The three remaining finalists are in for a shock when they learn that a previously eliminated finalist is re-entering the competition. With the help of former finalists, the last four competitors must cook for the privilege of making a pilot. Former winner Eddie Jackson is back to help select the three finalists, who then shoot pilots directed by none other than Guy Fieri.”

So make sure to tune in tonight between 9 PM – 10 PM ET for our Food Network Star recap below.  While you wait for our recap make sure to check out all our television news, spoilers, pics, videos & more, right here!

The show begins with the three remaining contestants entering the kitchen. There is just one challenge standing in the way of filming a pilot to become the next Food Network Star. Bobby then shares that all of the previously eliminated contestants had a cook-off to determine which one would return to the show to continue the competition. Star Salvation was shown earlier and the winner is Cory. He joins the other three in the kitchen.

Each of the four now must make a dish that perfectly expresses who they are. Then they will then have one minute to present their dish. The top three contestants will then film a pilot for their possible new show. All of the previously eliminated chefs return to the kitchen and the remaining contestants draw names to see who will be their assistant while they cook their dish. Matthew draws first and picks Addie’s name. He is not sure if they are a good match. Jason picks Suzanne and he is not happy. She had really struggles while she was in the kitchen last time. Rusty picks Nancy and Cory pick Tao.

Cory and Tai get starting making roasted branzino with herb vinaigrette. Rusty decides that he and Nancy will make crawfish boudin balls with andouille grits and show-chow. Rusty doesn’t have a lot of confidence in Nancy’s abilities so he plans to have her do all of the chopping for him. Matthew and Addie will make blackened swordfish with tomatillo salsa and avocado slaw. Matthew will do all of the cooking with Addie concentrates on the prep. Jason has 45 minutes to make a maple nut tart with whiskey chocolate mousse and he is worried that Suzanne will be more of a hindrance rather than a help. He tries to come up with tasks to keep her out of his hair. What he has left he jokes.

Addie worries that Matthew has too much going on with his dish. Rusty worries that his boudin balls may be too dense and Jason struggles to get Suzanne to follow his simple directions. Eddie Jackson joins Giada and Bobby in judging the dishes. Eddie is the winner from last year’s competition. Each of the contestants films their one minute clip. Matthew presents first and while his description sounds delish the judges don’t think he told a story that helped them understand his connection to the dish. It tastes good but Bobby thinks it has 4 too many ingredients.

Jason is up next and does a great job making the connect to his dish. Giada loved his enthusiasm. The biggest criticism is that the bourbon is too strong and needed to be cooked off longer. This is the task that Jason assigned to Suzanne but she just wouldn’t follow his directions. Cory can’t believe that just two weeks ago he was off the show and now he is one step away from becoming the next Food Network Star. Cory is much more comfortable presenting his dish but forgets to tell the judges what kind of fish he made. The taste is wonderful. Rusty is the last to present and speaks from the heart. As he speaks about his father he tears up.

Rusty recovers as best as he can and the judges love his food but the boudin balls are too dense. Jason is the first to be named to move on and make a pilot. Cory will also move forward and make a pilot. Rusty and Matthew are the last two fighting for the last spot. The final spot goes to Rusty and Matthew is sent home. He is very sad. This is the second time he has come so close yet just can’t make it over the final hump. Jason, Cory and Rusty move on to the Original Farmer’s market. They will be working with famed director Guy Fieri. Rusty will film at Magee’s market and focus on their world renowned French dip. Rusty has a rough start by calling the restaurant the wrong name several times until Guy stops him. Rusty is very nervous and has to start over several times. Zac Brown from the Zac Brown Bands calls Rusty and helps calm his nerves considerable. This time he gets his introduction down pat but still has some bumps.

Cory is the next to film and will be at Loteria Grill which is an authentic Mexican restaurant that makes the traditional foods of Mexico. Guy challenges Cory to be himself and interrupts him several times because he is just too polish. Guy calls Cory’s best friend to help him tear down the walls so Cory can be more authentic. Cory does a great job and is very thankful for Guy’s help and coaching. Jason is the last to film his pilot and will present from Monsieur Marcel. In his first take Guy thinks he seems too rehearsed and encourages Jason to have fun and be himself. Jason then struggles to pronounce the name of the bistro several times. He is happy to finally finish. Next week the next Food Network Star will be named.