General Hospital Spoilers: 4 Burning GH Questions and Why the Answers Will Be Must-See TV! 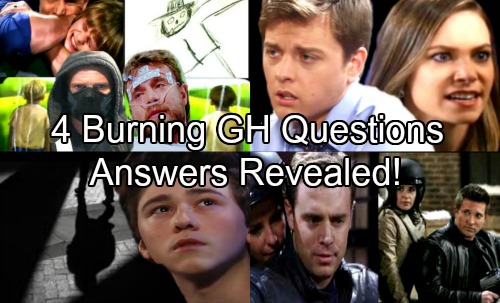 General Hospital (GH) spoilers tease that several mysteries are in play on the ABC soap. The show is obviously gearing up for some shocking revelations. The drama is set to explode and there should be major consequences for many Port Charles residents. Here are four burning questions that GH needs to answer.

1. Which Jason is the real one?

All the signs point to Steve Burton being the authentic Jason Morgan (currently played by Billy Miller), especially since we know Burton signed a three-year contract. However, we can’t rule out some Helena (Constance Towers) trickery just yet. Implanted memories are a piece of cake on a soap, so it’s a good idea to keep an open mind.

Even though the evidence is in Burton’s favor, it’ll be fun to watch the action heat up. When one man is finally revealed as the true Jason, we’ll see some gripping fallout. The General Hospital stars involved in this storyline could get some great Emmy reel material.

2. Which man will Sam choose?

This question is eating away at every “JaSam” fan right now. Everyone’s curious about the Jason identity issue, but that may not matter to Sam (Kelly Monaco) in the end. She’ll simply have to decide who she’s in love with. Whether you’re on “Team Steve” or “Team Billy,” GH will keep you on the edge of your seat!

3. Who are Oscar’s parents?

This mystery has been simmering since Oscar first arrived in Port Charles. Who are Oscar’s parents and why is the show being so secretive about them? Their identities must be awfully shocking!

Brenda Barrett (Vanessa Marcil) and Tamara Braun’s potential character have been tossed around as possibilities for Oscar’s mom. There’s also been speculation about Dante (Dominic Zamprogna) or Patient Six (Steve Burton) being his dad. It should be interesting to see what GH goes with.

General Hospital spoilers indicate that the proof is piling up against Nelle (Chloe Lanier). The show is certainly making Nelle look guilty, but things aren’t always as they seem. The accusations against Nelle will intensify as we head into November sweeps, but did she really kill Zack?

GH has been known to throw in some twists, so we might want to take a closer look at Sharon (Brea Bee). Is she truly grieving for her brother or did she frame Nelle for the inheritance? Of course, making Nelle a murderer would also be intriguing. Whatever happens, Nelle’s lies won’t help the situation!

Which burning questions are you ready to see answered? What outcomes are you hoping for? We’ll give you updates as other news comes in. Stay tuned to the ABC soap and don’t forget to check CDL often for the latest General Hospital spoilers, updates and news.