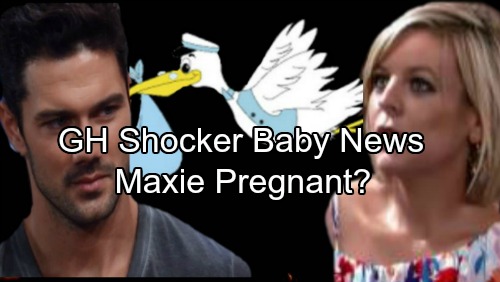 General Hospital (GH) spoilers tease that Maxie (Kirsten Storms) will face even more drama. She thought she had a brilliant plan to protect Nathan’s (Ryan Paevey) secret, but Spinelli (Bradford Anderson) managed to bungle it. Unfortunately, the Man Landers mayhem isn’t over yet. Now that Nathan has been exposed, he’s going to be a busy man.

GH spoilers say Nathan will have to do plenty of interviews and other appearances. He’ll fulfill his promise to help Amy (Risa Dorken), but that could cause some issues. Spinelli suggested that Nathan seemed awfully comfortable in the spotlight. Maxie tried to dismiss the idea, but she had a peculiar look on her face.

Since Maxie now has to share her husband with his adoring fans, she may experience some jealousy. Maxie might be a bit envious of Nathan and Amy’s bond, too. Luckily, there probably won’t be any catfights. In fact, Amy and Maxie will establish a stronger connection next week.

The whole truth about Man Landers should come out eventually. General Hospital will surely reveal that Amy is the one dishing out advice, not Nathan. If Amy believes her dreams are going up in smoke, that could draw Maxie closer.

That’s especially true if Maxie feels responsible. She asked Spinelli to look into this before she knew Nathan was involved. Spin’s interference ultimately resulted in Nathan’s exposure, which could lead to Amy’s exposure as well. Of course, this could open the door to a fraud case and all kinds of problems. Maxie and Nathan’s marriage could take a hit as everything comes crashing down.

It’s clear that Maxie’s going to be feeling a little off in the coming weeks, but this could be about more than just the Man Landers aftermath. General Hospital spoilers say Maxie’s life will take an unexpected turn on October 10. It sounds like a major curveball is headed Maxie’s way.

Could Maxie be pregnant?! GH buzz has been hinting that a kid may be in “Naxie’s” future. Perhaps Georgie is getting a brother or sister. Some happy baby news might be exactly what Maxie and Nathan need. They could put the Man Landers fiasco behind them and focus on preparing for their bundle of joy.

Do you think it’s time for Nathan and Maxie to expand their family? Does Maxie already have a bun in the oven? We’ll give you updates as other GH details emerge. Stay tuned to the ABC soap and don’t forget to check CDL often for the latest General Hospital spoilers, updates and news.