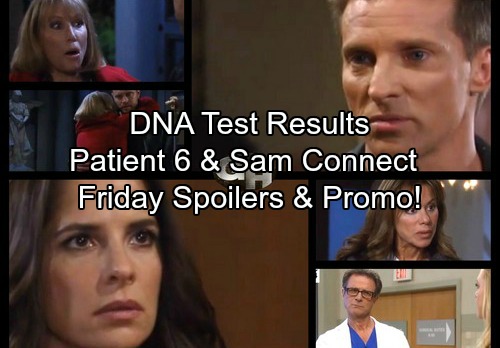 General Hospital (GH) spoilers for Friday, November 10, tease that Sam (Kelly Monaco) will have another chance to chat with Patient Six (Steve Burton). She’ll still have a hard time wrapping her head around this mess. Sam loves current Jason (Billy Miller), but she can’t deny the connection she feels when she looks at Patient Six.

GH fans can expect some emotional moments on Friday. Sam will try to figure out if she’s just drawn to Jason’s old face or if there’s a deeper bond between them. Of course, she won’t let her guard down. Part of Sam might buy Jason’s suspicions and part of her just knows she has a lot to lose.

Patient Six will talk to Sam about Danny (T.K. Weaver) as well as Scout. He’ll offer a comforting smile and suggest that Sam’s beautiful children are what’s most important. P6 won’t want to do anything that would upset them in any way.

Other General Hospital spoilers say Monica (Leslie Charleson) will provide reassurance. During a conversation with Jason, Monica will make her position clear. She won’t want Jason to worry about the Patient Six drama or what Sonny (Maurice Benard) and Carly (Laura Wright) believe. Monica will promise Jason that he’ll always be her son.

Meanwhile, Jordan (Vinessa Antoine) will have to big news to share. She’ll tell Carly and Sonny that she has the DNA test results. Patient Six, Jason and Sam will all get updates pretty soon. Jason and P6 will both be revealed as Jason Morgan, but we’ll see how much GH chooses to disclose in the Friday cliffhanger. Monday’s episode will bring the fallout of this apparent twin confirmation.

Across town, Alexis (Nancy Lee Grahn) will turn to Ava (Maura West) for assistance. She’ll describe the trouble Julian’s (William deVry) in and hope that Ava can help out. At GH, Kiki (Haley Erin) will also need a favor. She’ll ask Dr. Bensch (James DePaiva) if he can pitch in on something, so she’ll probably want his thoughts on the formula Ava was given. 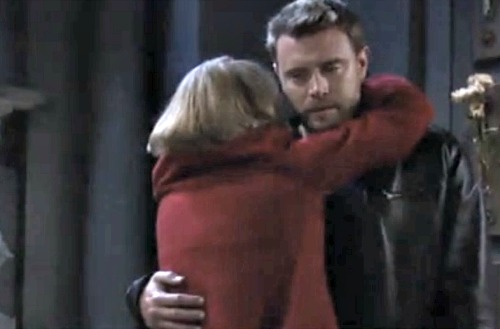 Griffin (Matt Cohen) will hear about this formula, too. He may be wary of Ava trusting anything that comes from Dr. Klein (Gene Farber). Naturally, Ava will only be concerned about restoring her face to its former glory. Since Patient Six obtained the notes for this procedure, Ava will believe everything’s legit.

Will a lovers’ spat emerge from all this? We’ll keep you posted as other General Hospital details come in. Stay tuned to ABC’s GH and don’t forget to check CDL often for the latest General Hospital spoilers, updates and news.