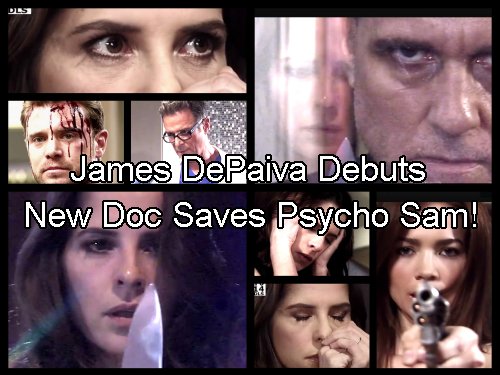 New General Hospital (GH) spoilers from a hot GH promo reveal the role that new guy James DePaiva will be playing and also offers some insight into Sam Morgan’s (Kelly Monaco) health struggle. The promo starts out asking “What is wrong with Sam?” and it seems everyone wants to know the answer to that question.

In coming days, Sam gets more and more aggressive and erratic and her mom Alexis Davis (Nancy Lee Grahn) asks her “are you okay?” No, Sam is definitely not okay. Sam continues to hallucinate and hear voices and she’s falling apart, but where is all this coming from? Helena Cassadine’s (Constance Towers) curse sure seems like a long shot.

The voices in Sam’s head are telling her “the threat is still out there” and it is, but it seems that someone closer to home is the threat. Sam will soon begin to fixate on Sonny Corinthos (Maurice Benard). The promo shows flashbacks of Jason Morgan (Billy Miller) with the bloody head wound and Liz Webber (Rebecca Herbst) holding a gun on her. 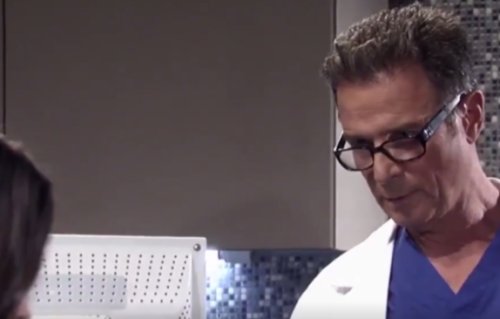 Neither was real, but Sam is losing touch with what’s real and what’s not – and what is a threat and what’s not. GH spoilers promise Sam will lose it and shoot Sonny very soon because she thinks he’s the danger to her way of life. Sam was enraged when Jason went chasing off to Puerto Rico to play hero for Sonny and Carly Corinthos (Laura Wright).

When Jason comes home with a bullet wound, Sam will not listen to reason and will blame Sonny. The good news is, according to this hot new GH promo, Sam finally gets seen by a doc who’s taking her ailment seriously. Sam’s doctor is the new role for James DePaiva so we’ll see him this week and find out his character’s name. 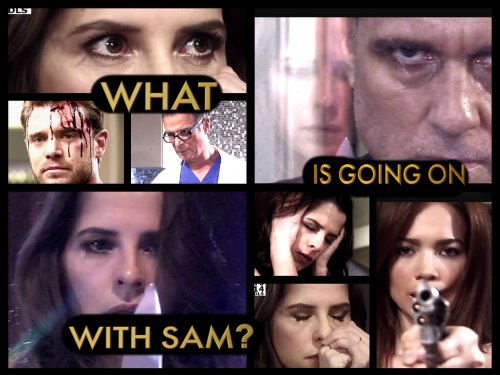 The doc asks Sam “are you okay?” and she replies “maybe not.” It would be great if Sam would finally come clean to a medical professional about her ailment since it’s a big deal. Healthy brains don’t hallucinate bloody and dangerous visions or create haunting voices. Sam is off her rocker and needs diagnosed ASAP.

The guesses on Sam’s condition range from post partum depression to post partum psychosis and from brain tumor to brain worms like Tracy Quartermaine (Jane Elliot) had. We’ll find out more soon but the great thing is Sam’s in good hands with James DePaiva playing doctor with her. Watch the new promo below, share your comments and tune into CDL often for the latest General Hospital spoilers.