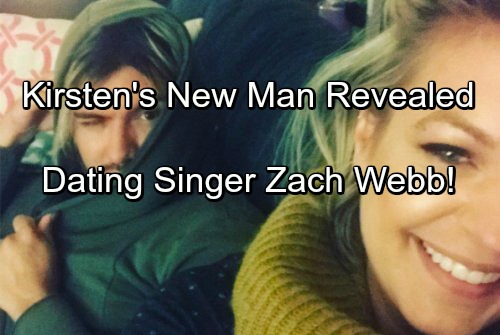 General Hospital (GH) spoilers reveal we finally know the name of GH’s Kirsten Storms’ new man. She’s showed off some pics of her with a guy over the past few weeks, but now she let slip his name. Kirsten Storms is dating musician Zach Webb, lead singer of neo rock band It’s Alive. Last night, Kirsten shared a pic of herself and her new man watching The Bachelorette.

This seems to be her first public romance since her split from hubby Brandon Barash (ex-Johnny Zacchara). Brandon and Kirsten wed in 2013 after dating for a while and share daughter Harper Rose Barash (ex-Georgie Spinelli). Kirsten is supposed to be back on the General Hospital set this week after a three month long hiatus for “personal reasons.” 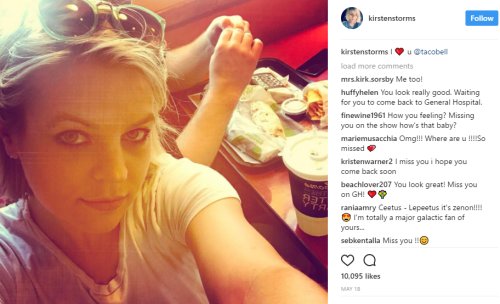 Whatever compelled Kirsten to take a break from General Hospital, she’s looking better than she has in a very long time. The actress has put on some healthy weight, her skin and hair look great, and she seems to be in a good place. And now there’s a new romance! On May 18, Kirsten shared a pic where her date was unseen but she was noshing at Taco Bell with her man.

Then on May 30, Kirsten shared a pic with Zach’s face mostly cropped out and tagged it “Date night.” The next clue about Kirsten’s new romance came four days ago, on June 7 when Kirsten shared a shot of Zach Webb’s music and tagged it “listening to” with an image of It’s Alive song titled “The Bottom.” It seems that Kirsten is supporting (and promoting) her musician boyfriend. 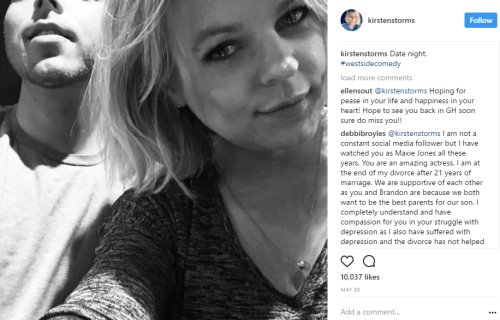 Finally, in the wee hours of Monday, June 12, Kirsten finally name dropped “Zach Webb” and shared a pic of the couple smiling on her sofa watching TV. It looks like the date nights have turned into cozy nights at home. It’s nice to see Kirsten looking so happy after her very public, although amicable, split from ex Brandon Barash and the duo seems to be coparenting happily.

Brandon even clicked like on Kirsten’s Instagram posts of her new romance, so that’s nice. GH fans are still waiting to find out if Brandon Barash has a new sweetie, but so far, if he does, it seems the actor and Port Chuck singer is being circumspect. Most of Brandon’s social media timeline is him with his “best friend” Harper as he chronicles what he calls the adventures of “B and Boo.” 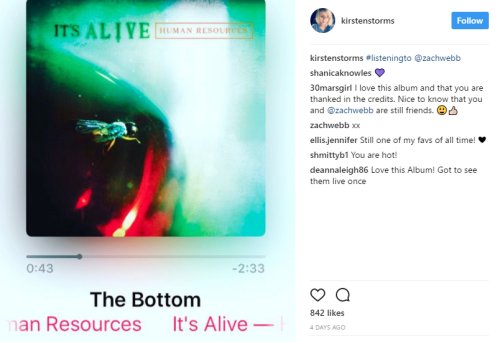 Congratulations to Kirsten Storms on her new romance with singer Zach Webb. Although the actress recently admitted that she struggles with severe depression, she seems to be on a smoother path now and General Hospital fans can’t wait to see her back on the GH soap. Share your comments on Kirsten’s new romance and check back with CDL often for more General Hospital spoilers.