General Hospital Spoilers: Kirsten Storms Spotted Filming on GH Set – Puts Depression Battle Behind Her to Get Back to Work 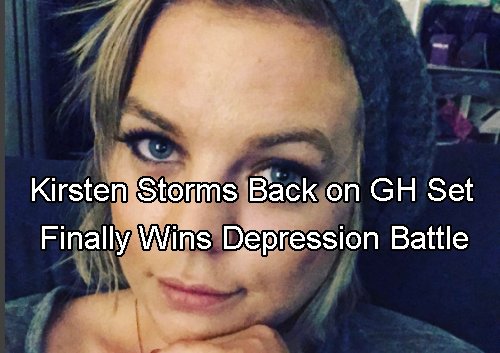 General Hospital (GH) spoilers reveal that Kirsten Storms is back on the GH set and that means brand new Maxie Jones scenes are coming soon. Kirsten shared an Instagram pic of herself in the halls at the ABC Prospect Park studios where the soap films. She was standing next to a giant wall photo of her bestie Emme Rylan (aka Lulu Spencer) and captioned it, “When I stop by GH I stalk @emmerylans’s pictures.” Kirsten was pulling a kissy face in the photo to show her love for her co-star.

While the pic didn’t show Kirsten shooting scenes, she’s back on set working. Kirsten has put on several pounds of healthy weight, as evidenced in new photos of her face that’s almost back to its original perfect plumpness. That means costume fittings are required before she can get to work. Kirsten had lost weight drastically and was rail thin before she took time off General Hospital, so naturally she had to go see wardrobe so they could get her new sizes and stock up on outfits for her return. 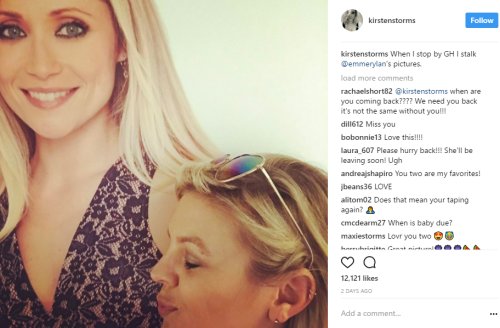 Kirsten also admitted recently on social media that she suffers from severe depression and that was the reason she took time off of General Hospital. Now it appears that whatever treatment program or protocol Kirsten has pursued paid off because she looks happy and healthy in recent photos. And now Kirsten is back on the GH set so we can expect to see Maxie back in Port Charles soon. But what will Maxie get into when she comes back to town?

Nathan West (Ryan Paevey) is now a reluctant pal and co-conspirator with Amy Driscoll (Risa Dorken) in this Man Landers advice website and Nathan doesn’t know it yet, but Amy leveraged the popularity of the blog into a book deal. Will Nathan go along with the book deal so he can split the cash with Amy and use it to finally buy himself and Maxie a house? Maxie won’t like coming home to find Nathan getting chummy with Amy since Maxie was so awful to her in high school. 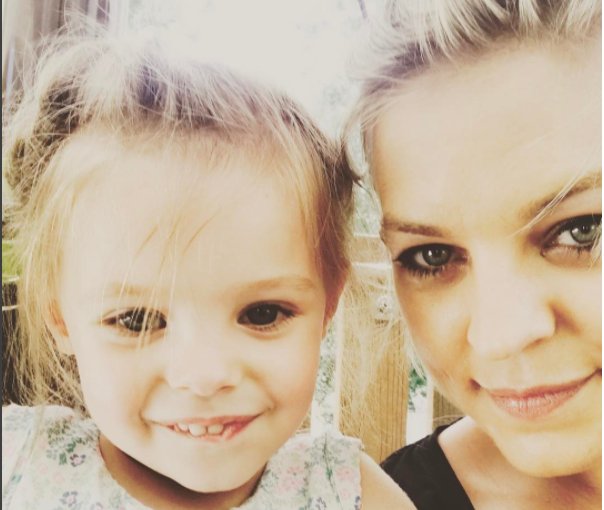 General Hospital spoilers abound that Maxie will try and bully Amy again, but Amy is not the same girl she was in high school and will stand up to her. Maxie might also find herself facing Nathan’s dislike over her treatment of Amy. Nathan is a truly good guy and won’t like seeing his wife be mean to someone like that. Nathan wants a warm homecoming with Maxie but Amy and Damian Spinelli (Bradford Anderson) could throw cold water on their hot reunion.

Spinelli hits Port Charles about the same time as Maxie and spoilers hint the exes will show up together with their daughter Georgie Spinelli (formerly Harper Rose Barash, Kirsten’s daughter with ex-husband Brandon Barash). One thing is certain. No matter what dramatic reunion storyline the GH writers have crafted, GH fans will be thrilled to have Kirsten Storms back. Share your comments below and tune into CDL often for the latest General Hospital spoilers, news and updates.