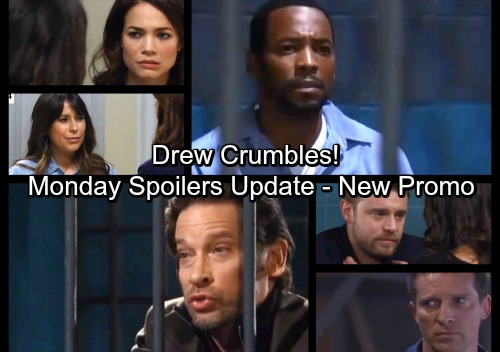 General Hospital (GH) spoilers update for Monday, December 4, tease that we’ll see the brutal aftermath of the big reveal. Now that Billy Miller’s character knows he’s actually Drew, he’ll have a hard time coping. Drew will fear that his life is slipping through his fingers. He’ll understand that changes are inevitable since Steve Burton’s character was declared Jason.

As Drew deals with his concerns, Sam (Kelly Monaco) will vow to stay right by his side. She’ll promise that they’re a team and can handle whatever obstacles come their way. Meanwhile, Alexis (Nancy Lee Grahn) will try to protect Sam’s heart. She’ll have a private conversation with Jason and it appears she’ll urge him to let go of Sam.

Alexis will acknowledge that Jason might be tempted to win back his love, but he’ll assure her that he has no intention of destroying her happiness. If Sam wants to be with Drew, Jason can accept that. Across town, Josslyn (Eden McCoy) and Oscar (Garren Stitt) will chat about the upcoming DNA test results. Joss will point out that Oscar’s going to learn the truth soon.

Oscar will hope that answers are just a day away, but he could be looking at a longer search if Drew’s not his father. GH fans will definitely want to stay tuned for the rest of this mystery. Elsewhere, Michael (Chad Duell) will have an awkward meeting with Nelle (Chloe Lanier). She’ll admit that she did some Christmas shopping before they broke up. The presents were apparently just shipped to her. 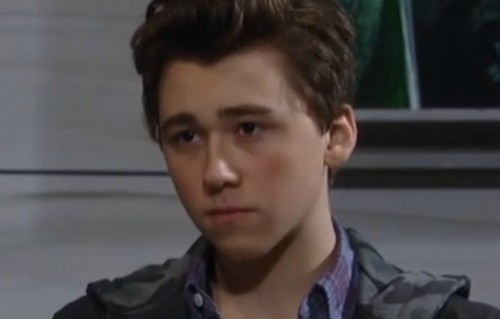 General Hospital spoilers state that Nelle will have a gift to pass along to Josslyn. When Michael sees the thought Nelle put into it, he’ll have a pang of regret. Michael will briefly consider getting back together with Nelle, but Lulu (Emme Rylan) and Maxie’s (Kirsten Storms) discovery will prevent that later this week.

Other General Hospital spoilers say Andre (Anthony Montgomery) will reflect on his actions as he sits behind bars. Of course, he won’t remain in silence for long. Franco (Roger Howarth) will waltz in and demand a quick session. He might wonder what he’s supposed to do now that the truth is out in the open.

Franco will feel guilty about hiding evidence that could’ve cleared things up sooner. However, he also knows he has the chance to get off scot-free. Unfortunately, there’s no way Franco will escape punishment entirely. Someone’s bound to find out about the crucial secret he kept. Liz (Rebecca Herbst) won’t be pleased when that moment eventually comes!

Speaking of Liz, she’ll encounter Robin (Kimberly McCullough) in Monday’s episode. GH spoilers say Robin will surprise Liz by asking her not to do something. Is this about Jake (Hudson West)? Is Robin speaking up for Jason’s right to be in his son’s life? Perhaps she won’t want Liz to shut Jason out.

Liz definitely plans on letting Jason and Jake bond down the road, so maybe Robin will bump up the timeline. We’ll give you updates as other General Hospital news comes in. Stick with the ABC soap and don’t forget to check CDL often for the latest General Hospital spoilers, updates and news.