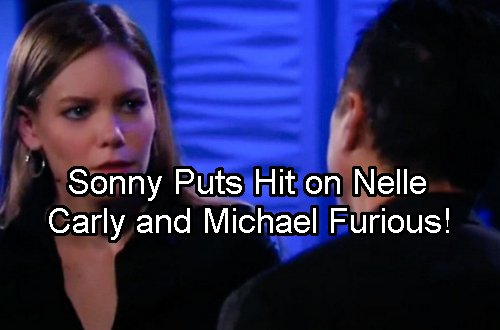 General Hospital (GH) spoilers reveal that Nelle Hayes (Chloe Lanier) will escalate her revenge plan against Carly Corinthos (Laura Wright) after the nasty threats from Sonny Corinthos (Maurice Benard). CarSon will explode soon and the fallout will be spectacular.

Nelle just learned that Felicia Scorpio (Kristina Wagner) was lying to her and digging into her life on behalf of Bobbie Spencer (Jacklyn Zeman) so she was already on edge when Sonny showed up to the MetroCourt with her bra in his pocket making accusations.

Sonny made Nelle cry and is confident that he scared her into submission with his threats to kill her if Carly finds out, but he did the opposite instead. Sonny always thinks death threats will subdue his enemies but he’s wrong in this case. His plans never work out. 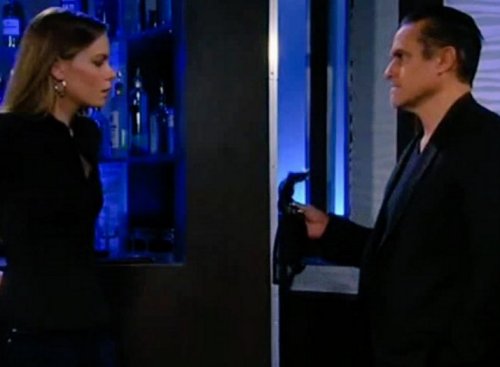 Nelle might have been frightened in that moment but all he did was strengthen her resolve. It seems that Nelle isn’t scared to die. She’s got a revenge plan and has her dead father Frank Benson (Corbin Bernsen) on her mind. She won’t let Sonny’s threats stop her.

After Sonny left the restaurant, Nelle replayed the recording she made of Sonny confessing to sleeping with her. Then she pledged to reveal it to Carly. Nelle will play the victim card when she spills all the dirt to Carly. She can even tell her that Sonny found her bra and threatened her life.

Carly just lost Morgan Corinthos (Bryan Craig) so she’s on edge about her children’s lives. Since Nelle saved Josslyn Jacks (Eden McCoy) with a kidney donation, Carly won’t take it well that Sonny threatened to kill her after “taking advantage” when he was drunk. 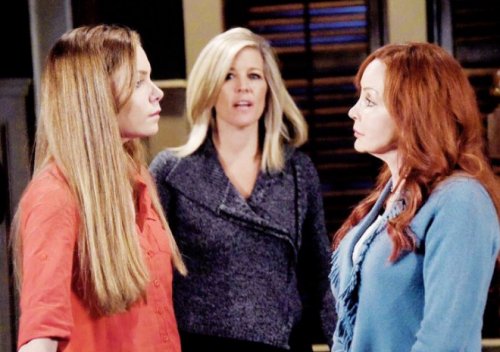 Sonny and Bobbie see Nelle as the schemer she is, but Carly sees her as a saint and so does Michael Quartermaine (Chad Duell). When the ugly cheating truth comes out, GH spoilers tease that Sonny will do as he promised and takes out a hit on Nelle and then his marriage really implodes.

Carly will be furious at Sonny and there may not be any coming back from him planning to murder the young girl that saved Joss’ life. Carly sees Nelle as a victim for her parents selling her kidney, then a victim of Sonny taking advantage and bedding her – and then a victim again over the hit.

Carly will stand up for Nelle and rage at Sonny. She may well tell him that if Nelle dies, he can forget ever seeing her or the children again. Plus, Michael found a way to forgive Sonny for killing AJ Quartermaine (Sean Kanan) but this would be too much. 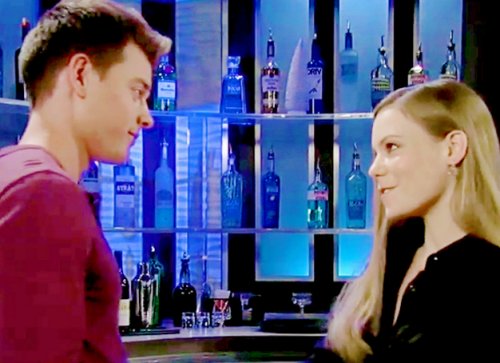 Michael has fallen for Nelle and if Sonny killed her too, his oldest son would walk away. Carly could also take Avery from him over the hit and help Ava Jerome (Maura West) get her back. Even Kristina Corinthos (Lexi Ainsworth), who’s always loyal, could walk away.

Will Sonny lose everything when he takes out a hit on Nelle? Will Nelle win this round in her revenge game? Share your comments and tune into CDL often for the latest General Hospital spoilers, news and updates.

Love is in the air around Port Charles … Ava is being framed and Anna makes a startling confession, all new #GH coming your way tomorrow! pic.twitter.com/20TKB8V2Aw

From backstage at #GH @dom_zamprogna has the details on today’s romantic and heart pounding episode! pic.twitter.com/bjjpHGjWze